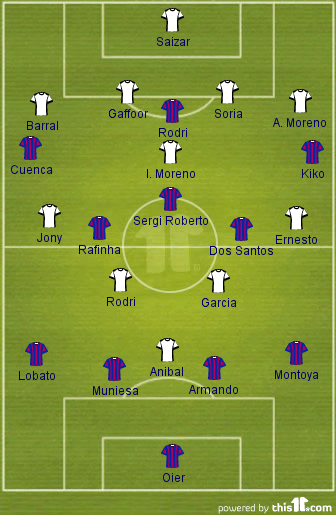 Going into this match Barcelona B found themselves in 19th place with only one victory after seven matches while CD Guadalajara maned the 9th spot.

Manager Eusebio sent out a very different starting eleven than he did a week ago, but he lined them up in a classic Barcelona 4-3-3 formation. But ultimately it made no big difference as Barcelona B again failed to win.

The trend all season has been that Barca B control possession from the opening whistle and this time was no different. Even though Guadalajara had to play without the ball for long periods of time they had a few good runs toward Oier's goal, but especially Marc Muniesa was strong defensively.

Barca B's wingers, Isaac Cuenca and Kiko Femenia were very lively in the early going as both made good runs down their respective flanks. However, only Cuenca managed to get a shot on goal and even that one was from a nearly impossible angle to score. Cristian Lobato joined the offensive action and tried his luck from long range, after he recover the ball in midfield, but ball went a yard wide of the Saizer's left post. Dos Santos then threaded the ball through the defense to Rodri, but Saizer reacted well and collected the ball before the young striker could take the shot.

The visitors had their flashes on attack and mostly it was at the expense of Armando. The experienced center back tried to guard the ball so it would go out of play, but was careless and lost the ball to Anibal who fired a strong shot on goal, but Muniesa managed to block it. A few minute later Anibal dribbled past Armando on the left side and fired a brilliant shot to the top left corner of Oier's goal to put the visitors in front.

Barca B pressed hard for the equalizer before the break, but even their best attempts were turned away by the in-form Saizar. Firstly Sergi Roberto got a shot on net after a quick counter, and then Cuenca fired a strong shot from just outside of the box, but both attempts were one-handed away by the keeper. Therefore the entertaining first half ended with Guadalajara taking a one goal lead to the changing room courtesy of a golazo from Anibal.

No changes were made during halftime. The second half started in a bizarre way as the hosts had to re-kick the kickoff, something you see very rarely. The reserves remained composed and again started to dominate possession, creating changes, though, was very difficult against the organized Guadalajara defense, at least at the beginning.

In need of a goal, Barcelona B started playing with a higher defensive line and especially Martin Montoya was more involved offensively. The total domination had to result in chances sooner or later and the first one came when Rodri had an opportunity to put Barca on the board, but a last ditch tackle by Gaffoor averted the threat.

In the 57th mintue both Gerard Deulofeu and Espinhosa entered the pitch. Rodri, who missed a few chances, and Kiko, who apart from a few good runs down the right side didn't show much, left the pitch.

Just minutes after he came on the pitch, Espinosa had one of the best chances of the match, but his shot was held by Saizar. In the 67th minute Barcelona B were awarded a free kick in the middle of the pitch and just inches away from the penalty box. Rafinha fired a strong shot that was amazingly saved, but the rebound fell to Sergi Roberto who made no mistake from close range. The hosts didn't take the foot of the gas and quickly started creating new chances to take the lead, but they couldn't find a way past Saizar, at least not officially.

The chance of the match for the B team came in the 75th minute when a penalty kick was awarded as Antonio Moreno brought down Rafinha in the box after the youngster made a brilliant run from the left side. Sergi Roberto stepped up and fired the ball into the back of the net, but because Armando and two Guadalajara players were standing in the box at the time of the kick Sergi had to retake it. The second time he was stopped by Saizar. Sergi Roberto tried to redeem himself three minutes later, but his shot bounced off the frame of the goal. Soon thereafter Eusebio made the last substitution of the match as he replaced the hard-luck Sergi Roberto with Carmona.

Not only did Guadalajara manage to hold off Barcelona B for the remainder of the match, they were able to score. They created next to nothing in the second half, but scored the shocking game winner in the 93rd minute when Javi Soria headed the ball past Oier after a long free kick. So, despite having very few chances throughout the match Guadalajara leave Mini Estadi with the three points.

Eusebio still appears to be searching for his ideal starting eleven, but he should take note that his team created much more chances after Deulofeu and Espinosa replaced Rodri and Kiko. The really bad start to the season, though, might not allow Eusebio to experiment much longer because a team as talented as this needs to get better results.

Barcelona B will be looking for their second victory of the season next week against Alcoyano.