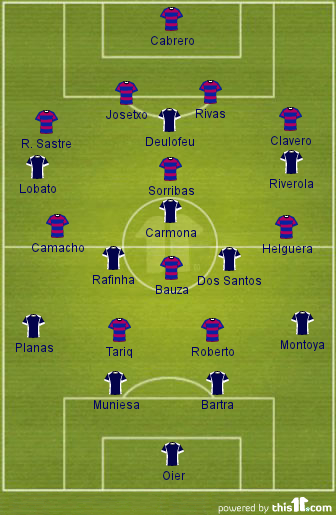 *Note: Barcelona players are in black and white shirts*

Today's recap of the action is going to be a (relatively) short one as this game was not covered by any TV station. Therefore I had to rely on tweets from writer and producer of Esport RAC 1, Gerard Romero, who was attending the match and was giving real-time updates.

Barca B again started the match well, with good control of the ball, but creating a scoring chance proved to be difficult. Against the flow the first good chance went to Huesca, but Roberto's shot was straight at Oier who had no problem smothering the ball. Roberto fired another good shot just a few minutes later, but again it was Oier who came out of the matchup as the winner.

Barca B slowly started to turn the scoring chances stat in their favor with the first clear opportunity going to Carlos Carmona, but his shot was expertly saved by goalkeeper Jesús Cabrero. Cabrero was called into action again before the break and he somehow managed to keep a clean sheet until halftime with a couple good saved. Carmona fired a thunderous shot, but unlike against Alcoyano three days ago, this one flew high over the bar. Just seconds later Martí Riverola struck the post with a strong shot.

After some uninspired play by Barcelona B's defense, Huesca had three opportunities to take the lead, but excellent blocks and good goalkeeper kept the visitors scoreless. Cabrero had to made great stop before halftime as Carmona once again fired a shot, but the Aragonese goalie made the brilliant stop, with the tip of his boot.

The second half started with a bang as just three minutes in Riverola finally managed to put the ball past Cabrero with a well placed shot to the far post. Oier made a very good stop on Helguera who looked certain to tie it, but the Barca B keeper managed to get a palm on the ball. Few minutes later Espinosa had a good opportunity to extend the lead, but his shot just missed the target.

Barca B continued pressing toward Cabrero's goal, but the shot-stopper continued his excellent performance. He made another brilliant stop when he saved Gerard Deulofeu's attempt, who probably had his best match of the season. Another Deulofeu shot was stopped just minutes later as Barca B again struggled to find the back of the net. Three minutes were added to the 90 minutes already played, but neither team managed to add to the score.

Barcelona B won their second consecutive game, third overall, and Eusebio's team finally appears to be going in the right direction. Deulofeu, Carmona and Riverola all had an excellent game. If recent matches are any indication, Deulofeu appears to have finally won himself a place in the starting eleven, with Kiko Femenia relegated to bench duties. Kiko was clearly in bad form and the creativity of Deulofeu will give the opposition many headaches.