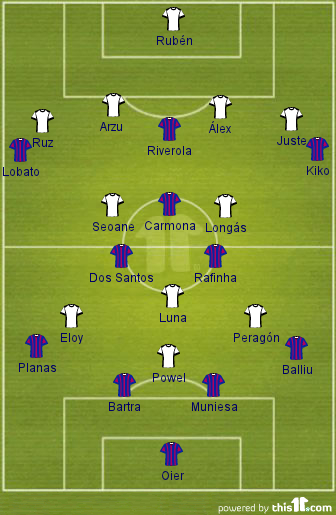 With three Barcelona B players, Isaac Cuenca, Gerard Deulofeu and Martin Montoya, at Pep Guardiola's disposal for the first team match against RCD Mallorca, Eusebio had a difficult task ahead of him. He started the game with no natural strikers as out-of-form Rodri again found himself on the bench while Jonathan Soriano only just returned from an injury and was not ready for 90 minutes. Balliu received a rare opportunity on the right side. Gimnàstic manager Juan Carlos Oliva, on the other side, sent out three forwards and one very offensive minded midfielder as he sensed an opportunity against the shorthanded B side.

Before kickoff Barcelona B wore shirts wishing a speedy recovery to teammate, and midfielder, Ilie Sánchez who for the fourth time this season underwent surgery to repair damage to his Achilles' heel.

In the opening 45 minutes chances were few and far between as Barcelona B once more dominated the ball, but struggled to create scoring chances. Gimnàstic's defense was very organized and at times looked impenetrable, despite the fact that Oliva fielded a very attacking formation. Gimnàstic relied on counter attacks, but because the reserves misplaced very few passes the visitors didn't create much offensively. On the few occasions when the visitors came to the same ZIP code as Oier's net, the defensive duo of Marc Bartra and Marc Muniesa had no difficulties clearing the danger.

As the first half winded down it appeared as if the game would remain scoreless. However, the good performance by the visitors' defense was quickly forgotten when a bad giveaway inside their penalty area allowed Barcelona B to take the lead. Carlos Carmona received the gift from the opposition and he made no mistake, burying the ball past goalkeeper Rubén Iván. This marked just the second time Eusebio's team had the lead at the Mini Estadi this season, in six games.

The second half started much like the first one did, Barca's youth continued to enjoy the bulk up possession while Gimnàstic attacked through counters. Midway through the second half, fans at the Mini Estadi were able to welcome back Jonathan Soriano, who will try to improve the teams' poor goalscoring record. Gimnàstic coach tried to change his team's fate by making three early substitutions, opening his team up and committing to attack. At first this move didn't bring the desired result as the visitors failed to create anything, but later in the game, especially after the 80th minute, Gimnàstic became increasingly more dangerous.

Juste made a terrific run down the wing and sent a dangerous cross toward a crowd inside the penalty area, but Muniesa made a last second intervention to prevent a clear-cut scoring opportunity. Gimnàstic continued to press for the equalizer and were able to create a few good chances, the best one by Xisco who fired a powerful shot on net, but it was straight at Oier, who calmly held it. As the game completely opened up, in the dying minutes, both teams could have added to the score, but neither managed to do so.

When the final whistle sounded, Barcelona B were able to celebrate their third consecutive victory, first one of the season at home. While the team isn't blowing their opposition away it is nice too see Barcelona B return to winning ways, ways we became so accustomed to under Luis Enrique. After dropping to a season low 20th place three match-days ago, the team could potentially rise to 11th after this weekend.