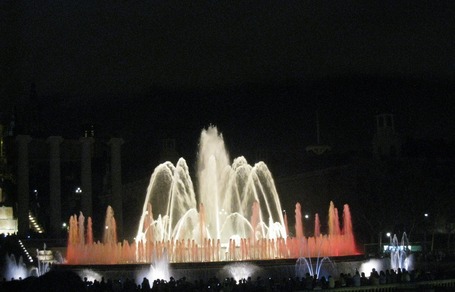 Almost a week has passed since I returned from Barcelona, but I still haven't found the time to share my experience. I'm not going to talk (much) about the FC Barcelona - Sevilla FC game itself, as it was a forgettable one, but I'll rather say a few words about the Camp Nou and the beautiful city that is Barcelona.

Merely looking at the map of the city, you cannot imagine how vast it is. Everywhere you turn the city just seems to continue to the horizon and only when you visit Tibidabo, Barcelona's highest hill, located to the northwest from the town center, you can fully grasp the extent of the Catalan capital.

/*Note: Even with the wide lens the eastern (left) part of the city cannot be seen it this picture*/

There is a saying that goes: "A picture is worth a thousand words", but in this case the picture doesn't give the view justice. When you are on that hill, at 512 m above sea level, half a kilometer above Barcelona, you can't help yourself but to lean on the railing and admire the view as minute after minute pass by.

Taking a scenic bus ride to the other side of the city, to the famous Montjuïc hill, you pass one amazing structure after the other. From the famous bullfighting arena at the Plaça d'Espanya, now converted to a shopping mall, and National Museum of Art (Museu National d'Art de Catalunya) to the Olympic stadium (Anella Olímpica) and Barcelona's port. A must visit is the place to be when FC Barcelona win a trophy, the Plaça de Catalunya. The "Catalonia Square" is Barcelona's main square and is also where Culés go to celebrate whenever their favourite club add a trophy to their already filled trophy case. There is much more to Barcelona than I was able to see in only one extra day, and hopefully I will see more when I will return to Catalonia. 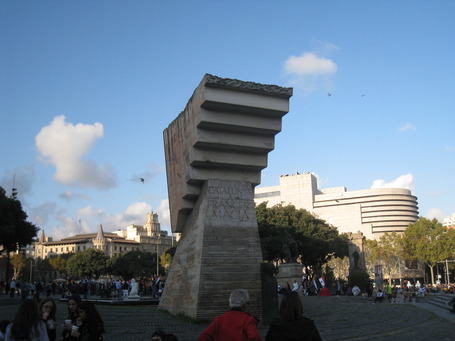 Now we come to the Camp Nou. The stadium is a magnificent structure, rising to the air at the western edge of the city. Once you enter through the stadiums' gate everything is well marked, every section, every row and every seat, so finding your seat is easy. The view from the inside of the stadium is just as magnificent as from the outside. When the boys in blaugrana shirts came out of the tunnel and the Barça hymn started playing the whole stadium started singing. An amazing feeling when you're part of an over 80 thousand strong choir.

But after the opening whistle the atmosphere was quite disappointing. Yes, every good play was rewarded with a good round of applause, but the crowd was mostly quiet. Some of it had to do with the lack of goals, but the crowd should do their best in games when their side is struggling to lift them up with loud cheering. I was at a game with better atmosphere when I went to Maribor to see the Slovenian national side play, and a crown of a mere 12 thousand left their hearts, and voices, in the stands, in a game we lost. Pretty much the only time the whole stadium was cheering was before and after Messi (unsuccessfully) took the last minute penalty. That, in a nutshell, is a recap of my weekend in Barcelona. 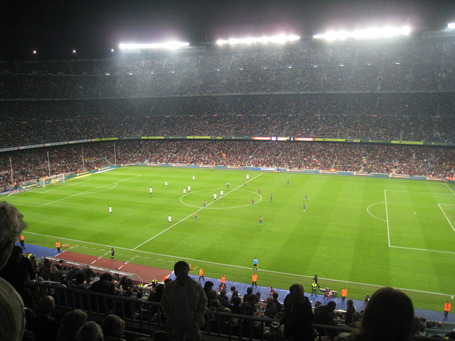 Back to recent events; Barcelona won two games this week, on Tuesday against Granada and on Saturday versus Mallorca. While the former was a difficult 1-0 victory with Barcelona again struggling to find the back of the net, the latter was a comfortable manita win. The game against Mallorca squashed all the worries Barcelona fans had after the last three matches. Lionel Messi scored, a lot, the team played a very good game, Isaac Cuenca scored his first ever goal for Barcelona while Gerard Deulofeu earned his first team debut.

Even though there were many positives in the match against Mallorca, one worrying aspect remains, David Villa. Spain's all-time leading goalscorer is again in one of his goalscoring droughts and if recent games are any indication he is nowhere near ending this bad trend. In better news, Alexis Sanchez is nearing his return to the football pitch, after he was out because of a hamstring injury. He will make the trip to Prague, for the Champions League match against Viktoria Plzeň and if Monday's training goes as planned he will be given the medical all-clear. When Alexis returns the only injured Barca player will be Ibrahim Afellay who will, sadly, remain on the sidelines for many more months to come.