Tuesday night will be pivotal for FC Barcelona, as they look to seal qualification to the knockout stages of the UEFA Champions League with a win against Viktoria Plzen. Fresh off that morale-boosting 5-0 victory over Real Mallorca, it is clear that the Blaugrana are favourites for this one and that the Czech side will have to be at their best to get anything from the match.

Unfortunately for them, they are likely to face the trio of Andres Iniesta, Cesc Fabregas and Xavi Hernandez, all of whom were rested at the weekend. That means possession will be the name of the game for Pep Guardiola’s team on Tuesday, as if it isn’t the rest of the time... 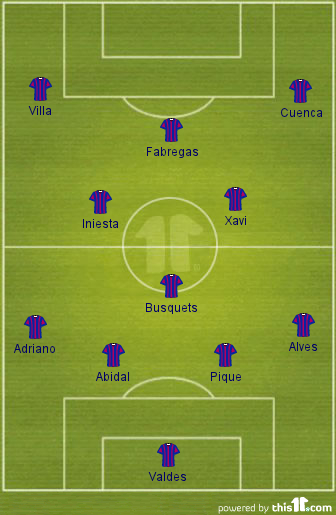 I am expecting a strong line-up on Tuesday, but that XI should be without Lionel Messi. The Argentine was superb on Saturday with a quick-fire hat-trick taking his tally to 19 for the season and 199 overall for FC Barcelona. Despite that, he still needs his rest, and Tuesday is the perfect opportunity; especially as Guardiola will have one eye on San Mames and Athletic Bilbao. In my opinion, dropping Cesc Fabregas to the bench was for one reason, and that was so Messi could be left out for this match.

Behind him will be Andres Iniesta and Xavi Hernandez, meaning that ball possession could reach figures in the high 80%’s. Not only that, but chance creation will be improved, and this could be a blessing for David Villa. Taking a momentary break from criticising his every move, I feel El Guaje will benefit from this ultra-creative midfield combination. Or at least I hope so...

If it isn’t broke, then don’t try to fix it is a popular phrase, and I think this applies to Isaac Cuenca. The youngster was faultless against Mallorca so why not stick with him? Sure, Alexis Sanchez is ready for a comeback, but the last thing we need is to rush the Chilean back and risk a reoccurrence of the injury that sidelined him for so long. I propose another start for Cuenca with Sanchez making a substitute appearance in the second half.

That way, the Chilean could be ready to start against Athletic Bilbao! Such a turn-around would be fantastic considering the original prognosis that proclaimed the summer signing would be out of action until the middle of November.

Sergio Busquets was substituted before the hour-mark on Saturday, meaning that we should see the Spanish lynchpin from the start. I would expect either Carles Puyol or Gerard Pique to start in defense as well, but again looking ahead to the trip to Bilbao, I cannot see both of them starting. Whichever Pep chooses is likely to start alongside Eric Abidal with Javier Mascherano being temporarily demoted to the bench.

Dani Alves is likely to start at right-back, though I wouldn’t mind seeing Martin Montoya given a rare start if Guardiola keeps him in the squad. The other full-back is up for grabs, but I feel Maxwell will have to settle for a place on the bench and Adriano will attempt to continue his good form. Victor Valdes will obviously start in goal, and he is only 30-odd minutes away from setting a new club record for minutes without conceding.

This would surpass the previous landmark which I believe was set by Miguel Reina (father of current Liverpool keeper Pepe Reina).

Viktoria Plzen also won 5-0 at the weekend, and the "Czech Barcelona" will know that Tuesday will be a much bigger test. That being said, Plzen will feel more optimistic than most. The match at the Camp Nou had the potential to be embarrassing, but they put in a good show to keep the score down to 2-0. Plzen even managed to keep the ball away from the Catalans on the odd occasion!

On the other hand, I cannot see anything other than a Barcelona win, but so long as Valdes breaks that record and Messi stays on the bench, I am not too fussed. But hey, I was way out for the weekend when predicting the line-up, so feel free to disregard my guess completely and provide your own below.

Match Prediction: FC Barcelona to win 3-0 with goals from Cesc and hopefully Villa.