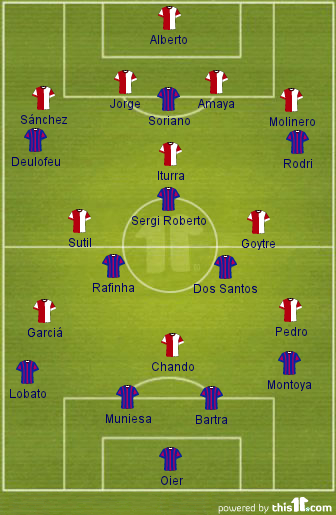 After two consecutive draws, Barcelona B were looking to return to winning ways against Real Murcia. Murcia came into this game in 6th place, six points ahead of the B team which occupied 14th place.

The game started slow and neither team was able to make a string of long passes, but Barcelona B grew increasingly more dangerous after they managed to control the ball for longer periods of time. It took the visitors ten minutes to get their first shot on target, Jonathan Dos Santos set up Jonathan Soriano who fired on net, but saw his attempt saved. Shortly thereafter Sergi Roberto missed a clear-cut opportunity to put Barcelona in front.

Barca B continued to press forward and while chances were aplenty goals were not. Around the half hour mark Rodri, Marc Bartra and Gerard Deulofeu all got involved offensively, but none of their attempts found the back of the net. The remaining 15 minutes in the first half provided no drama and at this point it was looking like one of those games where the B team creates several chances, but can't find the net and in the end drop points.

The previous sentence looked even more real when just after the break Murcia launched a quick attack, but their attempt was masterfully saved by Oier Olazabal. 14 minutes later Oier was again saving Barcelona with another terrific stop. Around that same time the hardworking Cristian Tello replaced Rodri and that proved to be the spark for Eusebio's side as the team soon regained control of the match. In the 65th minute the visitors finally put one past goalkeeper Alberto. Martin Montoya rushed down the right side and sent a cross to near the penalty spot where Deulofeu controlled it and fired it into the back of the net.

The goal further boosted the visitors' confidence and the B team piled on the pressure. Tello quickly became very involved as he often tested the Murcia keeper. Sergi Roberto looked like he added to Barcelona's lead, but his goal was disallowed for offside. While no replay showed the play from the correct angle, Sergi did look in line with the last defender from the angles that were shown. The game was finally put out of reach in the 87th minute when Tello scored after receiving a brilliant pass from Rafinha. With the goal Tello tied himself with Rodri and Deulofeu in second place on Barcelona B's goalscoring list at three.

Despite two consecutive draws before this game, this team has been playing good football lately and Eusebio's team is now unbeaten in six games. Eusebio, it appears, has also finally decided who his starting center-back pair will be. Bartra and Marc Muniesa have been terrific together and of the five games the two have played together the team has won four and drew one.

Next week Barcelona B welcome Celta de Vigo to the Miniestadi.