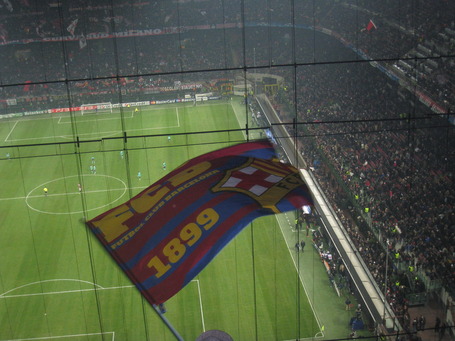 It's been well over a day since I returned from the magnificent Champions League game between AC Milan and FC Barcelona. Since then I was able to get not one, but two, quality shut-eyes and watch a replay of the match and while the game looked terrific on TV you cannot compare it to the feeling you have when you sit in the stadium. But let's start at the beginning.

5AM, yes, I woke up at five in the morning so I wouldn't miss the bus taking 17 member of Penya Blaugrana Eslovénia to Milan. While I don't have a picture of the bus I'm sure you all know how one looks like. In case you don't, here's one that's similar to ours, but this one has a better paint job. 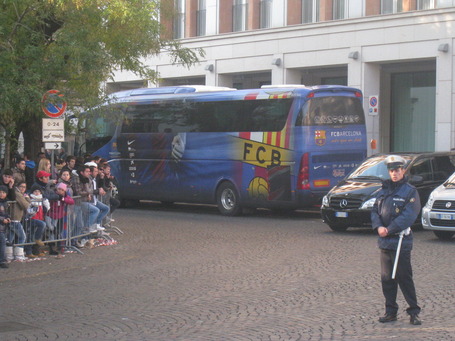 If you were wondering, yes, this is the official FC Barcelona bus that drives players and the staff from the hotel (seen behind the bus) to the stadium and then to the airport.

It took roughly eight hours to get to Milan from where I live, but believe me, it was all worth it. A short walk from the Barça bus you get to the most magnificent structure you will find in the city, the Duomo di Milano. 160 meters long, 90 meters wide and 45 meters high, the Milan Cathedral is a building you can't comprehend until you see it in front of you. 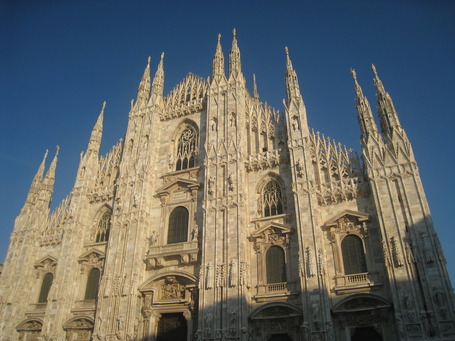 At the Cathedral was the proposed meeting point for Slovenian Barcelona fans, but for some reason around 150 didn't show up. The rest of us that were there along with about 20 Culés from around the world got into a chant-off (is that a word?) with Milanistas. While the numbers weren't on our side (it was about 200 to 50 for Milan) we were just as loud if not louder than the Milan fans. You heard every possible chant as well as the Cant del Barça and Milan replied with one of their own. The neutral audience started laughing when we replied to an Ibra chant with "Messi, Messi, Messi!".

A tram ride later we found ourselves at the San Siro, where we managed to get some face time with three different TV stations. While the San Siro is a magnificent stadium it is nothing compared to the Camp Nou. And the towers that lead you to the seats are just plain awful. I don't know how many circles you make that you get to the top, but when you do you're slightly dizzy. 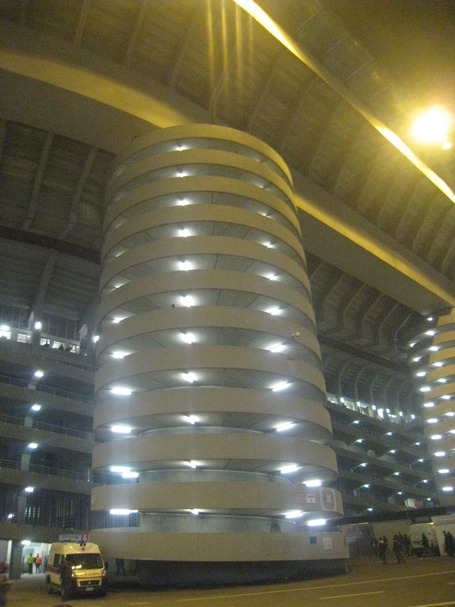 My seat was on the 3rd tier, behind the north goal. The view from there is great, you see the whole pitch the whole time and it was the Barcelona section. The only problem was the pesky net that is in front of you. The net is there so fans don't throw object to the lower tier where Milan fans are sitting. While I do agree with the reasoning for the net I do not agree with the way it looks like. It looks like seven year old Chinese kids made it and it has numerous lines that are too wide and obscure the view. In sections where the net is normal you have no problems seeing the action. 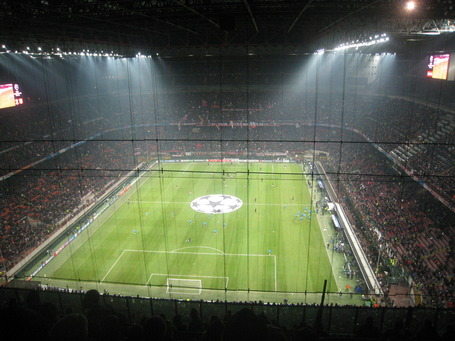 When the game started the atmosphere was electric and of the sellout crowd of 80.000 only about 5.000 were Barcelona fans. It didn't matter. Most of the cheering came from the Barça section, but on the occasions when Milan had something to cheer for, when all 75.000 started screaming, you get goose bumps. The acoustics are amazing and it made me think that the Camp Nou wouldn't be so quiet if it had a roof. In Barcelona all the noise gets lost upward while in San Siro the sound bounces back in from the metal roof and it leads to a great atmosphere.

After going 90+ minutes without a goal when I first watched Barcelona play live it didn't take long too see my first Barça goal. Technically it wasn't scored by one of the guys in green, but it counts nonetheless. Sadly it didn't take long for me to see the first goal against and for some annoying reason it had to be Ibraflop. When he scored the stadium exploded and I mean exploded. Every Milanista was on his feet cheering and jumping. Thankfully Lionel Messi soon put things back in order and silenced the stadium. 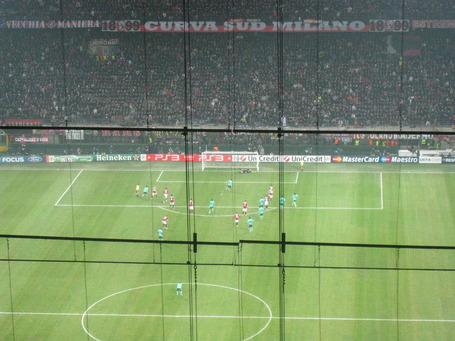 In the second half the ambient wasn't so electrifying, but that changed after the terrific goal by Kevin-Prince Boateng. At this point I started to think about all the games that ended in a 2-2 draw and the 2-2 curse, but Messi and Xavi came to the rescue and secured the three points and the first place in group H. 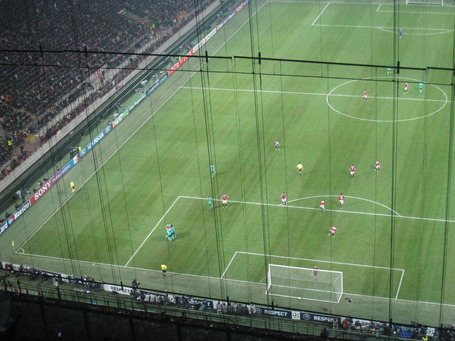 When the game was over the 5000 Culés accompanied Barcelona players off the pitch with laud chanting and the players thanked us with an applause.

Only one thing left to say: ¡Visca el Barça!