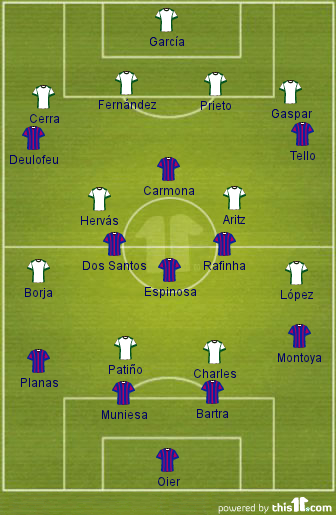 The winning streak is over. Barcelona B faced off against a difficult opponent in Cordoba, a team that has this season collected four more points than Eusebio's team. Eusebio once again fielded a team without a natural striker, as the two forwards on the pitch, Gerard Deulofeu and Cristian Tello found themselves on the wing.

The opening 30 minutes belonged to Barcelona B, as the visitors controlled the ball and were constantly buzzing around Alberto García's net. Just six minutes in Carlos Carmona played a through pass to Gerard Deulofeu, who was storming in from the right wing, and the winger pushed the ball past García and inside the far post. While the visitors did control the ball for much of the match the passing wasn't as crisp as usually, which allowed Cordoba to create many half-chances. Luckily for the B side, Cordoba wasn't executing well.

On a quick counter Cordoba tried to outplay Barca's defense with a high 40 yard pass and it almost worked. Martin Montoya tried to leave the ball for keeper Oier Olazabal, but the onrushing Charles got his right foot on the ball and fired on net, but the ball went inches wide of the left post. Rafinha countered and tried to set up Deulofeu on the left side, but the young winger couldn't handle the pass. Had he done so he would've been all alone in front of the net.

In the second part of the first half Cordoba took control of the play and proved to be very dangerous, but the defense was able to withstand the pressure, barely. With Montoya pushed up on the right side, playing very offensively, Cordoba was usually able to exploit the vast opening on that side. Crosses from that side, from José López, were always on target and Cordoba deserved to score at least one before the break, but pretty much all of their shots were straight at Oier. Borja also fired a strong shot on net from the right side which Oier was able to push away, but the ball fell to Patiño who was in a perfect scoring position, but his weak volley was cleared before the goalline.

To end the half Barca was able to launch a counter with Deulofeu dangling in from the left side who, when he reached the middle of the pitch, left the ball to Espinosa. The midfielder fired on net and only a strong save by Garcia was able to keep Cordoba within one.

After the restart Barcelona B again started to control the pace of the game, but save for a few runs down the wing by Deulofeu they didn't create much. With possession difficult to come by Cordoba relied on counters, but the defence, including Montoya who was more defensively oriented this half, were able to hold Cordoba scoreless, at least for a while that is. After a free kick on the right side, Cordoba's Charles found himself one-on-one with Oier, but his low shot was expertly saved by the keeper.

61 minutes in Eusebio finally started playing with a natural striker as Jonathan Soriano entered the pitch while Deulofeu took a seat on the bench. It didn't change much for Barcelona as Cordoba increased pressure, and the pressure finally paid off. In the 69th minute López sent a cross from the left and from near the penalty spot Charles struck a powerful drive that was somehow stopped by Oier, but the rebound fell to Borja who tucked it into the unguarded part of the net. Just seconds later López Silva fired on net from 20 yards out, but Oier was able to keep it level.

After conceding the equaliser Barcelona started to play better and threatened to score on a handful occasions. The best opportunity to break the tie came when Soriano lost his marker inside the penalty area, but his powerful shot went high and wide. With almost everybody attacking Barcelona B forgot about their defensive responsibilities and the hosts came within inches of taking the lead as Alberto's shot barely missed the target. In the final minute of added time Soriano had the opportunity to win the game as he looked to receive a low cross from Carles Planas, but the striker wasn't able to redirect the ball into the net. Therefore the game ended with each team scoring one goal.

Both teams will feel they could have won the game as both had numerous chances to add to the score. Barcelona B started the match very well and also ended it on a high note, but the period in between cost them the victory. However, a lot of credit has to go to Cordoba whose aggressive play forced the reserves to make (too) many mistakes. Next week Barcelona B welcome Catalan rival Girona to the Miniestadi.