The UEFA Champions League is a fine competition and many would argue (myself included) that is the pinnacle of club football. The best teams face each other home and away, thus proving one is undisputedly better than the other, before a final is contested on neutral ground to prove the best of the best so to speak. Of course, teams can get lucky along the way, whether it is through an "easy" draw, or via a contentious decision to call handball when the perpetrator was standing just a couple of feet away from the ball, couldn’t have possibly reacted, and had their hands by their stomach (Me? Bitter?).

Some have gone as far as saying that you need your fair share of luck to succeed in this mighty competition, as well as quality in abundance. I would agree with them, but before we can get to these prestige matches and controversy we must first whittle down the teams to 16. This is to separate the men from the boys so to speak, but in Barcelona’s case, it has already been done. Both FC Barcelona and AC Milan have secured their place in the knockout stages as expected. The group is all but over, save for the tedium of a final set of group games and the honour – or ignominy depending on your situation – of third place, ensuring a drop into the Europa League.

I love the Champions League, but it is hard to get excited for tomorrow’s match, especially as the previous fixture between the two (on Belarusian soil no less) ended 5-0 to Barcelona. We know who is better; all tomorrow will tell us is whether the youth and fringe players (Gerard Pique aside) are better than the same opposition. If I were a manager, I would be bemoaning this fixture as a waste of time, but luckily Pep Guardiola is in charge, and he will ensure that no-one’s focus is on El Clasico.

Though I am not just thinking of our own players, this is so demoralising for the BATE Borisov players. Turning up at the Camp Nou with a full-strength side, they have to engineer a win to remain in Europe. This is motivation enough, but if they lose, then they return to Belarus having lost to what will effectively be Barcelona B. What does that say about Belarusian football? Well, that’s not for me to say.

BATE Borisov are far from a household name like this Barcelona side are, but there are a few more recognisable names amongst their squad. Mateja Kezman is the biggest name, although the Serbian journeyman is unlikely to start tomorrow evening. Ryhor Filipenko, officially known as Egor Filipenko is a decent young centre-back and his physicality could pose a threat for the Barcelona strikeforce. However, standing at 1.90m tall and weighing in at 85kg, it is unlikely that the Spartak Moscow loanee will be able to cope with the mobility of the very same attack.

Also in the squad is Maksim Skavysh, a relatively young striker tipped to have a bright future in the game along with five other of the successful under-21 side that finished 3rd in the summer’s European Championship.

BATE Borisov are coached by 34 year-old Viktor Goncharenko. Once a player at BATE, he was forced to retire at the young age of 25 due to injury, and the former defender has become one of the brightest managerial prospects in Eastern Europe.

Winning the domestic league on every occasion since his appointment, Goncharenko is the mastermind behind BATE’s relative success on the European stage. He was the first man to lead a Belarusian club into the group stages of both the Champions League and Europa League, and last season he guided BATE Borisov to the round of 16 in the Europa League, which is no mean feat. In the corresponding fixture that took place at the Dynama Stadium in Minsk he opted for a defensive outlook which was promptly torn apart by the Blaugrana. Does he try again in that manner, or is he a little bolder in his tactics? As BATE need a win, he may not have a choice, and given the squad list, Goncharenko could fancy his chances. 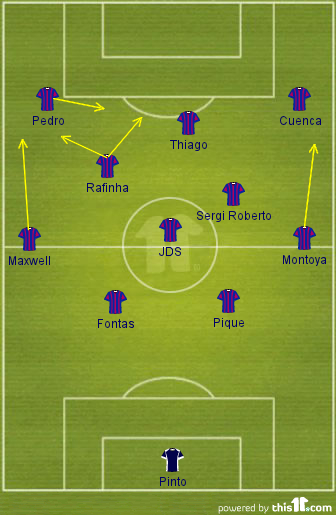 Barcelona will start with Jose Manuel Pinto in goal and the dreadlocked keeper is sure to get in trouble some way or another. If memory serves me correctly, his last start in the Champions League led to the infamous "whistle" and he has only recently served a suspension for that brawl in last year’s semi-final. I would settle for a quiet 90 minutes from the Zamora winning keeper.

Judging by the select few first team players called up to the squad, Pep wants the defense to lead by example, with Gerard Pique almost certain to captain the side tomorrow evening. Maxwell should start at left-back and Andreu Fontas may get a chance to prove his worth alongside Pique. On the other hand, Guardiola may feel that Pique and Fontas are too similar to be an effective partnership, and this could lead to a rare start for Marc Bartra or Sergi Gomez. The former was recently crowned as best newcomer into the Segunda division, while the latter is tipped as a future centre back for both Spain and FC Barcelona.

Regardless of who claims the final centre-back slot, Martin Montoya will (barring a catastrophe) finally start a game at right-back. Montoya is held in high regard by just about everyone at the club, and personally, I would love to see him given 90 minutes. He is unfortunate to have Dani Alves ahead of him, but Montoya’s future is bright, so long as he remains at the club.

After the defense is figured out, things start to get a little more difficult to predict. One would assume that Jonathan Dos Santos is the closest thing the Blaugrana have to a holding midfielder and therefore he could start there, but he is equally adept in the centre of midfield and at right-back. JDS is a typical utility player, perhaps why he was retained when his brother was cast aside. Should JDS not start in defensive midfield, I can only see one viable option and that is to move Thiago back, but I think Pep will have a special plan for him...

The midfield will likely be completed with Rafinha Alcantara taking up the role that Andres Iniesta would usually fill and Sergi Roberto acting as Xavi so to speak. Marti Riverola rounds up the midfield options, although I expect he is merely there to make up the numbers.

Pedro and Isaac Cuenca have been called up to the squad, despite a plethora of alternatives, so it is almost certain that they will start on either wing. Pedro scored in the last fixture between the two and it would be beneficial for all concerned if he could get his name back on the scoresheet and push for a start in El Clasico. Pep will want him leading by example; it’s a lot of pressure, but he must have faith in Pedro’s ability to cope.

Isaac Cuenca will be looking to continue his rich vein of form and against such disciplined opposition his crossing ability will be vital to the team’s success. However, will he suffer without Lionel Messi or Cesc Fabregas around to finish off those chances? It all depends on how well Thiago plays in what could be a new role for the talented midfielder.

There is no Messi or Cesc as I mentioned, which means that there is a void in the middle of the attack. Guardiola did not call up Jonathan Soriano or Rodri, and David Villa was left out yet again and that means that the squad is devoid of a "true" centre-forward. While his brother Rafinha could deputise in the advanced role, I would opt for Thiago to truly showcase his abilities.

Cesc Fabregas has been a revelation in the "free role", and while he does play alongside Lionel Messi, the Alcantara brothers could form a similar partnership. Thiago is skilful, his vision for a pass is as good as any and he poses a threat from just about anywhere on the pitch in any situation. How many times have we seen him score from long-range? Factor in his aerial presence and the goal he scored against Villarreal and we have a man that really could pose a threat to the BATE defense.

Match Prediction: Barcelona to win comfortably, my guess is 3-0 with goals from Thiago and Pedro.