How’s your nerve? Feeling anxious yet? El Clasico is merely days away and the tension is building. It doesn’t matter where you are; the anticipation; the drama; the debate; it is all building towards a crescendo that rarely disappoints. La Liga could be effectively over after this very match, it is paramount that each side decide on their objectives before the match, and stick to them no matter what. Mid-game tactical switches seldom produce the desired outcome, so both Pep Guardiola and Jose Mourinho will have to get their approach spot on, or risk humiliation.

Such is the quality of each side: if one turns up ill-prepared, the other will likely tear them to shreds. The atmosphere will be bordering on hostile, it will not be a match for the faint-hearted, nor is it 90 minutes for untamed aggression. Instead the two sides will have to stay calm; making umpteen calculations in the blink of an eye so as not to make a mistake and relinquish possession.

The battle will end on the pitch, but beforehand and all-throughout the emphasis will be on the two coaches to outplay the other. Real Madrid have the upper-hand in terms of points, and arguably in terms of previous matches heading into the weekend, although I am not too sure...

The Supercopa was a spectacle. It was everything the Champions League semi-finals promised to be, albeit with added brawling. Each match was played at a ferocious tempo and Madrid dictated that tempo with their unrelenting "full-court" pressure. Barcelona were faced with two or sometimes three challengers as soon as they won possession, hence they had to move the ball quicker, thus raising the tempo. As Mourinho knows, that was the worst possible situation for the Blaugrana.

It forced them into mistakes, many more than we have become accustomed to in the past few years at least. Players were mis-controlling passes, or worse, misplacing them altogether. Jose Mourinho is the expert at this theory: put people under pressure and they will invariably fail to perform. All throughout life we are subjected to varying degrees of pressure, whether it is exams, deadlines at work, or controlling a pass from Gerard Pique in El Clasico. How we deal with that pressure is what makes us who we are, and it is a valuable skill to be able to cope under pressure.

Football is no different, and if you cannot deal with that pressure then you will become a liability for your team. However, with Mourinho, this pressure becomes a way of life. He deflects the criticism away from his players at all times, whether it is through slanderous post-match interviews or some kooky antics on the touchline. Then he exacts pressure on his opposing managers by engaging in all manners of mind-games before the referees get their share.

This is how Jose Mourinho has found success, by dealing with pressure and exacting it on the right people, although in the case of the Supercopa, it did not secure the victory. Barcelona won, and it can be said that Real Madrid were the better side over the two matches but when all was said and done there was only one winner. The pressure worked to an extent, but it forced Barcelona to rely upon individual performances to get the job done.

Now, some would mention that as a positive factor [for Real] of the pressure, but let’s be honest, it won Barcelona the game did it not? In Lionel Messi they have the best player in the world, and one hell of a player to become reliant upon. Not only that, but what does it matter if Barcelona rely upon individuals for two matches of the season when the team is paramount in the other 36?

The onus appears to be on Barcelona, but has Jose Mourinho already made a mistake, even before the kick-off? His squad to face AFC Ajax included Mesut Ozil and Kaka, as well as Xabi Alonso, but it did not include Sami Khedira or Lassana Diarra. In my mind, this hints at one thing and one thing only: the Trivote. 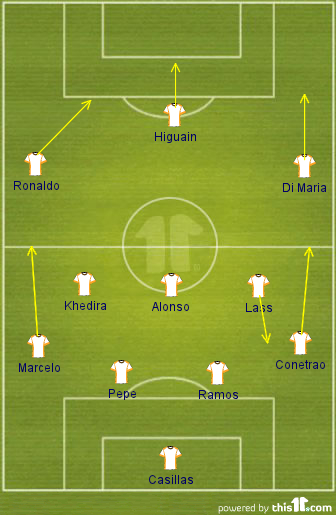 Jose Mourinho has earned his reputation as "The Special One" through making the hard decisions, and winning at all costs. Again referring back to that theme of pressure, he does not bow down to media expectations, nor the calls from fans to play in a particular fashion, he merely continues on as he wishes and how the team will perform best. After the Supercopa, many Madrid fans will feel as though it is time to go for the jugular. In fact, our interview with Graham Hunter told us that the respected journalist feels the very same way.

I can see why, after all, Madrid are on an extra-ordinary run of form and they aren’t just beating teams, but destroying them. Some compare it to the Barcelona of 2008/09, but a Trivote would signify that Mourinho is not yet sure of victory against this Barcelona side. Never mind if he is right to think this way, but I have an incline for why...

Quite simply, Mourinho is a very astute man. He sent his team out in the Supercopa with an exact plan that was followed to the letter (for the most part at least). As mentioned earlier, the "full-court" pressure was vital to that although at the end of the day, Jose realises that it did not get the job done. Now, he appears to be a logical thinker, and he will have realised that the Barcelona XI for the Supercopa included Seydou Keita, Thiago Alcantara, Adriano and Javier Mascherano. With the greatest of respect to each of those four men, they are not first-choice.

At the weekend, one would assume that Barcelona will line-up with both Carles Puyol and Gerard Pique in defense, Sergio Busquets in midfield and crucially, Xavi alongside him. If this full-court press ultimately failed to deliver the result required when Barcelona were missing four of their best passers, when would it work? I defy any team to try and pressurise Xavi into a mistake, it just does not happen.

This is not me being a biased Barcelona fan, he just does not falter under pressure. Much the same can be said of Sergio Busquets as a midfield anchor, or Pique as the ball-playing centre-back. A full-court press could work, but Mourinho prefers to have guarantees, and the Trivote will allow for some leeway. It is a clear nod to the sheer quality of the Barcelona midfield and in my opinion; it is Mourinho placing his faith in the abilities of Sami Khedira and the two full-backs, whoever they may be.

Real will operate on the counter attack, this much is for certain, and should the Trivote make its appearance, I struggled to see how the fluidity of those counter attacks will not be affected. Usually in a 4-2-3-1, the counter-attacking side can have the attacking midfield player drop deep to receive a pass from the two holding midfielders before continuing on as per normal. There will be no Ozil or Kaka to drop deep with a Trivote, but it does allow the full-backs to push forward.

Both Marcelo and Fabio Coentrao are full-backs that naturally love to attack. Marcelo in particular is a real menace in attack, but prone to fundamental errors when playing called upon defensively. With this Trivote in place Mourinho can release Marcelo and Conetrao from their defensive shackles, ready to cause havoc. Alonso can use them to start the counter attacks, thus exploiting the gaps left by Dani Alves and Eric Abidal. 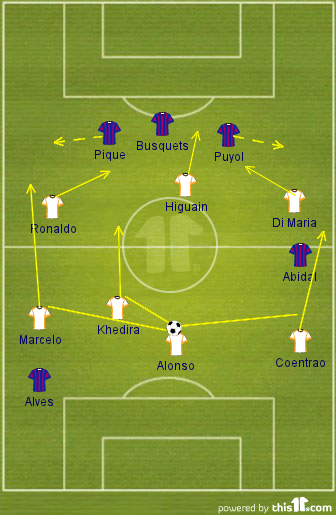 Forgive the rather amateur diagram, but it illustrates my point well enough. Imagine that Dani Alves has joined the attack, but then Barcelona lose out and the ball is with Xabi Alonso. In this situation, I believe he would have three options for the counter-attack. He could pass to Marcelo on the left, who would continue down the line. Assuming Barcelona are still tracking back, he would be surging down our right-hand side which would force a central defender (Pique) to shift across to cover. This would leave a gap for Ronaldo to exploit, and in turn that would leave a gap for Higuain to exploit. Thanks to the counter-attack, Real could have a numerical advantage in terms of attackers vs defenders and that would undoubtedly cause problems.

All down to the Trivote and its emphasis on attacking full-backs. The Trivote clogs the midfield, makes it harder for Barcelona to create clear-cut chances, especially if they operate without any wingers. It will allow Barcelona more possession but it ensures Mourinho can combine his two favoured strategies when facing Barca: "parking the bus" and pressurising from the front.

Combining the two just adds to the pressure on Barcelona and I can see why Mourinho and many Madridistas are confident of a long awaited victory. Pressure can make your opponents falter, but with this Barcelona team in particular, it may just force them to raise their game to a whole new level...

Tomorrow I will be looking at Barcelona’s likely line-up, and how to accommodate Cesc Fabregas.

For more on El Clasico, check out the SBNation coverage of Real Madrid vs Barcelona