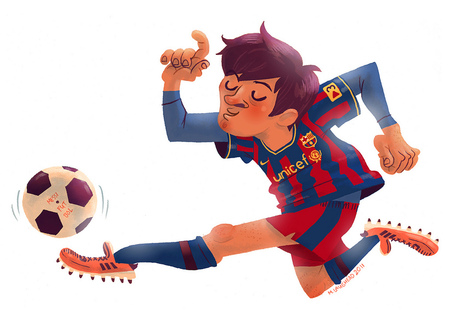 It’s match-day 33 and "only" 18 points left to play for, meaning if the Blaugrana can string a series of four consecutive victories FC Barcelona will be La Liga champions for a third time in a row. Meanwhile eternal rivals, and newly crowned Copa del Rey champions, Real Madrid, will once more travel to the Mestalla to face Valencia CF.

Though Los Che currently enjoy a fine spell of form, one cannot discount the Merengues, especially after their Copa heroics. With their title-hopes all but buried, Real Madrid could afford to rest several key-players such as Cristiano Ronaldo or Mesut Özil. But after defeating FC Barcelona confidence is sky-high in Madrid. Therefore it is not unlikely that Real Madrid will push FC Barcelona all the way to the end of this campaign.

It will be interesting to find out how the Blaugrana will respond to their first lost final under Pep Guardiola. The looming Champions League semi-final encounter, against Real Madrid, on Wednesday evening makes this match-day even more fascinating. Anything less than a convincing performance could deal a psychological blow to FC Barcelona.

While Pep Guardiola has announced changes to the squad for tonight’s game it seems like David Villa is not going to be one of the casualties. Needless to say, this is more than just puzzling since El Guaje has been FC Barcelona’s worst performer for the better part of two months.

Although I reject Alexandr Hleb’s suspicions of Pep Guardiola’s blatant favoritism of Spanish players, it’s hard to not suspect a certain degree of preference towards El Guaje. In regards to Alexandr Hleb’s short-lived Barca career, it’s safe to say that he was just abysmal in every game he featured in. After all, this is FC Barcelona where one isn’t granted an infinite amount of opportunities. Which brings me back to my original issue, why is David Villa still in the starting XI?

This is not a suggestion that David Villa is not a player of the highest pedigree or not Barca material, but at the moment he just doesn’t look like much value. Perhaps Spain’s all-time records scorer is in need of a rest.

At any rate and with all due respect, CA Osasuna isn’t exactly top-class opposition and it would provide an opportunity to give fringe players such as Seydou Keita, Thiago Alcantara or Ibrahim Afellay to prove their value. After all, if they can’t even grab a start against the likes of CA Osasuna it is out of question that these players will ever feature in a Clasico.

Nevertheless, we will be available on the Blaugranes chat during the Valencia CF vs. Real Madrid match.

For more coverage of the FC Barcelona vs. CA Osasuna game check out:

The Blaugranes Preview Part I and Part II by Arron Duckling

Special thanks to Barca Blaugranes member Mike Laughead for letting us use his wonderful artwork of Lionel Messi. Check out his website www.mikelaughead.com and/or his flickr account.

We are more than happy to feature artwork of our community members and look forward to do so in the future.