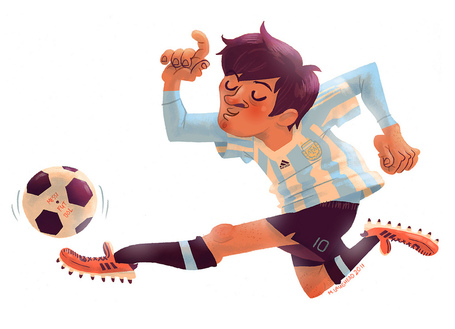 Tonight’s display against CA Osasuna was anything but a vintage performance from FC Barcelona. Even though the visitors from Pamplona lurk somewhere just above the relegation zone, chances were few and far in between. Some might argue that the majority of FC Barcelona’s regular starting XI didn’t participate in the game against Osasuna but then again, Real Madrid's second string smashed Valencia CF 3-6, at the Mestalla no less.

To be honest, if someone is to blame for FC Barcelona’s underwhelming display against CA Osasuna, it’s Pep Guardiola. Players such as Thiago, Afellay or Jeffren never, if ever, had a prolonged run in the starting XI. Tonight’s game marks the first time new signee Ibrahim Afellay played a whole match for FC Barcelona, now think about that!

At any rate, for some reason David Villa tends to score after I have written a "David Villa goal-drought" article. Yeah, I take credit for his newfound confidence ;)

Either way, for once, Pep’s stubbornness paid off.

While I do question the logic of benching Xavi, Iniesta & Lionel Messi just to introduce them in the second half, his seemingly endless dependence in the latter bore fruits. For those who didn’t watch the match, neither Xavi nor Andres Iniesta made that much of a difference. Quite frankly, FC Barcelona created just as little as before.

Nevertheless, Lionel Messi’s introduction turned the game in FC Barcelona’s favor as it was La Pulga who scored the all-important second goal that calmed some nerves, mine included.

It’s Lionel Messi’s 31st goal in La Liga and his 50th overall, in all competitions. While the 40-goals mark has been bettered a couple of times over the last few years (Thierry Henry did it with Arsenal, Ruud van Nistelrooy with Manchester United, while Cristiano Ronaldo did it twice, with Manchester United and Real Madrid), scoring 50 goals in a single campaign elevates Lionel Messi onto a new level.

Taking into the consideration that not even such prolific marksmen such as Ruud Van Nistelrooy or Andriy Shevchenko accomplished this feat speaks volumes of La Pulga’s abilities, and of course his extraordinary supporting cast.

The fact that Lionel Messi is just 23 is kind of scary. Normally footballers peak around the age of 25, 26 – 29 or even 30, but he is scoring in excess of 30 goals for a third year in a row. With the exception of the 2007/2008 campaign, Lionel Messi has always bettered his previous season's tally.

In comparison, it took CR7 five seasons to crack the 40-goal mark and he just repeated this feat in the current campaign. Of course, there will always be those who argue that the EPL is both, the hardest and best league in the world. Sue me because I’m not buying it.

If that’s really the case, how come EPL sides aren’t constantly winning the Champions League or the Euro League for that matter?

Personally, I think the two leagues are as equally challenging. While I do concede a certain duopoly in Spain, it must be said that Spanish sides tend to do equally as good, if not even better than their English counterparts in Europe. Especially in the light of underfunding due to individually negotiated TV-rights in Spain.

With at least seven more games to be played, I wouldn’t put it past Lionel Messi to break the 60-goals barrier.

In order to break into FC Barcelona’s all-time top 5 goal-scorer list, La Pulga "just" needs a further 35 goals. While it would be unrealistic to assume Messi could replace Paulino Alcantara and his 357 goals for the Catalan side, it’s not out of the question that he equalizes or even betters FC Barcelona no. 3 goal-scorer, Cesar Rodriguez and his 294 goals in all-competitions.

For now his 50th goal records reads a little like this:

9 goals in the UEFA Champions League

7 goals in the Copa del Rey

3 goals in the Spanish Super Cup

Perhaps it’s a little daring, but I believe Lionel Messi is the shoe-in favorite for a third consecutive Ballon d’or award.

Once again, special thanks to Barca Blaugranes member Mike Laughead for letting us use his wonderful artwork of Lionel Messi. Check out his website www.mikelaughead.com and/or his flickr account.

We are more than happy to feature artwork of our community members and look forward to repeat this experience in the future.