As I promised myself, yesterday, with my beloved Luis Enrique jersey, I went to "Les Corts", the neighborhood where Camp Nou is located, to take a look at the parade and see what was going on around the stadium. The parade was set to begin at 7.30 pm, Barcelona time. Given the time I didn't expect a huge turnout, after all, at that time many offices, and all shops, are still open in Barcelona. Needless to say, my assumption couldn't have been more wrong.

I approached Camp Nou at 7.10pm and there were already bunches of people skipping the parade to enter the stadium, where the team would arrive around 9pm to salute the fans and give a few speeches. The crowd was composed mostly of young people, teenagers as well as kids accompanied by their parents. Overall, as I said, I was very impressed by the turnout. Evidently not everybody felt so lukewarm about winning "La Liga" as I did. There was a great atmosphere and you could feel everybody was happy and excited.

I tried to cover the event as well as I could. Unfortunately, my friend who's a good photographer coulnd't make it so forgive me if the pics aren't of great quality. Let's just say I've always been better with paper and pen than with a camera in my hands. Also, I tried to live-tweet the event. Considering it was the first time I did something like this, I think the results were pretty good, but I'll let you judge.

After the jump, I'll tell you about the parade and you will also see a few pictures and videos. If you want to check out my tweets from yesterday, just visit my twitter feed. To see all the pictures I took yesterday, visit BarcaBlaugranes' official Facebook page, there's an album there.

As I said, I arrived in Les Corts around 7. I had some time before the beginning of the parade so I thought I'd take a look at what was going on around the Camp Nou. I knew FC Barcelona had a few stuff organized to entertain the fans who came to the stadium early. The activities were especially made for kids, there were elastic beds, stands where you could get your face painted red and blue and big mascots of Messi and Puyol. 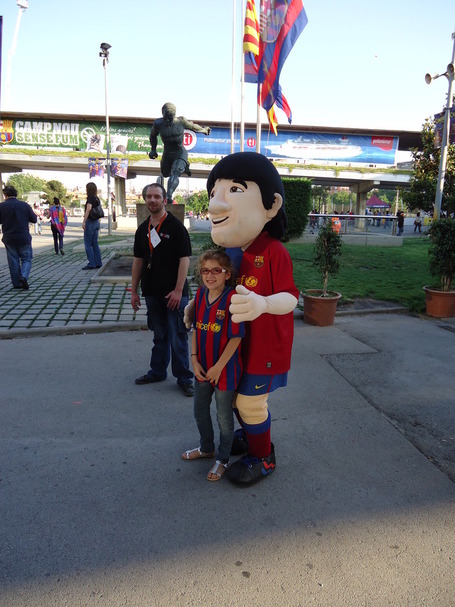 After spending a few minutes around the entrances of the Camp Nou I decided it was time to go and see the parade. Too bad it was too late and they already left the stadium. The chase was on.

I started walking quickly against the stream of people headed to the stadium in the hope of catching FC Barcelona's bus. I'll be homest, it wasn't easy. First of all, because I suck at running and I'm as fit as Shaquille O'Neal circa 2011. Secondly, I had to weave through clusters of crazy kids and their worried parents. And also, I had to stop to take a picture of these guys: 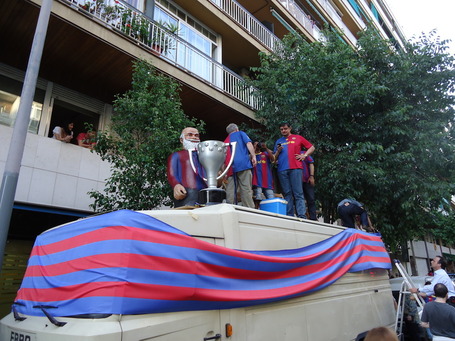 At that point I was getting real close and it was getting harder to move fast due to the flocks of people and the annoying policemen. I finally reached the bus after chasing it for at least 15 minutes. At that point I took my camera and decided it would be better to record a video instead of taking pictures. The bus was moving pretty fast so taking pictures was not a wise idea. Here's the first video I recorded:

You might not notice it, but I could tell the majority of FC Barcelona players were already drunk. Piqué was the most active, jumping and singing along, unsuccessfully trying to convince his teammates to do the same. Messi looked like he was totally stoned, he hardly celebrated. I had to stop recording when the bus took a turn and entered a super-crowded street. I got stuck there and I thought it might be a good idea to take a secondary street to avoid the fans. As expected, it was a good idea. The street was practically empty and I could run a little bit to overcome the bus and reach a point where I could film another video. This time, you should be able to see the players more clearly.

At that point I had to bail. I hope you guys enjoyed the videos, hopefully they can give you all an idea of how the parade was. Remember to check out BarcaBlaugranes official Facebook page for the rest of the pictures. If everything goes well, and I'm crossing my fingers as well as knocking on wood right now, I'll be able to cover another parade in a couple of weeks.