Barcelona close the season on a high note as the final game of La Liga 2010-11 ends in a 3-1 victory away at Malaga CF. 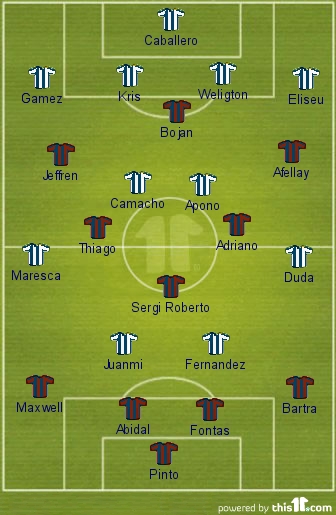 Barcelona fielded a squad of reserve and substitute players that really struggled throughout the first half to impose Barcelona's tiki-taka style against a more experienced Malaga side. Particularly of note in this first half was Barcelona's inability to connect clean passes from defense to the midfield as defensive passes were repeatedly intercepted deep within Barcelona territory.

The defensive frailties were exposed on 31 minutes as Duda made a deep run for a ball from Enzo Maresca into the Barcelona area and as he dragged Andreu Fontas with him to the by-line, expertly cut it back for Sebastian Fernandez at the edge of the box. Bartra who was covering Fernandez, completely miss-stepped his mark which allowed Fernandez a clear shot on goal. Fernandez fired low and direct, but as Jose Pinto went to ground, the ball ricocheted off his leg and into the roof of the net. 1-0 and Malaga were deservedly ahead after such terrible defensive errors however, the celebration would prove premature.

The half continued with very little industry from the Barcelona midfield albeit a few signs of magic here and there. Pinto made two saves from Weligton's header on 33 and Juanmi's shot on 42, to keep Barcelona in the match. It would come down to a play by Bojan to put Barcelona back in the match and send them into the locker room with a respectable 1-1 draw. Bojan received the ball inside the area and as he turned to shake off his markers, Eliseu made contact with Bojan that sent him to ground. Referee Clos Gomez deemed it sufficient contact and pointed to the spot on minute 43.

Bojan was the man to seek redemption for Barcelona and he made no mistake sending Wilfredo Cabellero to his right while he shot to the left corner and scored the goal that would put Barcelona back in the game. Half-time and the teams went into the locker rooms leveled.

The half-time talk from Guardiola must have been an inspiration since Barcelona came out with a faster tempo and Jeffren shot into the side netting with 40 seconds on the clock. Adriano was subed for Alves on 59 minutes and Alves added more movement and attack to Barcelona's style, immediately pinning Malaga's right midfield to a more defensive role. On 66 minutes Ibrahim Afellay had a glorious 1-on-1 with Caballero after a Krkic pass split Malaga's defense but he shot right at the keeper who was able to smother and collect his effort.

Pep made his last two changes to solidify both his defense and attack substituting Mascherano for Jeffren on 68 minutes and Pedro for Abidal on 72 minutes. Afellay would have a chance to redeem himself after receiving a Sergi Roberto pass on 76 minutes and he made no mistake this time. Ibrahim skipped past three men and on the left edge of the area, let go a powerful left footed shot that made its way past two defenders and  Cabellero, into the bottom right corner. 2-1 Barcelona.

Afellay's strike seemed to take the wind out of Malaga's lungs and put the game into Barcelona's hands as after his strike Malaga seemed to resign themselves to their fate. It was to be a night in which a young team had made many mistake, but a night on which those at fault would have a chance for redemption.

The next chance fell to non-other than Marc Bartra. Barcelona won a corner on 85 minutes which Dani Alves centered to the penalty spot. Bartra was there waiting and rose to the occasion sending in a beautiful and well placed header into the top right corner leaving Cabellero ball watching as it went in, 3-1 to Barcelona. With that goal it was game over for Malaga. The remaining five minutes and one of additional time wore themselves out and in this manner Barcelona achieved victory and finish the season with a total of 96 points. With the season over all that remains now is the Champions League Final at Wembley on the 28th, good luck and Visca Barca! Thanks for a great La Liga season.