It's been almost two full days since our beloved FC Barcelona won its fourth Champions League (FOURTH! Can you believe it?). But it's not too late to continue celebrating this amazing success. That's why I'm sharing with you a few videos and pictures from a night we'll all never forget. The quality of the videos and the pics might not be perfect but consider the following: 1)I'm not a photographer nor a cameraman, 2)I used my cellphone or my small digital camera, not exactly pro gear and 3)I might have or might have not been (it's not been confirmed nor I'm allowed to do so) drunk when I was filming or shooting. So, please, forgive me. Without further ado, after the jump, behold!

This is right before the start of the game. The Bar where I was watching the game (you know the story), led by the guys in the table in front of me, started chanting the hymn of the team, just to try to pump everybody up. And boy did it work.

This is a few seconds before the end of the final. As you can see, the people at the bar were just as thrilled as the guys on Barça's bench. If only the bar did provide us with free champagne we would have popped it right away.

This video was shot a few minutes after Barça hoisted the cup. Plaça Catalunya was already packed and it was really hard to get this close to Canaletes. One of my friends was brave enough to defy the masses and reach the fountain where he wet his hair, a tradition he has kept for every title we've celebrated in the past few years. Also, near the end of the clip, you should be able to hear the ever-present chant "Por qué, por qué, por qué?" (Why, why, why?), a clear shot at our friend Mou. 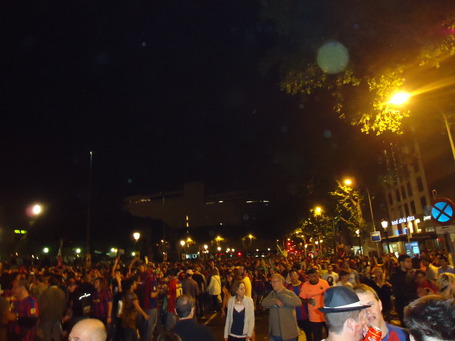 This picture can give you an idea of just how many people gathered in Plaça Catalunya. Once you got to the square it was really hard to move through the crowd. I took you several minutes just to move a few metres.

Another look at mostly and justifiedly drunk people celebrating the Champions League. 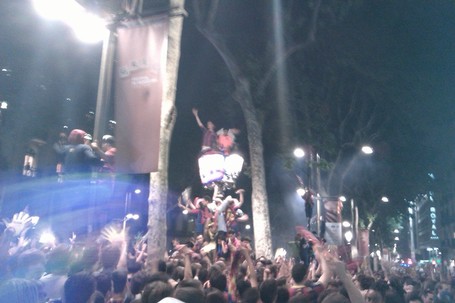 This is the closest I could get to the fountain, which was already, uhm, conquered, by a bunch of crazy Barça fans.

Again, people celebrating around Canaletes. Here you can also see some of the guys who (probably) got arrested later in the night, setting fire to the first trash bin. Stay classy guys! 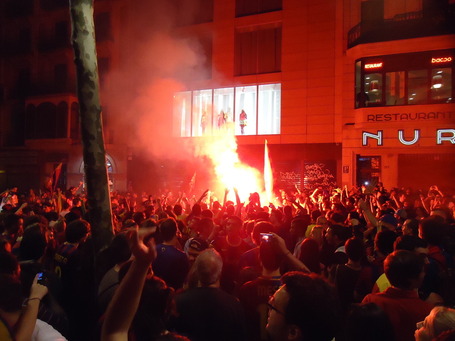 Doesn't look like the fire bothers people too much...Guess such a great joy overwhelms any other emotion. Or, perhaps, those people are just plain crazy. 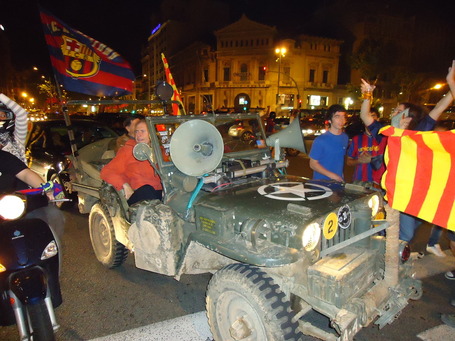 Speaking of crazy guys, these are really up there with the craziest you could see in Barcelona on Saturday night. Check out this military-style vehicle. Those huge loudspeakers were blaring Barça-related music such as Cold'lay's Viva la Vida (which, as you might remember, was Guardiola's chosen theme song for the six-titles season). Needless to say, these guys spent like 5 minutes stuck in front of a traffic light due to all the people who wanted to snap a picture of their staggering vehicle. I tried to follow their example and put my car loudspeakers at the maximum volume playing "We're the Champions" by Queen. How did it go? Well, let's just say I didn't attract the same attention as these guys. 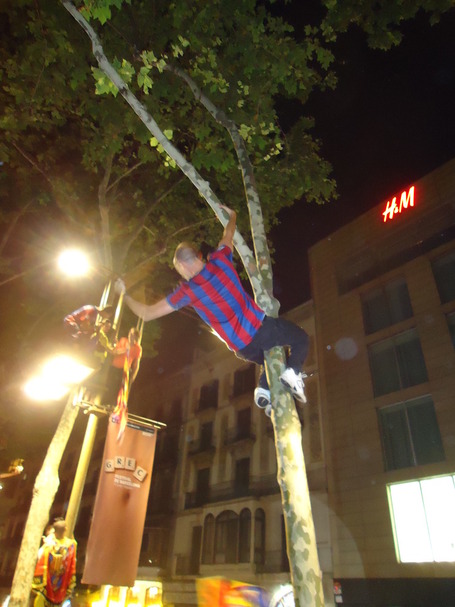 And you thought Messi was the best athlete in a blaugrana jersey... 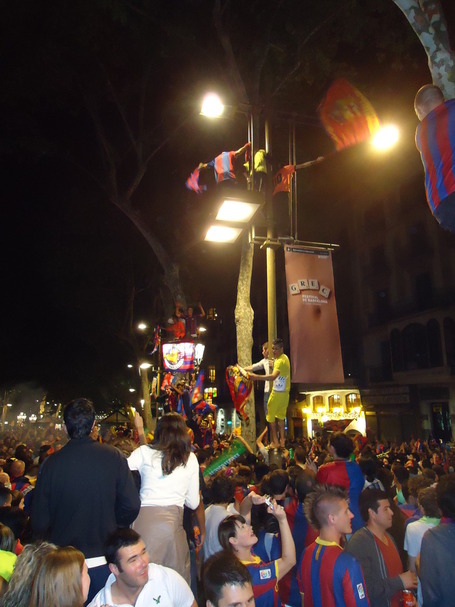 A final look at Canaletes. What a great night it was for every Barça fan around the world. Visca Barça!