FC Barcelona and "Tapping Up"

Share All sharing options for: FC Barcelona and "Tapping Up"

Editor's note: The views in this editorial are Sabrina's views only and do not reflect the view of Barca Blaugranes.

Hello everyone. I’m back (albeit late sorry Boss). I come bearing commentary on a subject that has brought on a lot of controversy, especially amongst the two sets of fans with which I am most closely associated. If you haven’t already guessed (Hint The Title) I want to address the whole "Tapping Up" issue and the allegations and finger-pointing that has been leveled against FC Barcelona regarding "Tapping Up."

Let’s first define this term just so that everyone is clear. From the ever helpful and reliable source that is Wikipedia, tapping up is defined as "an attempt to persuade a player contracted to one team to transfer to another team, without the knowledge or permission of the player's current team." From this point on any reference I make to the insidious act will be using the above definition.

Tapping up has been a part of the sport since the very first players’ transfers. We all know that every club is involved in some form of tapping up be it subtle and mild or blatant and serious. Let’s say a mild tapping up might be, someone associated with one club saying that another clubs player is "the kind of player" that would fit in well at their club. While a serious case of tapping up is more like launching (or feeding into however you want to see it) a media campaign to create the type of atmosphere in the other club’s camp that would lead the player to force a move. Feel free to disagree with the above statements; we can hash it out in the comments if you’d like.

Agents most definitely have their hands in the tapping up problem. We all know that agents love transfers, and they work, with or without their clients’ clubs permission to see if they can get one. There’s little anyone can do to control that. It would be naïve to believe that in the big money industry that is football agent-ry that the agent always works in the best interest of the client and his client’s career. If an agent can work a deal so that his client can get higher wages or a big move more often than not he’ll push for the big money deal, even if it sends the player to the bench of another team or in the process alienates the player from his fans. Agents, if they are any good at their job, always have their feelers out there for potential interest.

Arsenal FC manager, Arsene Wenger, has called for a review of the tapping up rules. I don’t anticipate that actually happening, even if it did, it’s not likely to make a dent in the problem as it is just too commonplace to stop it. Although no official complaint has been filed against FC Barcelona for tapping up, it has been a topic of discussion, particularly in the case of Cesc Fabregas. The focus will be "tapping up" on Cesc because of the abundance of material there.

In recent weeks, I’ve heard the back and forth between Xavi and Wenger. Xavi’s comments about Cesc left Wenger and Gooners upset. I believe, reasonably so. Just so everyone is clear on which comment caused such a reaction, Xavi said, "I spoke to Cesc in Ibiza and he said he was suffering, because he really wants to come. It’s what he most wants, he’s done everything he can to come and wants Arsenal to let him go"

Xavi claiming that Cesc is suffering at Arsenal is obviously not going to sit well with the Arsenal manager. That comment takes it a little further than commenting on how a good a player is, or saying that he‘d be a good fit at your club. Wenger found Xavi’s comment disrespectful and told the Gaurdian, "What is important is that Cesc Fabregas is contracted to Arsenal Football Club. That is a fact. Arsenal want to keep him." No one wants to hear that their captain is suffering because he wants to leave.

Maybe Wenger was offended by the implication that Arsenal is a place of suffering and that Fabregas is being forced to stay. Though Wenger and the Arsenal faithful may take exception to it, Xavi’s comment can’t be described as tapping up. It’s not meant to persuade Cesc to leave Arsenal, although he may have wanted to give reason for Arsenal to let him go for cheaper than Arsenal would like.

For someone who does not want to get into a war of words, Xavi sure has a lot to say. It wouldn’t take you very long to find actual examples of tapping up: according to Sport he said, "I hope Fabregas comes. Everything will be better and he will be at the best club in the world." Comments like these have been floating around for a while now and are definitely tapping up.

And that’s not all people. You can google nearly every Barca players name + Cesc and find similar comments.

They even tap up pictures of Cesc! 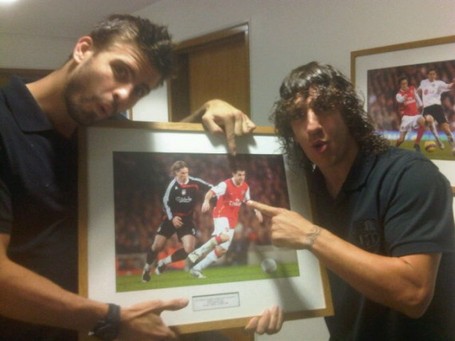 Cesc Fabregas is not the only player whose name plays on the lips of the guys at FC Barcelona. Before we even knew if whether we were really after Rossi or Sanchez, there were plenty of words going around about how great either of them would be in the side. The difference between other tap ups and the ones on Cesc is that the talk about Cesc appears to have no end. As the Rossi signing began to appear unlikely the talk about him from Barca personnel died away, but last summer when Arsenal were unequivocal in their refusal to sell Cesc the tapping up seemed to be at its peak! It’s the extent of the tapping up and how long it has gone on with Cesc that has attracted all of the negative attention. And for a player that Barca doesn’t even need! Why go through it all?

It feels as if this has been going on for years. Never in the history of the sport, has someone been so thoroughly tapped up(please correct me if I’m wrong). Yet it hasn’t done a whole lot to help Barca’s cause. I like Barca, and am well aware that other clubs and players are and have been guilty of tapping up, but right now I plead over the internet that the tapping up of Cesc Fabregas ends. It could go a long way in ending or reducing the suffering of many, including Cesc Fabregas. Just putting it out there.