Third in my list of "grand plans" for El Clasico is something that would include a huge change of style from the Blaugrana, but most notably the formation.

The formation that Barcelona play is only 4-3-3 by name, with many permutations depending on different scenarios. The most commonly known is that Sergio Busquets, despite lining up as a holding midfielder, drops into the centre of defense when the Blaugrana are in possession. This allows both fullbacks to maraud down the line, supporting the attack.

This conversion to a three-man defense is seamless, and gives me an idea:

A permanent switch to that three-man defense. 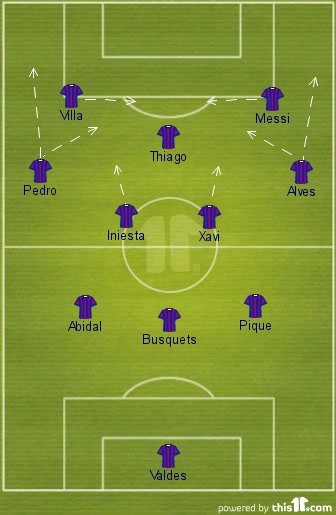 This formation allows for positional flexibility, as any transition to the normal 4-3-3 can be undertaken quickly. Alves would drop back, and the each of the three centre-halves would shift to the left. Xavi would then assume the role of a deep-lying playmaker (as I discussed yesterday), with Iniesta and Thiago completing the three-man midfield.

The qualms with my plan yesterday was the lack of steel at the back, and the threat of the counter-attack from Real Madrid. Therefore, Pique remains in defense, and the back-line itself should stay deep, giving Real space, but ultimately, limiting them to long-range shots.

This would leave a lot of space in between the defense and midfield, but I feel that Xavi would drop deep to receive the ball – as he so often does – meaning a greater control over not only possession, but also the pace of the game.

While a simple ball over the top is unlikely to work versus Madrid, that video is the perfect example of Xavi dropping deep and picking out the pass.

Currently, Barcelona attack with six players, (Xavi, Iniesta, Messi, Pedro, Villa and one full-back, depending on the side), but this proved ineffective against Madrid’s defense. It would be interesting to see how they coped when faced with seven attacking players.

With three players involved in controlling possession and two players on each wing, there are options aplenty for the man on the ball.

However, the most important thing is that players make runs from deep. These runs will be hard to pick up, and allow the trio of Iniesta, Xavi and Thiago to try their long shots (hint: click on their names for a video).

Dunno about you, but that seems like a good plan to me!