A familiar foe is an understatement. Barcelona could hardly kick their competitive season off with an opponent they are any more accustomed to; with this being the fifth time the two giants of the Spanish game have locked horns since the middle of April. The Super Cup is generally a pretty mild mannered curtain raiser, but with the famous rivalry at fever pitch and these sides meeting at this stage for the first time since 1997, this season's dual legged affair will almost certainly be far from a glorified friendly. Real will be hoping to maintain their perfect record in this competition against the Catalans, having won all 4 meetings between the two, and will be hoping to deal an early blow in what seems set to be another season spent slugging it out toe to toe with their clasico rivals.

In comparison to Barca's disappointing defeats at the hands of Chivas Guadalajara and Manchester United, Madrid have had a storming preseason. Los Blancos won all 7 of their games, averaging 4 goals per outing. The undoubted star was Karim Benzema, who impressively netted on 8 occasions. Much more onus is placed on preseason games in Spain than you would find elsewhere in Europe, with newspapers sometimes compiling results to declare who is the 'champion' of the Summer. In reality, most fans realise these friendlies carry little bearing onto a club's season but a manager as well voiced in mind games and sports psychology as Jose Mourinho will understand the advantage in terms of mentality that a solid foundation to a new campaign can bring. No icing on the cake that is this perfect start would be sweeter for him and his players than the opportunity to lift a trophy on front of their greatest enemy.

Like Barcelona, Real have injury concerns coming into these two clashes. New signing Nuri Sahin brings with him bags of potential, but also the concern of recurring knee problems. Having recovered from the right knee injury he suffered with Dortmund last season, Sahin's left knee is now giving him trouble, with a grade 1 sprain. This is very concerning for Madrid, as at the moment their highly touted Turk has not played a competitive game in over four months, and he is expected to remain on the sidelines at least until the start of the season. Given the problems Mourinho's side suffered at the heart of midfield without Xabi Alonso for periods of last season, the Portuguse coach will hope to have Sahin at his disposal as soon as possible.

Fellow new arrival Hamit Altintop will also miss out with a niggling back problem. Surgery was successful last month, but Real suffered criticism in the Spanish media for signing a player (even on a free) suffering from a quite serious injury, especially one who, like Altintop, has been very injury prone in the past. Real hope to have him back by October.

The versatile Esteban Granero suffered from muscle bruising in China and completes the trio of Blancos missing out. His recovery time should be much shorter than his midfield partners and he may well be fit to contest the second leg.

The real boost for Madrid is Sergio Ramos, who had been feared to possibly miss both legs of the tie, passing a late fitness test. In his pre-match press conference, Mourinho confirmed Ramos will be fit for selection.

Tactically, Mourinho is regarded among the best in the world, but apart from winning the Copa Del Rey, he has yet to gain the edge over Guardiola and his midfield maestros since he came to the Bernabeu.

In the shape of Coentrao, he has a versatile new toy to play with. Although a natural left back, the Portuguese is never going to displace the ever present Marcelo. As a result, he is far more likely to be utilised further up the pitch as a winger. Interestingly, the ex-Benfica man has also featured as a holding midfielder during preseason.

This is a role previously unfamiliar to him, but his work rate has made the transition quite seamless and he would prove a disruptive force to Barcelona's tiki-taka rhythm. Unlike a Khedira, Coentrao has blistering pace which would allow him to link up excellently with the likes of Ronaldo, Ozil and Di Maria ahead of him in this role.

In the first leg of last season's Champions League encounter, for around an hour until his sending off, Pepe pretty much wrote the text book on how to stop Lionel Messi. As soon as the Argentine talisman crossed in the Madrid side of the centre circle, Pepe was on him with the type of tenacity that earned Edgar Davids his pitbull moniker. La Pulga could barely find an answer to him until he was sent off for a challenge on Dani Alves. As long as he can maintain his discipline, it would make sense for the centre half to once again be deployed between the back four and midfield to hassle Messi.

Thanks to his excellent preseason, Karim Benzema should command the role of the lone striker and will hope to use these clasicos as a springboard to a successful year, although with Higuain around, his name on the team sheet is far from set in stone.

With so many possible options, Mourinho's intentions are tough to guess, but I'll make a stab at a 4-2-3-1 shape with the ball (right badly drawn diagram) and a more rigid 4-3-3 without it (the left one); with Pepe being kept at centre half, possibly to be used as a trump card once the business end of the season comes around and the difference between winning the league or not could be quelling Messi's influence. 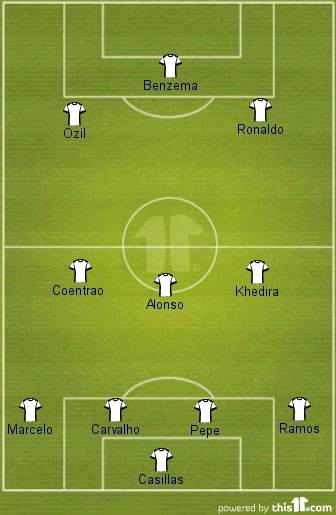 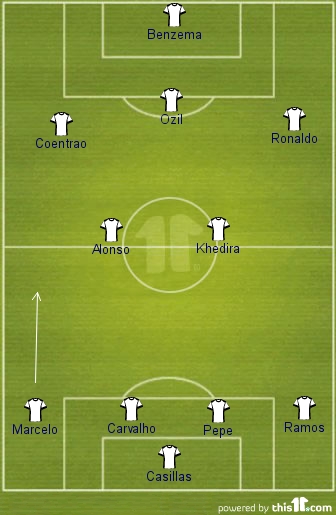 On the whole, Madrid are coming into this game well prepared, with a lot of options in terms of tactics and team selection; and will certainly be looking to state their intentions for the season from the very start. Barcelona are going to have to be at the top of their game, even at this embryonic stage of the season, if they are going to go into Wednesday evening's second leg at the Camp Nou holding any sort of advantage.