With the first leg of the Spanish Super Cup finishing 2-2 between FC Barcelona and Real Madrid, it is clear that all is not well in Cataluña. The Madridista camp are claiming superiority over the Blaugrana, and while it was evident in the match, form is temporary.

However, Barcelona cannot afford to write off this Supercopa, especially when they are the ones who hold the advantage, albeit on away goals, despite the supposed dominance of Real Madrid. A loss in any competition cannot be accepted, and Pep Guardiola needs to address the number of problems that arose from Sunday’s Clasico encounter.

To do this, I propose this line-up: 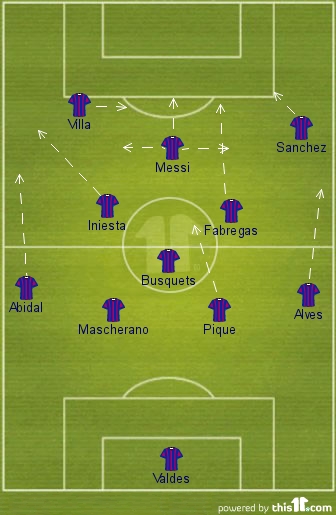 The standard Barcelona formation, with a number of special runs added in

This all seems well and good, but how will this counter the threats that Real Madrid posed?

Problem One: The pace of the Real Madrid attack

Given the absence of captain, Carles Puyol, I believe Javier Mascherano is the best candidate for the second centre-back slot, alongside Gerard Pique. Eric Abidal was adequate for the first leg, but on more than one occasion and most notably the opening goal, he could not deal with Karim Benzema.

Former teammates at Olympique Lyonnais, Abidal and Benzema also play together for the French national team; meaning this advantage that Benzema had was not down to his unpredictability, as Abidal will know his moves from training, but a sheer inability to defend direct pace and dribbling.

With Cristiano Ronaldo also cutting in from the side, you need two centre-backs who read the game well, utilise excellent positioning, and are not afraid of a physical battle. Gerard Pique is all of those things, and his reading of the game is world-class, hence him nickname "Piquenbauer". His strength is not to be under-estimated, with the spell under Sir Alex Ferguson at Manchester United serving to enhance the physical side of Pique’s game, and compliment his La Masia up-bringing.

Gerard Pique will be positioned on the right-side of central defense, and therefore will be responsible for one man, his former teammate, Cristiano Ronaldo.

Now on to Javier Mascherano. One of the best midfield destroyers in World Football, El Jefecito has been used at centre-back on a number of occasions by Pep Guardiola. Mascherano’s tenacity is well-documented, his penchant for sliding tackles duly noted, and he has an intrinsic ability to be in the right place at the right time.

In Sunday’s match, Mascherano made several blocks, and a number of key tackles. While not a natural centre-back, he fills in admirably, and there was one lunging block on a Ronaldo shot that was Puyol-esque.

If he is on the left-hand side of central defense, he can aid Abidal in stopping Karim Benzema, perhaps proving to be the answer to the much-maligned defensive crisis at FC Barcelona. Now that Fabregas has signed, chances may be few and far between for Javier Mascherano, unless Guardiola makes this change in position a permanent one.

The line-up that started for Real Madrid on Sunday and is likely to start on Wednesday is the very same XI that was on the receiving end of the Manita performance back in November. The formation was the same as well, but the style of play was different. Pardon the basketball reference, but Mourinho implemented the football equivalent of a full-court press, and to great effect.

The attackers, whom we have already established have great pace are pressing the Barcelona defense, and in turn, are stopping the Blaugrana from playing their game. Guardiola has set the team up to build from the back, and Mourinho’s plan disrupts that. There are two solutions, but here is the one I favour.

Playing with a high line.

It leaves Barcelona prone to passes over the top, but with Mascherano’s pace, and Pique’s positioning, the threat will be contained on most occasions. The higher line allows for quicker passing, and more options for the man on the ball, meaning that Real Madrid will have to press with more players, two instead of three and so forth. That opens up more options if the tempo is high, and more options will lead to more chances, and inevitably, more goals.

With Pique in defense, the likelihood of getting the first pass right increases and with a trio of Sergio Busquets, Cesc Fabregas and Andres Iniesta, the midfield are adept at choosing the right pass, and creating chances.

The pressure will be negated, and Barcelona will create chances.

It was clear for all to see that Barcelona were not suitably prepared. The pre-season tour of the USA was great for making money, and expanding the profile of the company, but as pre-season’s go, it was a shambles. It was too hot to train, the team were lacking key players, and even the results went against FC Barcelona.

The only thing it did was leave us two memorable quotes from the normally quiet Pep Guardiola. The first was him venting his frustration with the schedule:

"Once upon a time we used to do pre-season, now we do World Tours."

It was true, Lionel Messi even vomited on the pitch, during the game on Sunday, due to fatigue. While the extra rest was necessary, it has created problems in the short term, and Guardiola needs to address that.

This means taking advantage of the surroundings, and utilising the extra width on offer at the Camp Nou. On the formation, I added in a number of extra runs, which allow Barcelona to use the full width of the pitch, and as we eluded to earlier, Madrid will be pressing Barcelona at every opportunity.

If Barcelona pass it from side to side, Madrid will press, and eventually, they will get tired. It will take a while, and playing this way will be risky. After all, if one player gets his pass wrong, and Real intercept, the defense could be vulnerable to a counter attack. No risk, no reward is the saying, and the Blaugrana have to live that motto if they are to "level the playing field".

Despite all these problems, there are a lot of positives for Barcelona. Real Madrid’s defense remains suspect, with Lionel Messi being fouled at every opportunity, just to stop him from getting a shot on goal. David Villa only had one move (cutting inside the defender) and Sergio Ramos still couldn’t handle him. Marcelo remains a liability, with Alexis Sanchez going past the Brazilian on a number of occasions, not to mention his questionable decision making, as Pedro was unlucky not to get a penalty for his rash challenge.

It could be claimed that the referee was afraid in the first leg, as Khedira escaped scot-free for scraping Abidal’s skull, and Pepe was not even cautioned for his body check on Dani Alves. While there was the blatant trip by Valdes on Ronaldo, Real Madrid were lucky to finish with 11 men on the field.

Perhaps the partisan crowd at the Camp Nou will influence a few decisions, and the referee will make the correct call. Either way, I am supremely confident for Barcelona’s chances, and with morale on a high after the signing of Cesc Fabregas, tomorrow night could well be the next trophy in the cabinet for Guardiola and co.