Things generally went to plan over the Summer break for Villarreal CF, with victories coming against Aberdeen, Lazio, Elche and Everton. Their summer was finished off with a two-legged Champions League qualifying playoff against Odense. The first leg, in Denmark, did not go well; with new signing Cristián Zapata making a criminal mistake in his own box to put the goal at the mercy of Andreasen. The midfielder made no mistake and sealed a 1-0 upset victory for the Scandanavians and their rapturous support. Thankfully, for both the good of Spanish football and their own bank balance, the Castellon side spared their own blushes by winning 3-0 in the return leg at El Madrigal. As a result, Barcelona will face a side not at their peak level of sharpness, but still a dangerous foe coming off of an inspirational victory; and a team which will be looking for early reassurance that the promised land of the top two is not completely out of reach.

In contrast to their blaugrana opponents who face an injury crisis, Villarreal are in good shape. A few players, including Nilmar and Carlos Marchena, are carrying minor knocks but it is highly likely they will feature to some extent in the game. However, Spanish international wing-back Ángel López remains missing due to a cruciate knee injury that has kept him out since January. The lack of absentees will prove music to the ears of Villarreal fans that, were it not for a number of injury grievances (especially at the back), might have seen their team progress even further in the Europa League and surge to third place last season.

Tactically, El Submarino Amarillo are a side that has the potential to mix things up. Last season, they generally lined up (but rarely remained) in a 4-2-3-1 or a 4-4-2 formation. The shape they broke into on the whistle is one inspired by the preferences of former coach Manuel Pelligrini, which some have described as a throwback to the Brazilian 4-2-2-2s of the past. Bruno Soriano's hard working shifts in the engine room and the playmaking of Cani, Borja Valero and Santi Cazorla provided the supply for one of La Liga's most potent strike forces to produce; and Giuseppi Rossi and Nilmar did so with aplomb, finishing the year with a remarkable 50 goals between them.

Their attractive attacking football, at the best of times, combines the traits of Real Madrid's blistering counter attacks and Barcelona's passing brilliance, but Cazorla's loss to Malaga's millions will be felt strongly, with the diminutive winger amassing 10 league assists and 5 goals last campaign. The signing of Javier Camuñas from Osasuna, though, could prove an inspired one, as the Madrid cantera product's versatility (he can slot in on either wing and as a support striker in addition to his favoured attacking midfield role) is something highly valued by manager Juan Carlos Garrido and should fit him seamlessly into Garrido's fluid system.

In addition to their Samba inspired 4-2-3-1, Garrido also experimented with three at the back last year and followed that trend with a peculiar 3-4-3 lineup against Odense, including the Barca-esque move of playing defensive midfielder Soriano in centre back. The side ended up in a relatively narrow shape with Borja Valero afforded a lot of space all over the midfield to pull the strings and left back Oriol was relied upon to provide width for the side; while Camuñas and Cani regularly swapped the wings they came inside from.

Due to the relative lack of width, attacking creativity was stifled in a boring first half, and Garrido rang changes at half time, after which Villarreal's familiar attacking rhythm was rediscovered and the 3 goals came without too much trouble.

I don't think the Madrigal side could get away with such a slow and laboured style of play against Barcelona's relentless pressing, so Garrido could opt for his more familiar attacking shape, something like the following with my predicted XI: 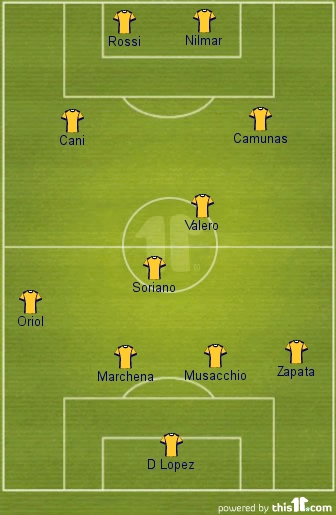 Borja Valero vs. Sergio Busquets - Whether Busquets will again feature at centre half or remain in his familiar role as a disruptive and hard running deep midfielder is unclear, but if I was Guardiola I would look upon the La Masíá product as the ideal figure to stem the influence of the brilliant Valero.

Giving Valero space to operate can be a criminal error, due to his potent ability dribbling the ball to get defenses onto the back foot and capability to pick out a defense splitting pass. Busquets should be tasked with closing down Valero relentlessly and not providing him with any breathing space or the chance to settle into the game.

Martin Montoya vs Cani/Camuñas - Villarreal will be more than relieved at not having to face the storming overlaps of Daniel Alves, and his normal replacement, compatriot Adriano, is out through injury.As Arron has addressed in his preview below this article, it is unclear as to who Barca will play at right back.

Ideally, Martin Montoya of the B side will play. Montoya is more than capable, having played regularly for Spain's national sides up to his current U21 level. Montoya has also just been called up to Vicente Del Bosque's senior setup. There is some question as to whether Montoya is eligible having featured for the B team already this weekend, but I believe players are allowed to be fielded twice in a weekend but not in a day; which would mean Pep has the luxury of playing an actual right back rather than another midfielder out of position.

However, the task facing him is far from an easy one to face in just his second start for the club. Cani and Camuñas will regularly interchange positions in the same way Cazorla was always a nightmare for opposition defenses to track; and Garrido will always look to provide room in the channels for his creative players to operate within and use to take advantage of the great movement of the strikers on front of them. This pairing, no matter how wide they play, will be looking to make use of it. Montoya will need to be at the top of his game to deal with whichever man he is faced with, and will need to show composure and exude the confidence of a full back who has played 200 league games rather than 2 to ensure Cani cannot get into his stride with the ball and whip in a few crosses early; or he could be in for a long and difficult evening.

Rossi and Nilmar vs. Barca's CB pairing - Again, Barcelona's defensive injury crisis at the minute is such that it is unclear who will be featuring at the heart of the back four, but it will be probably be at least one of Mascherano/Busquets and possibly Fontas or Abidal as well. While playing those 2 defensive midfielders out of position has not really posed too many problems for Pep Guardiola in the past, the miscommunication between Mascherano and Valdes during the European Super Cup against Porto in midweek, which very nearly resulted in an embarrassing own goal, served as a reminder that it is not an ideal situation.

Any such individual errors will prove even more costly when the men looking to exploit them are blessed with Rossi's power and thunderous left foot, and Nilmar's pace and cool finish. The emergence of young Argentine Marco Ruben could provide another threat for Barca's makeshift back four to contend with. Positively for the Catalans, neither of the two prolific strikers really provide much of a threat in the air which is where two unnatural defenders might be best taken advantage of, and Guardiola is probably secretly thankful he is making contingency plans to face small, fast attackers such as those he himself prefers; rather than an aerial beast such as a Llorente or a Falcao.

At the end of the day, though, this area of the pitch is probably where the game will be decided. Villarreal's defenders are hardly world-beaters, but in terms of experience will far surpass what Barca field on Monday evening. Villarreal will look to set their forwards free early and often to immediately test their opposition and give Barca's inexperienced defense no time to settle.

It is hard to believe, even with Champions League involvement, that a strike pairing much better than Rossi and Nilmar will travel to the Camp Nou this season and the Yellow Submarine will be hoping that their collective fire-power will help them launch an early torpedo at Barcelona in their quest to break from the shackles of the chasing pack.