This coming Saturday, Barcelona will renew their rivalry with Real Madrid, in the first of a two-legged Super Cup encounter. Pitting the League Champions against the Copa del Rey winners, it has long been thought of as a waste of time, or better yet, as a friendly, with a trophy thrown in. But when the tie is to be contested between Barcelona and Real Madrid, you know it will be hard-fought and intense in every sense of the word.

A Clasico is and has always been an event, no matter the occasion. A game between FC Barcelona and Real Madrid never has no meaning, nor can it ever be meaningless. After all, this is El Clasico. The greatest of all football games.

Under Pep Guardiola, the upper-hand has undoubtedly been with Barcelona, but recently, the results are improving for Real Madrid. Jose Mourinho’s side is no longer being beaten comprehensively, instead his men are itching closer to parity, drawing, and in one case, earning a victory. The Blaugrana need to freshen things up, as Madrid is getting closer and closer. In light of this, I have put on my thinking cap, and conjured up a few ideas that Guardiola could well use (if he reads our blog).

The first centres around current Ballon d’Or winner, Lionel Messi. Though not scoring, La Pulga was unstoppable in the, now legendary, 5-0 victory against Los Blancos in November 2010. The little man was on top of Mourinho’s priorities. How would he stop him in the UEFA Champions League semi-final? As it turned out, Mr. Mourinho pulled a rabbit out of the hat. He installed Pepe as destroyer-in-chief against the Catalans.

Pepe is simply magnificent at keeping La Pulga in check, and it was only after his dismissal that Messi scored his double.

Of course not, Pepe was a titan, stopping not only Messi, but also stifling both Xavi and Iniesta. One can assume Mourinho will continue to employ him as a midfield destroyer, and Guardiola needs to combat this, even if this means doing the unthinkable: 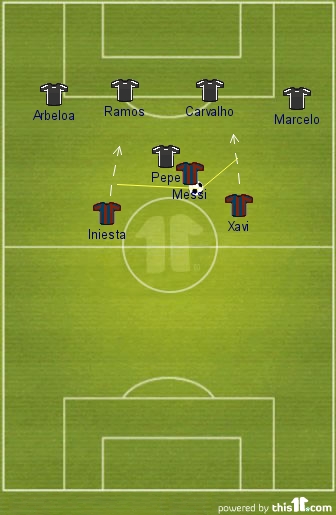 The diagram is rudimentary, but the principle is simple. Drop Messi deep, have him collect the ball and stay deep. From what I can gather, Pepe is told to keep tabs on Messi, and not allow him any time on the ball. Therefore, one can assume that whenever Messi gets on the ball, Pepe will be ready to close him down and tackle him.

Messi must bait Pepe, draw him in, and the play the ball to either side, allowing Xavi and Iniesta the space. Pepe will be "out of the game", and crucially Xavi or Iniesta will have space. 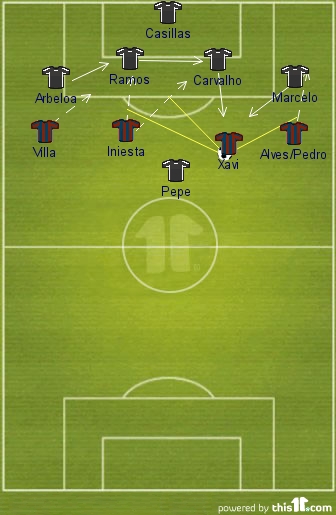 In this situation, Messi baited Pepe, and then played the ball right, to Xavi.

Mourinho’s game in the Champions League was to allow Barcelona space in their own half, but close them down the moment they entered the Madrid defensive third. This worked very well, especially whenever Pepe was involved. Now, if Barcelona can get past Pepe, they will have more space, and time on the ball.

However, in my diagram, I anticipate that whoever receives the ball in this situation (Xavi) will be closed down by either Carvalho or Marcelo. Ramos will move more central, and Arbeloa will follow suit. This creates space for the Barca players, and Xavi will be left with a couple of options.

Option 1: Play the ball out wide to Dani Alves/Pedro.

In this situation, Marcelo will have been the one closing Xavi down, leaving a space behind on the right-hand side. Xavi will need to pass the ball to Pedro/Alves, and the key is that they are running onto the ball. This will give them a huge advantage over the defender, and allow them to get into a position like Ibrahim Afellay did, and play in a cross. Whether or not they score is debatable, but a chance will be created.

Should there not be an option on the right, there will be Iniesta on the left. Should Ricardo Carvalho attempt to close the gap to Xavi, the best thing to do would be a through ball to Iniesta’s diagonal run. This puts him in a good position for a shot across goal, and up against Ramos, there is a slight chance of a foul, meaning a penalty.

Another possibility is for Iniesta to draw Ramos inside with a diagonal run, creating space for Villa to cut inside from the left, receive a pass from Xavi and get off a shot.

Of course, this is easy to write, but the execution must be flawless, and take place in the time it takes you to read this sentence. Though if any team can, it is Barcelona.

While I haven’t accounted for the other two midfielders, (according to Managing Madrid, likely to be Coentrao and Alonso), this would likely take place during a counter-attack, while they are tracking back, and Pepe remains in defensive mode.

If Messi plays as the pivot, and Guardiola can choose to sacrifice his goal-scoring threat to negate Pepe, the Blaugrana could well stand a better chance of winning the match.