Yesterday, I detailed the first of my tactics that could aid the Blaugrana in their quest to win the Supercopa, and as promised, I have plenty more. While yesterday’s plan was about Lionel Messi dropping deep, and FC Barcelona playing without a centre-forward, today’s idea could not be more contrasting.

Perhaps Pep Guardiola should play a centre-forward, an old-fashioned number 9.

Maybe the Santpedor-born manager should opt to play Gerard Pique.

Before you say that I have gone mad, and that Pique is guaranteed a starting place anyway, I have got to be clear:

Guardiola could move Pique forward, and have him play as a striker.

Now, this would leave a gap in defence, and yes, I have been highly critical of Guardiola’s decision to play Sergio Busquets in Carles Puyol’s place, but on this occasion, I will make an exception. The back four would contain Alves and Adriano on each flank, with Eric Abidal and Busquets in the middle. This would leave a gap in midfield, and one would assume that Javier Mascherano would be the obvious replacement.

Well, I have another idea. The problem against Real Madrid was not defending, but instead chance creation. Therefore, why not play an über-creative midfield consisting of Xavi, Thiago and Iniesta?

Xavi was hailed as a long-term successor to Guardiola, and Pep played in defensive midfield. In fact, I was having a discussion on Twitter with Sebastian, and Gene Um from The Busby Babe about Xavi, and how he would be perfect for a deep-lying role, much like the one that Andrea Pirlo played for AC Milan. It may be a gamble to try it out in the Supercopa, in El Clasico, but a change appears to be necessary. 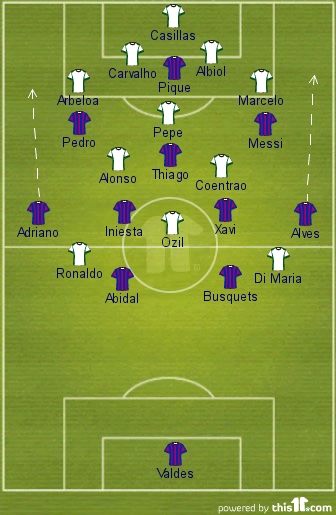 How each team could line up.

Key in this formation would be the two wide players, Pedro and Lionel Messi. They would have to play narrow, allowing space along each side, therefore allowing space for delivery. Thiago could play as a "false no.9" something Guardiola experimented with against Club America, and Xavi and Iniesta would operate just behind.

Such a system would have its flaws defensively, though I am a firm believer that Madrid will have >30% possession in each tie. Conceding the ball, they will sit back; absorb pressure, before looking to counter attack. This makes it vital that Abidal plays centre-half. King Eric is the only one who has the pace, and strength to deal with the direct threat posed by Cristiano Ronaldo, especially in the absence of Puyol.

With three attack-minded midfielders, two wingers adept at beating their man, two overlapping fullbacks capable of delivering crosses, and most importantly a target man who understands the Barca system, Real Madrid would need all hands on deck, limiting their effectiveness on the counter attack. 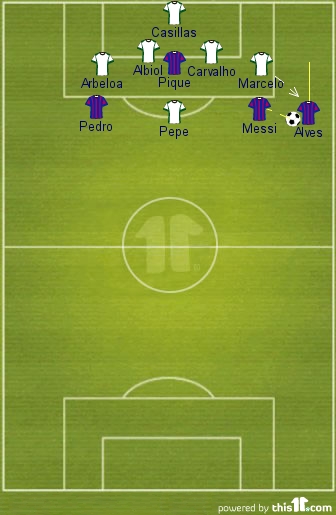 In this situation, Alves has a number of options.

Once again, please forgive the average diagram, but here is an overview of how this would work. The ball would be with one of the two full-backs, and in this case, I chose Alves. As with any system of play, it is important to keep your options open. The more options you have, the more unpredictable your play becomes, and in turn, the more difficult it is to defend. If Alves is driving down the line one of two things will happen.

Scenario 1: Marcelo will attempt to close him down

If you see a player running down the line with the ball, it’s likely your brain will tell you to close him down. Doing so will hurry him, and enhance the likelihood of a poor delivery, but in this case, Alves has some options.

When Marcelo closes him down, Messi will be momentarily open. At this point, Alves can play him a pass. Marcelo will effectively be "out of the game" and Messi will have some space. Chances are, Pepe will be in the process of closing him down, or the centre-back will be, but a moment of space is all Messi needs. As was his trademark in the 2008/09 season he will be cutting inside, ready to test the keeper.

If Messi is cutting inside, the attention of the defense will understandably be on La Pulga, and that could allow either Pedro or Pique to make a run and receive a pass.

Back to Alves, and if the pass to Messi is not open, he can still carry on with the run down the line. This would force Marcelo’s hand if you will, and Alves can attempt to evade any challenge, or he can try and deliver a cross. This cross would either be blocked – presumably for a corner – or will find its way into the box, possibly for Pique to capitalise upon. Either way, Madrid will be forced to defend a cross.

Scenario 2: Marcelo does not close him down

In this case, Alves has fewer options, and really, they are similar to before. If Marcelo is not closing him down, he can change the angle of his run, and go directly at Marcelo. The trickery of the Brazilian could force a bad challenge, (read: penalty), but at the very least, it will create a little space for Messi. La Pulga can either ghost his run to the wing overlapping Alves, or he can stay fairly central, and receive a pass there.

If Messi goes with the overlap he can attempt a cross, and if he stays in the same position he can do what I suggested above. Test the keeper, or play a pass.

Alternatively, Alves can carry on down the line, and without opposition, he can (hopefully) play in a better cross.

Amazing pass from Alves! (via DonBasarico)

While I used Alves and Messi as the example, this can be easily done by Adriano and Pedro on the other wing, and of course, Pique is the one they are aiming for on every delivery. Playing an old-fashioned number 9 is not the Barca way, but it would force the Madrid defense deep. If the defense are deep, Pepe will either have to drop deep, or there will be a lot of space between the midfield and the defense.

With Xavi, Iniesta and Thiago in addition to Pedro and Messi, that space would be exploited at every opportunity, and Barcelona would benefit.

Playing Pique in centre-forward may be unorthodox, but think of the reaction from Madrid to that teamsheet. They would assume that Pique would be in defense, and play as they would usually, but when the teams took the field, with Pique as a striker, Real would be forced to change things up. Mourinho thinks he knows what Barcelona are going to do, and is briefing his players accordingly.