FC Barcelona: Just why are they the best team in the World?

Share All sharing options for: FC Barcelona: Just why are they the best team in the World?

Just why are FC Barcelona the best team in the world? Why is it that teams simply cannot defeat the reigning European Champions? Even putting all 11 players behind the ball can fail to keep the Blaugrana at bay, with Lionel Messi and co. Putting even the most defense-minded sides to the sword. Of course there are reasons out there, tiki-taka being one of them, but is there a tactical reason for it?

There does appear to be one reason that no-one has picked up on, and could this be the reason why FC Barcelona are heralded as the best team of this generation, perhaps of all-time?

Next time you watch a football match (unless it features Barcelona), take a look at how each team attacks. I don’t mean watching how they pass, or the movement, but merely count the number of players in attack. At any given time, in a 4-4-2 formation, one may notice that most teams commit five bodies to attack.

This includes the two forwards, the two wingers, and a runner from midfield.

Bolton vs Wolverhampton 1-0 (via TheOwnhd)

In this video,  attacking, and end up with five players in the opponents box. Often there is a sixth player in and around the area, though his role is likely to be as support to the players ahead.

In a 4-2-3-1, it is likely to be five again (the lone striker, the three attacking players, and an overlapping fullback). However, depending on personnel, that figure could rise to six, with a runner from midfield.

Bosingwa Goal vs Norwich 27/8/11 (via KissMyAssalona)

This is the first goal from ’s last match, and from this point, it is obvious that the 4-2-3-1 system they have in place enables them to commit six players to attack at any given time. With Bosingwa’s goal, there are six players in attack, though it is obvious that he did not need them in support. However, the point remains: Chelsea attack with six players.

As do Manchester City, Arsenal, Manchester United, and Real Madrid, it appears that, the greater the ambition and desire for silveware, the more players are likely to be involved in attack.

So how do factor into this?

Well, here’s another of my rudimentary diagrams, this time displaying how Barca line up when in possession: 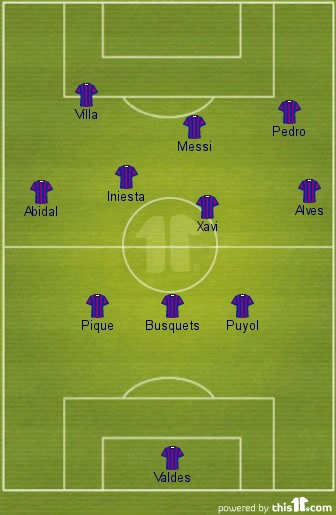 Sure, this is not precise, but the basic principle is there. Sergio Busquets drops back slightly, and forms a back three with Carles Puyol and Gerard Pique. This allows Dani Alves, and Eric Abidal to push up-field, and BOTH join the attack. This is absolutely paramount to Pep Guardiola’s system. The two full-backs push up, and the man in possession has more options.

Count the players forward. You have both full-backs, Xavi, Andres Iniesta, Lionel Messi, Pedro and David Villa. This is where the difference lies. FC Barcelona generally attack with seven players.

Each player is vital, and often, Sergio Busquets is slightly higher up the pitch, meaning that in extreme cases, Barcelona attack with seven, and have one player in support. While the tiki-taka and pressure are what the pundits pick up on, it is easy to underestimate the influence of sheer numbers. To counteract five attacking players, you have to commit all four defenders, and at least one midfielder to defence.

The formation of choice now is 4-2-3-1, as it enables quick changes in shape depending on the situation. It also allows you to commit six players to attack, though it also provides the perfect antidote to a six player attack. A manager will obviously keep his four defenders back, and the two players in holding midfield can switch to defensive duties.

But how would you set out to defend seven players and more importantly, what affect does it have on ones attack?

Well, many teams, in fact, almost all teams who have faced Pep Guardiola’s FC Barcelona choose to "park the bus". It was not as evident in the first year, but as time has progressed, it has become common practice, to the extent that even Real Madrid and Arsenal have "parked the bus" against the Blaugrana. Both of those sides are renowned for their attacking flair, but neither chose to directly attack the Blaugrana in the past campaign.

In this case, "parking the bus" can be defined as putting a vast majority of players behind the ball, or increasing the defensive responsibilities of everyone on the field. Though just how many players are left to defend?

I mean no offense to any of the clubs I am about to mention, but generally, the approach of a relegation-fodder side is different to the ambitions of Real Madrid. Those bottom feeders will put eight players on the field with the sole responsibility of defending. They will operate with a lone striker, and two wingers, who will each be in a support role, compared to their usual attacking role.

Examples of these teams include Racing Santander, Almeria etc. However, the lack of attacking numbers causes huge problems. Sure, that team will be harder to breakdown, but realistically, one could describe a tactic like this as a "facilitator". Basically, defending becomes their sole priority, meaning that FC Barcelona can focus solely on attack, and perhaps commit yet another player forward, making the defending team’s job much harder. Hence, the defending team will commit more players to defence, and the cycle continues.

This "park the bus" tactic is the reason FC Barcelona find it so easy to succeed, as in most cases, the quality shines through. However, the only reason it becomes the solitary option for the opposition is the tactical genius of Pep Guardiola. 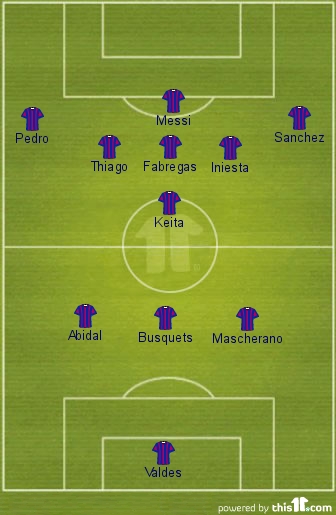 Comparing this picture with the first brings up some noticeable differences. Sure, my positioning may not be spot on, but the average positions are correct.

Lionel Messi was the false no.9, but with him were three players operating as trequartistas. This means four separate players with unbridled creative license, when most teams operate with a maximum of one. The possibilities were endless, the tactical flexibility unparalleled and most importantly, the opposition was overwhelmed.

This line-up was a mere extension; an evolution if you will, to the original. Football is evolving, and FC Barcelona is currently the best team in the world. Hopefully, I have shed some more light on why.

Though to finish, here's the response of Johan Cruyff when I asked whether this is the best FC Barcelona of all-time: