After the disappointing draws against Real Sociedad and AC Milan, FC Barcelona will be attempting to get back to winning ways in their match against Osasuna. Saturday’s match takes place at the Camp Nou, and while Osasuna have started well and can boast the same number of points as Barcelona, one would expect an easy win for the Blaugrana. But we will get to that later...

Recent matches have shown that not all is rosy in the Catalan capital...

Much has been made of the Barcelona defense, or lack thereof. Andreu Fontas is falling victim to hatred usually reserved for Real Madrid players, whereas Sergio Busquets is a world-class holding midfielder who doesn’t possess the necessary versatility to feature in the centre-back position.

As Jose mentioned in his latest article, the problem is the lack of depth:

Ever since Guardiola took over control of the Catalan outfit, one could see that Barcelona had a small squad. The squad had limited depth, so when no reinforcements for the defense were acquired, it further depleted the ranks. Barcelona simply had fewer men with which to cover for the extended absence of members of the squad. Indeed, Guardiola is a man that rarely changes his preferred starting XI, but this team heavily relies upon the condition that he has a full squad of players at his disposal. Thus a lack of preparation for an uncertain future only contributed to making Barcelona a squad that was more reliant on its very limited, but world class pool of talented defenders. Since these defenders where expected to do the work of a much larger squad of players, the extra exertion resulted in the inevitable, injuries.

Releasing Gabriel Milito was inevitable, his performances were costing the Blaugrana points whenever he stepped onto the pitch, but not buying cover could prove equally as disastrous as the ex-Real Zaragoza player. The acquisitions of Alexis Sanchez and Cesc Fabregas have been marvellous pices of business, and Sanchez in particular was necessary, considering the departures of Jeffren and Bojan, but Cesc was more of a luxury than necessity. However, the board duly obliged to meet Guardiola’s player requests.

Now, I understand the financial situation is delicate, but would an extra €1.5 million mattered at all? With that sum of money (€1.5 million), FC Barcelona could have resigned Alberto Botia, whose performances have earned him a call-up to the Spanish national team, the senior side no less. While Botia is not the best player in the world, only a fool would consider him to be a worse option (at centre-half) than Sergio Busquets or Andreu Fontas. The latter is about just as far removed from earning a call-up to the Spanish national team as humans are from colonizing Mars.

Though re-visiting hypothetical situations will not lead anywhere; Botia is not a FC Barcelona player, and they must plan accordingly. With Osasuna likely to follow the blueprint of AC Milan and every prior opponent of the Blaugrana, it is a time for Barcelona to overcome their demons.

Gabe addressed these just yesterday, and each of them are unequivocally frighteneing. Concentration is a huge problem, sheer physicality remains an obstacle in every match, and Lionel Messi has found himself a little isolated. Perhaps a rethink is needed, why doesn’t Guardiola switch back to the formation used against Villarreal? 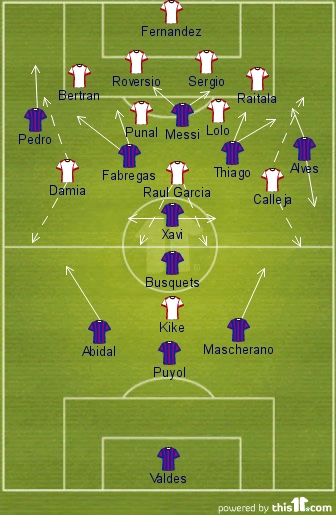 Apologies for how "busy" this diagram is, but bear with me, I will try to explain the reason behind each piece.

The main problem is the lack of depth defensively. Jose referenced it, heck, we all have, and there was no point in recent history when Barcelona were lacking in true defenders than the Villarreal game. Carles Puyol and Gerard Pique were injured, Dani Alves was suspended, and all looked lost.

Of course, it turned out that all was well, though Jose said that match garnered "false hope". While I agree in principle, the draws should have brought this team back down to earth. With Carles Puyol back to some form of fitness, there is no better time for him to start than Saturday. In the middle of the three defenders, he could act as a sweeper, which would compensate for his decreasing mobility, and his fitness. Alongside him: the two most athletic defensive players on the team, Eric Abidal and Javier Mascherano.

Each would provide pace to cover, and fitness levels to apply the pressure needed in such a daring formation. Ahead of Puyol would be Sergio Busquets in his usual holding role. Note to Guardiola: Busquets, not Seydou Keita.

While the Malian appears to be a physical presence much like Michael Essien, he is too attack minded to fill in at defensive midfield. Busquets provides technique, and allows Barcelona to recycle possession, an absolute must for this team. Pouncing on loose balls, Sergio can start the attacks as quickly as they end, and this is paramount to success.

Football is played on grass, but is won off the field. Whether it be through press conferences, reputation or relentless pressure, football is all in the mind. After the 5-0 thrashing Villarreal left-back Joan Oriol remarked that he "had never run so much". Expect he had, and in almost every other game of his professional career.

The pressure exacted upon the Villarreal backline took its toll mentally, and after this, it is only a matter of time before your mind convinces your body that it is tired. All in all, Sergio Busquets is absolutely vital.

Now onto the midfield!

AC Milan played a physical, defensive game and stymied the Barcelona attack. We've seen it many times in Champions League play: Barça's rival avoids engaging the Blaugrana in an open game, and instead packs the back section, clogs the middle of the pitch, and plays on the counterattack. Sometimes it works, sometimes it doesn't, but it's always a problem for Barcelona.

This was one of the demons that Gabe mentioned in his article. Emphasis is mine, and it brings me to my point: This is completely true; so why not fight fire with fire?

I propose an ultra-creative midfield where Xavi plays in his usual position of central midfield. Ahead of him, two attacking midfielders: Cesc Fabregas and Thiago Alcantara. To either side, Guardiola can send out the wingers: Pedro and Dani Alves. 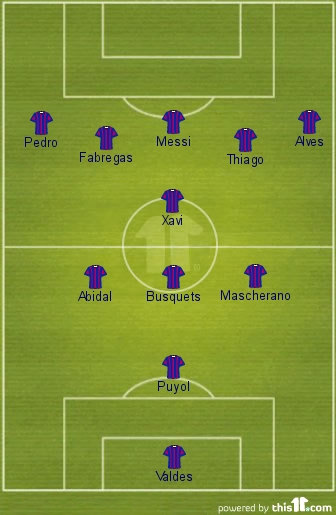 Guardiola could implement a variation on the famous 1-3-3-3 formation AFC Ajax used, thus compensating for the lack of defenders and strikers.

The stats from the Villarreal were scary. Possession stats up in the 70-80% bracket, and total passes getting close to the 1000 mark. The endless tiki-taka of passes, triangles, movement, creativity, through balls...goals.

Each one chipping away at the opposition, it was a display of attacking prowess, and when you keep the ball so efficiently, it does not matter who you have at the back; they are not likely to be tested. Alves and Pedro can provide width, or can cut inside, further clogging up the middle, fight fire with fire. If teams play narrow, inviting the crosses into the box it is clear that they do not want you to go down the middle.

Not to say they cannot defend when Barcelona play through the middle, but many teams use it to call Barca’s bluff. It looks difficult to attack as per usual, so Barcelona do not try, and attempt to go down the line. Why not blitz the middle and test it out?

Osasuna will play narrow, that much I can guarantee, though details remain sketchy. Watch out for Michael’s scout report likely to be published after this preview. In lieu of this, I came to the conclusion (read: guessed) that Osasuna will employ a four-man back line with two defensive midfielders. On each wing, there will be a winger who has played at full-back (former Barcelona player Damia, and ex-Villarreal man Calleja on the left).

Raul Garcia could be an option, as this line-up is devoid of creativity, though his passing ability may not get a chance to shine with Xavi, Cesc and Thiago on the same pitch.

Upfront there is (relatively-speaking) in-form Kike Sola, and he could cause problems, though the main threat will be on the counter attack, and at set pieces.

Lionel Messi would have options in attack, and Osasuna may not have any answers.

After the consecutive draws, there is no room for a slip up, especially with Madrid facing Levante. Expect a performance that reflects this, and a comprehensive Barcelona victory.