If you buy something from an SB Nation link, Vox Media may earn a commission. See our ethics statement.

This is part two of a series of three posts about my favorite player, Lionel Messi. Like Messi, I was diagnosed at a young age with growth hormone deficiency, and, like Lionel, I was cured of it--although, unfortunately, I was neither a gifted young footballer nor contacted by FC Barcelona. These posts will focus on three parts of Lionel's game: dribbling, passing/vision, and intangibles/movement.

Passing has always been an underrated part of Lionel Messi's game. Not that anybody had dared to argue that he wasn't a particularly capable passer of the football (as mostly every La Masia graduate is), but it wasn't until last year, where a deeper, "freer" role accelerated Messi's assist numbers, that anybody seemed to be really taking notice:

But truth is Messi has always been a kind of hybrid player, both an excellent finisher and distributor. Coaches for his national team have always tried to figure out how to utilize Lionel's talents. Why isolate him on the wing when he can influence so much more of the game? Why ask him to play centre-forward when he can play the enganche position, even better than the likes of Riquelme, Cambiasso, and Pastore? But I'm not here to talk about Messi's positioning. For now, I want to talk about how Messi passes, how he thinks on the ball, and what makes him an even better, more effective passer than even some of the midfield maestros on his own team.

There are basically two types of passes that Messi loves to play: a specific pass and a non-specific pass (I'll get to that explanation in a minute).

The first one (shown in the above video) can occur in two ways, either as Messi drops deep and frequently rightward from the centre-forward position or even when he is not withdrawn. The destination of Messi's pass here is to find a wide-playing forward, Villa or Pedro usually, who is playing just behind the full-back. Now, it's important that the recipient of Messi's pass is behind the defender for a few reasons: 1) The defender is unaware of the attacker's run and can't time his response to it. 2) The defender is drawn to Messi, which allows Messi to discern when to make the pass. 3) The defender is not "goal side" of the recipient as to be able to make an easier tackle. Now, here's how it works: 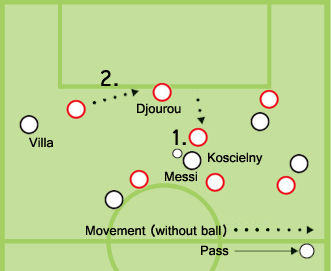 Using the Arsenal game as an example, we have Villa tucking behind Sagna (the right fullback) and Messi dropped off from his centre-forward position with the ball running at the goal. Arsenal's defense now has a decision to make: do one of their centre-backs come out and confront Messi like Mourinho ordered Carvalho in the Supercopa...or do they stay still and allow Messi to run at them full-steam? Logically, they chose to not take that risk; however, the knock-on effect is that the defense has to shift to compensate for the CB (in this scenario, it's Koscielny) approaching Messi. What Messi is looking for when this hapens is a very specific lane that suddenly opens up.

Now, remember that in this example suddently the defense is shifting to the left (Messi's right). And this can only favor one person--you got it: Villa. Magically, Villa can hang wide and await a diagonal ball between the centre-back and fullback because there is not only space there for the pass with one less defender but the defense is suddenly out of shape. The funny thing about this pass is that it's also the favorite pass of Xavi and Iniesta, and you used to see a lot more of it from those players when Messi was playing to the right. And that's the key difference, and advantage, insofar that Messi is playing the ball much closer to the intended target, while additionally he is drawing defenders and opening up spaces...while Xavi and Iniesta, with their deep-lying role and limited (at least in comparison to Messi) dribbling abilities, can't do as effectively.

So, yes, that is a specific pass that Messi has developed now that his role has become more central and thusly more focal in this phenomenal Barcelona side. But that's not the only type of pass Messi does...so what about all of those others?

I'm going to lump all of them into what I call "non-specific Messi passes." With the earlier pass/assist, it's something very specific to Messi's role on the team--how he vacates space in the center of the pitch, how he draws defenders in a particular area--and while there is slight variety in it (as many of you might have anticipated, Messi's assist in the Arsenal game was when Villa was behind a centre-back--but it's roughly still the same pass) one can basically list the permutations fairly quickly. On the other hand, Messi does a whole lot of passing in Barcelona's games that isn't so specific; in fact, frequently he drops into midfield to just simply pass or help out because Xavi/Iniesta/Busquets are having a hard time getting the ball forward. It's here, I think, where we realize just how talented Messi is as a team player, how he is not only capable of dribbling around the midfield in ways that Iniesta can't do but how he can just as well slot in and keep the ball "flowing" to the final third.

Imagine the difficulty for a defender: you not only have to get near Messi, but you have to understand that he can just as much pass around you to beat you as dribble around you. This is precisely why when a team bottles themselves up like Milan did this week, Messi will seemingly go full-throttle into the belly of the beast. Yes, he's looking for an opening to get to goal--one, must never forget that he is always looking to score--but he's also asking the defenders to lose their shape to possibly create a quick ball to a Barcelona player with a space now opened up. The brilliance of Messi is not simply that he can get into those micro-pockets that no other player on the planet can but that he can pass once he's there.

In conclusion, passing is as much to Messi's game as dribbling. The two, in fact, are rather reliant on each other; they bolster each other because superiority at one allows even more superiority at another. With Messi finishing last season second in Europe in assists, I don't think anybody can doubt La Pulga's remarkable talents as a world-class distributor.