This weekend past was a quiet one in La Liga. With the international break, most of Spain's biggest stars were busy engaging in handbags at the end of the national team's thrilling come from behind victory against an Alexis Sanchez led Chile. La Roja breaking their recent run of poor performances and the incredibly strange sight of Real Madrid players piling in to defend their Catalan comrades stole the headlines in Spain; allowing one story in particular to slip under the radar.

That was the news that Real Madrid's midfield wunderkind Nuri Sahin, who has yet to appear in a white shirt, had been ruled out for a further two months due to his new injury. Marca asked if he was following the footsteps of the likes of Arjen Robben as the latest 'glass' star to pass a troubled spell with more time in the treatment room than on the Bernabeu grass, and just glancing at the comments for that particular story, it seems Sahin is losing the faith of many fans before he has even had the opportunity to play on front of them.

He may not make it to the pitch for a few months yet, but when he does, I'm certain that Sahin will have a bigger impact than many might presume; and could be Jose Mourinho's secret weapon to deploy against what many would argue (myself included) is the best midfield group ever assembled, that of Los Blancos' great clasico rivals, FC Barcelona.

To discuss Sahin's impact, where he'll fit into the line-up of Barca's eternal rivals must firstly be addressed. Mourinho's favoured shape is a 4-2-3-1 but he has in the past used a 4-3-3 variant sparingly; especially against Barcelona to go toe to toe with the current La Liga and European champions. When he goes for two holding midfielders, the Portuguese normally prefers Sami Khedira and Xabi Alonso. In this formation Sahin would likely take Khedira's place as the less creative of the pairing - the Turk's defensive abilities would be on par with the German and being a more complete midfielder would give him the edge.

Lined up here, Sahin would be pitted directly against the advancing Iniesta, who would look to exploit his young opponent's inexperienced nature by drawing him towards him; away from his role as a defensive midfielder, only to make him look silly with a short lay off to the likes of Messi in the space left behind. As a result, I think it is unlikely for Mourinho to deploy his new acquisition in a more defensive role until he can learn the game a little more and cope with such talent coming at him from all directions.

It takes a very disciplined and smart player to even attempt to stem the influence of Barca's attacking midfielders and Messi dropping as a false 9, and while it is easily for him to go unnoticed in this role, Khedira is a very underrated cog in Madrid's machine. This is another reason Mou may be reluctant to use Sahin in his regular 4-2-3-1 lineup, as it would mean dropping a player whose absence may not be noted in the stands, but would strongly be felt on the pitch against such a formidable attack.

In his famous treble winning season of 2009/10 at Internazionale, Mourinho used a tactical ploy he has yet to pursue fully with Los Merengues - a rotation of two formations, depending on the situation his team was faced with. At home, and against the so called 'lesser' sides (of which there is a much higher number in Spain than in Italy), a variation of the 4-2-3-1 which has been his weapon of choice at the Bernabeu club was employed. However, away from home, and against bigger sides (most notably in that infamous 'sprinkler' Champions League semi in the Camp Nou), Mourinho used a 4-3-3 that we haven't yet seen Real attempt under his reign; one different to that which he has used previously with the intention of accommodating Pepe as a defensive midfielder. I believe that its absence will not last for much longer and this Inter-style tactic, along with Sahin's presence, could be his plan in finding an antidote for Barca's clasico dominance this season. 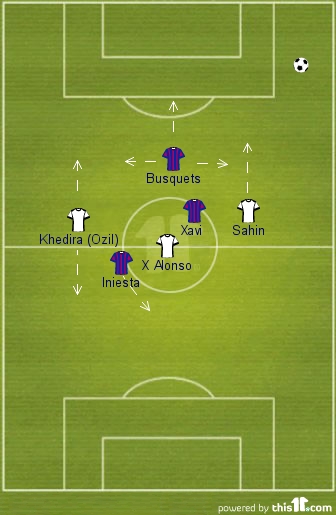 The 4-3-3 is more cautious and rigid, and certainly more defensive than what we've seen Los Blancos opt for so far under the former Chelsea boss; but it was rumoured in the Madrid press over the summer break that Mourinho feels it is superior to anything else he has at his disposal in terms of getting the best out of each individual. A similar prediction was made by Catalan media over the summer, regarding Pep Guardiola making a switch to the 3-4-3 he played in under Johann Cruyff, which proved to be true as early as the first league game of the season. This was thanks for the most part due to a defensive injury crisis, but nonetheless shows that even elite coaches with tried and test formations are far from immune to tactical tweaking.

Sahin would slot into a three man midfield with Xabi Alonso and either a central and out of position Mesut Özil (if Mourinho is feeling adventurous and doesn't want to bench a player of such pedigree); or a deeper Khedira. Mourinho's main attacking intention in clasicos last season was to exploit the space left by Barcelona's attacking fullbacks, and it worked, to an extent. With a 3 man midfield consisting of accurate passers of the ball, especially Sahin and his pinpoint left foot, widemen Ronaldo and Di Maria may benefit from a better quality of ball into the space they attack from. Sahin, in fact, led the Bundesliga by a great distance when it came to goalscoring opportunities created; so this is an area where the benefits of his presence should genuinely be felt.

Real Madrid also found their best result last season (their narrow Copa Del Rey victory after extra time) when they were at their most aggressive in terms of pressing Barca's midfield, offering them as little time on the ball as possible. Mourinho should look to enforce this type of pressing game heavily this campaign; as it allowed Madrid to force Xavi into one of the few weaker performances in the kind of glittering season which should make him an automatic Balon D'Or nominee (not that he'll ever actually win it or anything).

In this aspect of the game, Sahin is coming from a Dortmund academy and title-winning side famed for its preaching of a high tempo game featuring relentless pressing and the drive to win the ball back as far up the pitch as possible; the likes of which only Barcelona with Sergio Busquets at his marauding best can match up to. If Sahin can carry that with him to the Spanish league, Xavi could begin to start showing his age if he isn't given the time on the ball he needs to calmly pick opponents apart with his customary 100 passes per game.

On the whole, it might be a while before he is fit to take one on, but it is clear that Nuri Sahin is poised to play a key role in many clasicos to come. The games may always provide a spectacle, but the midfield battle has been a lopsided one in recent years. His addition could prove to be the catalyst for a Real resurgence in the biggest game of them all. Sahin brings a prodigious talent and, as soon as he's back to fitness, his impact will be felt not just on the pitch, but possibly on the scoreboard and the league table too. Xavi and Iniesta, consider yourselves forewarned.