Recent Form: Real Sociedad's new French manager Phillipe Montanier got his tenure off to the best possible start with a 2-1 win away to Sporting Gijon. Both goals came from the head of number nine Imanol Agirretxe, but de las Cuevas hit back quickly from the spot and the home side dominated proceedings thereafter. The Basque club will hope that their ability to withstand the barrage can carry over into their home opener against the Champions; and they'll be praying for a repeat of last April's corresponding fixture in which Barcelona lost 2-1 and missed out on equalling the 32 games unbeaten record held by the famous Real Sociedad of 1979-80.

The relative lack of activity was echoed on the other side of transfer proceedings, without a penny spent. Instead only two loan signings were made, but they were both equally shrewd. Arsenal forward Carlos Vela may be only 22 years old, but his 35 Mexican caps and 135 club appearances in England and Spain prove that sometimes in football, age is just a number. Vela will probably ultimately be deemed surplus to requirements at the Emirates, but that's not to say he isn't a very good acquisition for Montanier and should be relied upon to contribute at least 10 goals.

The other loan move was for Internazionale's African defensive midfielder McDonald Mariga. The Kenyan previously starred in Italy for Parma, and work permit problems meant he narrowly missed out on a deadline day deal to Manchester City in the winter window of 2010. The next day, he moved to Jose Mourinho's Inter on a loan deal which was soon made permanent; but understandably in a midfield featuring the likes of Stankovic, Motta, Sneijder and Cambiasso, has found himself frozen out of late. Again, he should play frequently and have a very positive impact on the team.

Team News: Summer signing Mariga missed the first game of the season through a knee injury but will probably make his début in San Sebastián on Saturday. Defensive midfielder Markel Bargera still has a foot problem which has carried over from pre-season, and if Gorka Elustondo's absence is also confirmed, a young player will be handed the unadmirable task of facing the world's best midfield.

Either U19 European Champion Rubén Pardo or Asier Illarramendi, who has enjoyed a run in the U21 selection recently in Thiago's absence, would take the place in the pivot position. Illarramendi would probably get the edge, as he was handed his chance and took it well in the first game of the season. Watching Spain U21s last week I knew very little about him, but he did his best Xavi impression and was impressive enough to have names like Manchester United and Real Madrid linked to him in recent days. However, potential will count for little when faced with the likes of Xavi, Iniesta, Fabregas and Busquets; and the Blaugrana men will likely be ruthless in their attempts to exploit the young midfielder's weaknesses.

Key man Antoine Griezmann didn't feature last week due to the manager's decision. Was it because he wasn't fresh enough due to his U20 World Cup involvement? Or was it an internal punishment for declaring a desire to join Atletico Madrid at the end of the transfer window? It is unclear at the minute whether he'll start or be benched; but he will most probably face a hostile reaction from his home crowd.

Joseba Llorente was deemed not 100% last week, but should make it; while preferred right back Carlos Martinez saw red last week for the offence that granted Gijon their penalty and thus misses out through suspension. 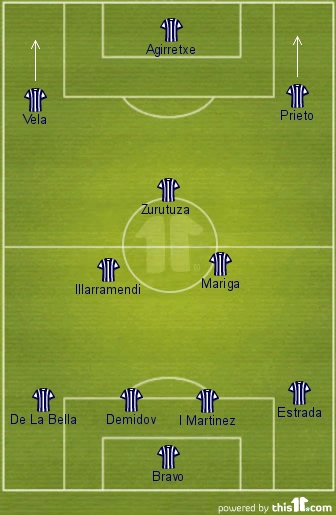 My predicted shape and XI

Tactics: New coach Phillippe Montanier brings with him a strong preference for the 4-3-3 shape and that's how he has lined his charges in the league opener and in all preseason friendlies. Key to the fortunes of the side this season will be the performances of swashbuckling widemen Xabi Prieto and Antoine Griezmann. Griezmann especially was touted as a potential big signing for many of Europe's top clubs, including Barca, but made the admirable decision to spurn their advances and stay with the club that had given him his chance and where he could be guaranteed first team football; but changed his mind with his recent come and get me plea.

Both would probably fit in either side of a front 3 rather than the more traditional wing positions they played under previous coach Martín Lasarte; and their profligacy could come further to the fore playing higher up the pitch. Prieto was unplayable at times last season, with a heroic tally of 7 goals and 13 assists; without which the blue and whites would surely have been relegated. Pacey 19 year old Griezmann netted 7 times and will be looking to build upon that with a breakout season. Any positive attacking play from the San Sebastian based club will almost certainly come through this pairing.

Without the ball, the wingers will withdraw a little and creative midfielder David Zurutuza will play in a less advanced position, meaning the tactic more resembles a 4-2-3-1 on the counter attack as Vela (maybe Griezmann) and Prieto look to pile forward.

Up front, looking to latch onto their supply, will be either Llorente or Agirretxe, both handfuls in the air and clinical finishers. Attack is, on the whole, not a big concern. The aforementioned midfield injuries certainly are, as is a defense that leaked a number of goals (66) only surpassed by Malaga and bottom Almeria last season.

With no additions and a starter suspended, Barcelona's attackers will be licking their lips at the prospect of facing such a weak back four. Real Sociedad will be encouraged by getting out of El Molinon a man down with 3 points still intact, while taking on a Barcelona side coming off the international break and possibly not at their peak level of freshness is also a plus; but it will take a performance every bit as dogged as that which got them a win against the Catalan giants last season if they are to take anything out of this match.