The first league Clásico is on the horizon and it’s shaping up to be a cracker.

Madrid go into the clash eight points behind league leaders Barcelona and it’s been a far from perfect start for Mourinho’s men.

A record of two losses, one draw and three wins means Real Madrid currently sit sixth in the Liga BBVA table. Coupled with arguments within the dressing room mean there are more than enough reasons for Cristiano Ronaldo to feel sad.

While Barça, although far from "perfect", remain the only side with a perfect win percentage in the league. Six games played, six games won with the most recent victory proving to be the game of the season so far.

A late David Villa goal ensured Tito’s Barça the three points against an excellent Sevilla side. Two great teams going head to head, winner takes all. An ideology that can be applied to the Clásico. If Barcelona win, Madrid will be eleven points adrift. A Real victory sees the gap cut to five.

Last season it was the reverse. Barcelona were trailing Madrid but by three points having played a game extra. Guardiola’s team then faced a poisonous atmosphere at the Santiago Bernabéu that only became worse after Karim Benzema scored the quickest goal in Clásico history.

But Barça dug deep and the possession philosophy prevailed. Summer signings Sanchez and Fábregas sandwiched Xavi on the goals list as Barcelona pulled level in the league.

Unfortunately we all know the story of the next league Clásico. 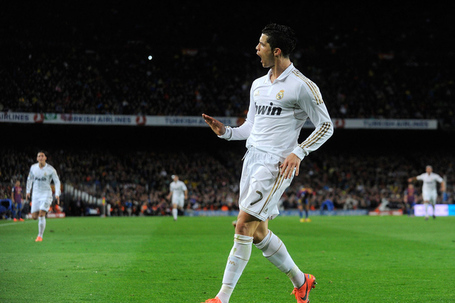 Real Madrid went on to win the title and Barcelona finished nine points behind Los Blancos. This year, it’s different. The ruthless Madrid side that crushed sides last season seems to have lost its killer edge.

Frustrated is the adjective that best describes Mourinho at the start of this season. Claims of having no team made it clear that his players were not producing the kind of performances that won them the title last season. A wave of complacency floated it and Mourinho struck quickly to kill it by identifying the main trouble-makers. 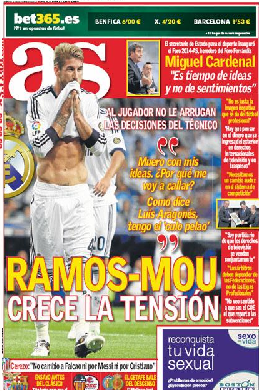 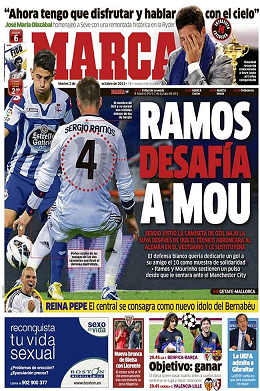 Ramos made a fuss, Ramos found himself on the bench. Özil claimed he was first choice, Özil got substituted at half time. Ronaldo said he was sad, Ronaldo carried on scoring. Well some things never change.

But the frustration was threatening to bubble over and destroy Madrid’s season before it had truly begun. Until a Champions League clash with Manchester City. Finally Madrid produced a satisfying performance and José released the bubbling tension. 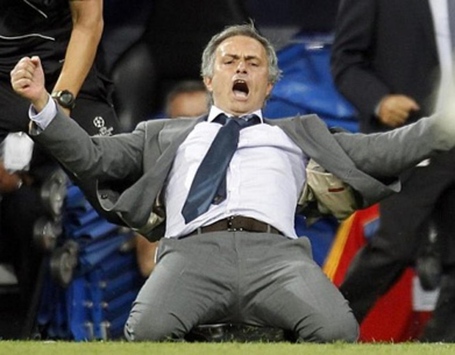 Since that win, Madrid seem to have turned the corner. Winning three games out of three and scoring eleven goals in the process. José’s team are beginning to get back to full form but is it enough to dampen Barça’s start to the season?

The Tito era has begun in a way that even Pep Guardiola couldn’t have imagined but this is the biggest test yet and Vilanova has to decide a few key factors before Sunday.

Cesc or Iniesta? An inform Cesc or a returning Iniesta is a tough choice for the Barça coach. Obviously Iniesta at his best is a better player than Cesc, even though Cesc has found his goal scoring touch again. Although a returning Iniesta who only made a substitute appearance in the midweek Champions League game against Benifca is unlikely to hit the ground running in the Clásico.

So the question may be, how do you fit both of them on the field? Fábregas out wide with Iniesta in the centre or may be the reverse? Who loses their spot to make way for the extra man, Pedro, Alexis, Villa, Tello?

This brings me onto the wings. Who is best suited for this game? Villa, Alexis, Tello or Pedro? Villa and Pedro both have the experience and the knowledge of how to win a Clásico. 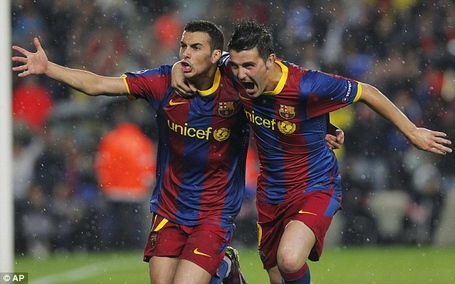 While Alexis and Tello provide pace to the game and are no strangers to Clásicos themselves. I would personally pick Villa and Pedro to create the deadly ‘MVP’ that worked for Barça for so many years.

You have also the defensive issues. Is it worth risking Gerard Piqué if it means replacing a far from perfect Alex Song? With Puyol out, it now seems most likely that it will be Piqué coupled with Mascherano in the heart of the Barcelona defence.

Madrid have also bolstered their midfield with players such as Essien and Modrić meaning Barcelona will have to work hard if they want to keep the ball in their danger zone of midfield. Vilanova, therefore, may be more tempted to play the physically stronger Song over Busquets. Although it seems unlikely after Song’s dreadful performance last week.

Second-guessing the line-ups of a Clásico is always going to be difficult but below I have included the teams that I think/hope will be selected on Sunday evening. 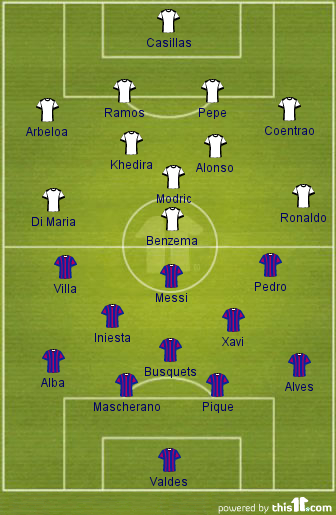 Whoever plays it is sure to be an exciting match between two great teams that could very well decide the destination of this year’s title.

For more Barcelona vs Real Madrid coverage, be sure to check out our Clasico Storystream