Not you again! Tomorrow’s match will be the fourth and final meeting between Osasuna and FC Barcelona this season, and with a bit of luck, it will complete a Blaugrana whitewash in the series. The first meeting between the two sides this season was the 8-0 victory at the Camp Nou, before Barca progressed 6-1 on aggregate in the Copa Del Rey not too long again. Coincedentally, next week’s match with Valencia will also be the fourth meeting between the sides this season. Well, I suppose if we have a million Clasicos, this is the opposite end of the spectrum.

Now, I mean no disrespect to Osasuna, but really, this match is pretty pointless. Barcelona need a miracle/Real Madrid implosion to win the title, and with the UEFA Champions League returning next week, this match is by far the least important of the week. The best result we could hope for this weekend is for Pep Guardiola to rest a few key players, and then whatever score we get tomorrow is improved upon on Tuesday. Of course, a win coupled with a Real Madrid loss would be great, but while most of Europe has frozen over, I think Hell has remained unscathed...

As I mentioned, the Champions Leagu returns next Tuesday, and Guardiola should – and in my opinion must – rotate his squad as fully as possible. Osasuna away is a tough match, but not even in the same ballpark as a trip to Leverkusen. The Champions League will be the defining factor in Barcelona’s season and possibly in Pep Guardiola’s young managerial career if he can claim back-to-back titles. This must be shown in the starting lineup.

Therefore, I would go a little unorthodox, with a version of Guardiola’s 3-4-3. 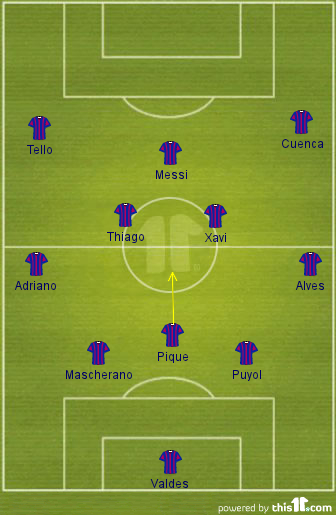 The formation above is really is open to interpretation. Is it a deep-set 3-4-3? Maybe a 5-2-3? Depending on the positioning of the wingers it could be a 5-4-1 or a layered 3-6-1. Maybe if Gerard Pique pushed forward it could merely be a bog-standard 4-3-3. Whatever you think I created, it could be an option for Pep.

Victor Valdes is a certain starter in goal, and ahead of that, there are few options in defense. The B team will need their players for a match with relegation-threatened Cartagena, and unless Pep raids Eusebio’s squad for defenders, he really has little choice. Dani Alves is the only right-back in the squad, although Carles Puyol has filled in admirably as of late. At centre-back, you have the aforementioned captain, Gerard Pique, Javier Mascherano and at a push: Eric Abidal. However, Abidal is one of only two left-backs in the squad along with Adriano.

So, with a view to resting Eric Abidal so he is at peak condition on Tuesday, I propose a three man backline composing of Gerard Pique, Javier Mascherano and Carles Puyol. The first two are young enough and fit enough to play twice in a week for most weeks, so both are likely to play 90 minutes, while I would start Carles Puyol with a view to substituting him off around the hour mark for Eric Abidal.

Then I would love to see Pep Guardiola experiment with a couple of wing-backs. Dani Alves is clearly playing as a wing-back in the majority of games anyway, but with less responsibility to defend and crucially space to run into not to mention a winger ahead of him to draw the attention of a defender, I believe Alves could truly flourish. Sure, he doesn’t do badly in the 4-3-3, but this could go some way into finding a place for him in the 3-4-3, and even finding a space for someone like Gareth Bale on the opposite side. If that’s what you would like to see anyway.

For now, it will be Adriano, who’s very similar to Alves, just a little worse/more well-rounded. The Brazilian likes to get forward as much as he can, and this way, there will be less defensive ramifications, and it will also provide Barcelona with the opportunity to either overload the middle or the wings in search of goals.

The midfield is looking a little short number and height-wise, but with Cesc Fabregas surely in line for a rest, I would opt for Thiago and Xavi together. Cesc has played pretty much every game in recent memory, and he hasn’t been at his best. Maybe I am wrong, he did score on Wednesday after all, but a little rest worked well for Xavi, so why not Cesc? Pique could push forward to act as a defensive midfielder much like he did at Real Zaragoza. Geri is a superb footballer, and think he could really shine in the 3-4-3 as a libero, or at least as an "attacking" defender if that makes sense.

Should Guardiola decide against my system (highly likely), a more plausible scenario would see Carles Puyol drop out in favour of Jonathan Dos Santos, or for Cesc with Thiago filling in as a CDM like midweek. In my formation, I would sub Xavi off around the hour much like Puyol, with Andres Iniesta playing the remaining half-hour with a view to starting on Tuesday in Germany.

In attack, I would love to see Lionel Messi rested, but we all know how improbable that is. So, Leo will start upfront, and with Tuesday in mind, I would not risk Alexis Sanchez, but play Isaac Cuenca and Cristian Tello on the two wings. Pedro will not be fit enough to start, but if he makes the bench, he could play a cameo role off the bench, maybe even replacing Messi! We can dream can’t we!

Match Prediction: As we are away from home, I reckon a 2-0 is a likely scoreline