With Eric Abidal set to undergo a liver transplant in the next week, and Adriano on the sidelines for around 10 days thanks to a muscle complaint, the Blaugrana are looking awfully thin at left-back. After the departure of Maxwell to PSG in the January transfer window, Pep Guardiola doesn’t actually have a natural left-back in his squad at all. Even looking at Barcelona B, there is only Carles Planas, who is far from ready for La Liga action. Marc Muniesa has been promoted, but naturally he is a centre-half, and the only reason he has been promoted is that he offers a natural balance – i.e. Muniesa is left-footed. So, with both Real Mallorca and AC Milan in mind, I have constructed a number of possible solutions, some more realistic than others. Question is: which one would you prefer Guardiola to use?

Solution One: The Expected 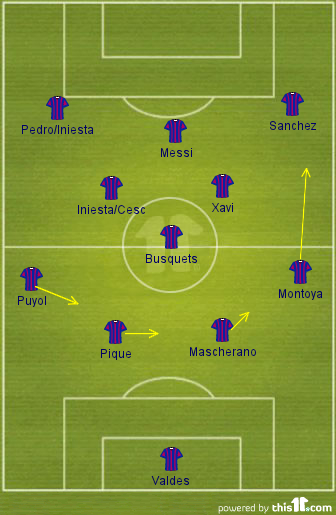 My first idea was exactly the one that Pep Guardiola is most likely to implement tomorrow. With Dani Alves out suspended, the obvious change is to bring in Martin Montoya from the B team, before shifting Carles Puyol out to left-back, much like he was against Granada. The problem with that though is that Barcelona conceded three goals when Puyol was not at centre-back. Admittedly, the reason for two of those goals will be watching from the stands, but I would feel a lot "safer" with Puyol in the middle of defense.

Therefore, if Guardiola does indeed opt for the expected, Montoya is likely to surge forward much like Alves does on a regular basis. If Montoya does move forward, this would allow the rest of the defense to shift one position to their right, forming a 3-4-3 that has become common-place during matches under Guardiola. That would leave Puyol in the centre for the majority of the match, with the possibility of the team switching back to a 4-3-3 when necessary. This seems like the most likely option ahead of tomorrow’s match. 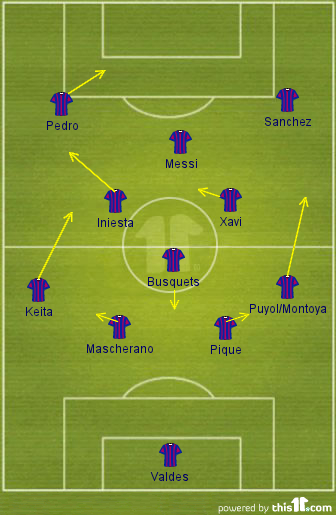 As I mentioned above, I think that the only reason Muniesa was promoted, was because he would provide a natural balance when played at left-back. This is a legitimate concern, after all, how many inverted full-backs do you see in football? Unless there are injuries, I cannot think of a single full-back who is predominantly one-footed playing on their opposite side. It has been experimented with before, such as Fabio Coentrao at right-back for Real Madrid, but ultimately it isn’t used, at least in the upper echelons of football. So, if Pep wants a natural balance to the defense without throwing Marc Muniesa in at the deep-end, why not try Seydou Keita at left-back?

Keita has proved himself to be an adequate destroyer in the middle of the park, and his physique hints that surging runs from deep could be a powerful weapon in his arsenal. Not only that, but Keita is relatively quick and has publicly stated many-a-time that he is happy to play whenever and wherever Pep wants him to play. I understand that Keita is just as inexperienced at left-back in the top flight as Muniesa, but Keita is amongst the most versatile players in the squad, and I would trust him over Muniesa in this high-pressure situation. Pretty unlikely to happen, but could be a good idea. 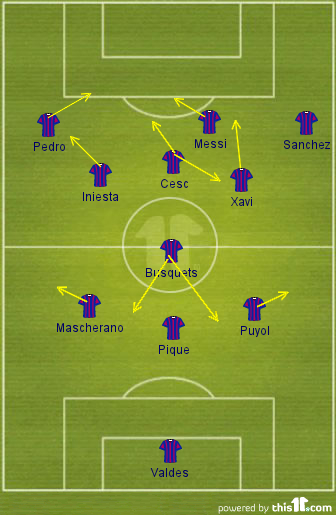 I find it funny that in amongst four options, of which two are completely untested, the 3-4-3 is probably the one that Culés fear most. However, fear not, I think I may have come up with a relatively safer version of it. The usual 3-4-3 includes three centre-backs, two of whom keep the width in the most frightening way possible. Usually left in the middle is Gerard Pique, which on its own is enough to scare a fanbase half to death at the moment. As teams usually attempt to play Barcelona on the counter-attack, there have a few moments when the Blaugrana defense is outnumbered by opposition attackers. Now, this team has re-written defensive textbooks by disproving that teams should never aim for one-on-one scenarios in defense, but while this team is spectacular, it is not super-human aside from one very notable exception.

There is simply no way to defend a team when they have an extra man or three – unless one of the opposition makes a poor decision and gifts possession back to the defending team. So, in lieu of this, if the 3-4-3 is employed against Mallorca, Sergio Busquets should slot back into one of the central defensive positions when necessary, allowing two of the others to push out wide and defend the flanks to create a narrower four-man defense. Puyol would cover the right-flank, while a certain Argentine would cover the left-side, which brings me onto my final solution nicely... 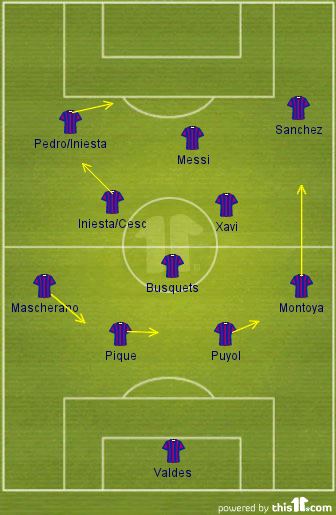 If Mascherano has to cover the left-side in the 3-4-3, why not take it a stage further and ask him to play a game or two at left-back? Mascherano was signed as back-up to Sergio Busquets, and in desperate times, Pep tried him at centre-back. A large portion of the media laughed, suggesting Mascherano wasn’t tall enough, only to have to eat their words as Mascherano has developed into arguably the world’s best centre-back. Well, he is at least in the top five. Who would have ever thought of that back when he plied his trade at Liverpool?

Mascherano certainly has a touch of Fabio Cannavaro about him, and when I watch him, I am reminded of Paulo Maldini. Maldini wasn’t the quickest, but boy was he elegant, and his reading of the game was second to none. Mascherano is a similar player, and Maldini is THE notable exception to my previous statement, playing at left-back for large periods of his career, despite being naturally right-footed. Once again, this 4-3-3 could be transformed into a 3-4-3 depending on Montoya’s attacking work-rate, and in my opinion, this transition would be much more fluid than the others. This is unlikely, but so was his move to centre-back.