Barcelona’s UEFA Champions League first leg match with AC Milan on Wednesday is amongst the most-anticipated in the competition so far, and the two teams are amongst Europe’s all-time elite. Curiously enough, these two teams are widely considered to have created the two best club sides of all-time, with Arrigo Sacchi’s Milan side of the 1990’s surpassed only by Pep Guardiola’s current side, or vice versa depending on your viewpoint. In fact, that Milan side of the 90’s (then managed by Fabio Capello) turned in one of the best performances of all time to defeat Johan Cruyff’s dream Team 4-0 in the 1994 European Cup final. Just like Milan reached a peak in that very match, could Guardiola’s team reach their very best against AC Milam tomorrow?

Most expect Barcelona to triumph over the two legs, which is a little disrespectful to AC Milan and the talent their squad possesses, but probably won’t be far from the truth. Barcelona’s XI looks infinitely stronger than Milan’s in every single position (and I would argue that point with anyone who disagrees), while the Blaugrana are in better form both overall, and in the competition. On Wednesday night, Barcelona will be looking for their tenth consecutive win in all competitions, while Milan only returned to winning ways at the weekend against Roma.

However, Milan have nothing to lose and everything to gain; Pep needs a plan if he is to escape the San Siro with a favourable result. Here is my suggestion 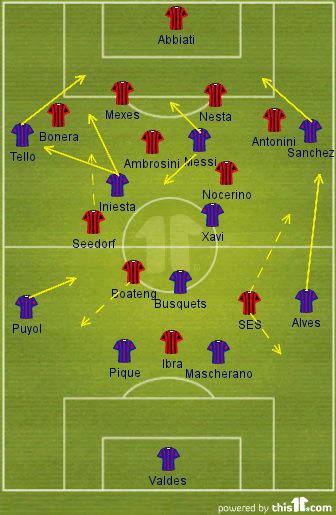 This is the most obvious option for Pep. The main criticism of this Milan side, especially now that Thiago Silva has been sidelined, is that it is too slow. The full-backs are not quick enough, the central defenders are not athletic enough, the midfield is too old and so on. Now, there is an initial problem with talk like that. Firstly, it assumes that pace and power are the only factors of success in a football match. Not true, otherwise Real Madrid would have won the league last year with their squad of athletic freaks. Secondly, it is far too similar an argument to the one levelled against Spain and Barcelona for many-a-year: they are too small and fragile to ever succeed. Look how that one turned out. Sure, Milan are a slow side, but like Barcelona, they do possess quick players, it’s just a shame that the majority of them are injured.

However, the speed and age of the Milan squad will be a huge factor, purely because Allegri will probably go to the extremes in order to compensate. That XI was "borrowed" from a Milan blog, and just look at the defense. Alessandro Nesta isn’t very quick at all, but his reading of the game is second to none. However, Phillipe Mexes is fairly slow and cannot read the game as well as his partner. Then we have the full-backs: Daniele Bonera was superb against Roma at the weekend, but let’s be honest, Roma’s attack is nothing compared to the Blaugrana. Bonera is very much a Puyol-esque defender, who can cover at full-back if necessary, but he will not stay wide like your average modern full-back, instead, he will keep narrow. Luca Antonini is a natural full-back, but in my opinion, is average at best. He isn’t very quick, he isn’t the best defender, nor does he threaten too much on the attack. Jack of all trades, master of none certainly applies to Antonini as far as I’m concerned.

Now, this defense would not have a hope in hell if they played with a high-line. In that situation you can imagine the havoc that Xavi, Iniesta and Messi would wreak with an array of through balls to either winger if Milan operated with a high-line. Remember the 2-6 Clasico? Xavi destroyed Madrid’s high-lying defense with countless through balls, simply because he knew that Thierry Henry, Lionel Messi and Samuel Eto’o were too quick for Fabio Cannavaro and Christoph Metzelder.

So, in lieu of that, I expect Allegri to command his defense to sit deep and stay narrow with a view to clogging the centre of the field, thus limiting the number of chances Barcelona can create through the middle of the pitch. It also limits the amount of chances the two Barcelona wingers, whomever they will be, get chances through their pace advantage. Factor in a likely Trivote midfield, or at least a double pivote of Ambrosini and Nocerino, and Milan are almost certainly going to try the "anti-football" approach, sticking as many men behind the ball as possible with a view to attacking on the counter when possible.

There is nothing wrong with that at all before people jump to Milan’s defense criticising my ideological view of football, but it does play into Barcelona’s hands. How many times have teams come out and attacked Guardiola’s team for 90 minutes this season? How many times has that happened outside of El Clasico? Bilbao is the only example I could think of. The usual approach is for a team to sit back in an attempt to absorb pressure before striking on the counter. It works well for some, and badly for others, but ultimately, you cannot escape the fact that it is familiar to Barcelona. If you go out and attack Barcelona, fighting fire with fire, who knows what you might get, simply because that approach has become increasingly rare.

While AC Milan hail from Italy, play their football in Serie A and possess a much better squad than most teams in La Liga, their approach will be nigh-on identical to that of Real Zaragoza, or to Osasuna, or to Real Mallorca for that matter. That means the overall objectives will be the same: use the full width of the pitch, press high up the field to stop the counter attack and to keep possession as close to the opposition goal as possible.

As for Milan? How many matches do you think they have approached in this manner over the course of the season, and how many matches have they played with less than 35% possession? Well, the two games against Barcelona are the only examples that spring to mind. This approach isn’t entirely new to the players by any stretch of the imagination, but it isn’t usual either, and Barcelona have to capitalise on this.

Over 90 minutes, the odds of Milan playing a perfect game in an unfamiliar approach are incredibly slim. All it takes is one mistake, one missed assignment and the Blaugrana will have a chance at goal. However, what’s the use in waiting for a mistake, when the team is perfectly capable of forcing the opposition into making them?

I propose the usual 4-3-3, with Carles Puyol at left-back, and Dani Alves returning to right-back. The midfield should be the strongest possible, meaning Busquets, Xavi and Iniesta with Cesc settling for a spot on the bench. Then, as for the attack, there is a clear emphasis on pace and energy. Alexis Sanchez, Cristian Tello and Lionel Messi are all multi-dimensional forwards capable of positional interchange, and all are willing to exert masses of pressure on the Milan defense if they dwell on the ball.

If Milan are going to keep narrow, why not capitalise the space they leave open on either flank? Cristian Tello can stay out on the left touchline, while Sanchez takes his place on the right. If they receive the ball on the flank then one of two things will happen: either the respective Milan full-back will stick in their position to keep the pitch as narrow as possible, thus leaving Tello or Sanchez in space, or they will move out wide to close down the winger, leaving space behind them for a midfield runner, or Lionel Messi. From there on in, no matter what decision the Milan full-backs make, Barcelona can attempt to overload in attack. The front-three would become a front five, with Dani Alves and Andres Iniesta joining in from deep, while Busquets would drop back to form a defensive foursome, leaving Xavi as the sole man in the middle, or the quarterback if you will.

This is why Tello should start on the left. When he receives possession on that flank, he is best equipped to "torture" Bonera into a mistake. If he simply turns it into a footrace down the left, Tello will win every time. If he wants to slow play down, before utilising a turn of pace to get into space, Tello can do that. Or if he wanted to change it up, cutting inside with Iniesta moving to overlap on the left, he has enough options for me to suggest that Tello would again come out better.

The same applies for the right side, Sanchez is quick enough to do exactly the same to Antonini, and with Alves in support, it should be easy enough for Barcelona to drive to the byline on either flank. Then, once they get there, they need to deliver a quality final ball. I doubt that lofted crosses are a good idea, but low, driven crosses almost certainly are. Whether they are cutbacks to midfield runners (or Lionel Messi) to catch out the back-tracking Milan defense, or driven across the six-yard box in the hope that the same back-tracking defense either make an error, or that Messi can get on the end of it, similar to how he scored the first goal against Real Madrid in last year’s semi-final.

Obviously, there will be the usual possession football, looking to create chances, but this could be a good alternative if the possession play doesn’t yield results.

Defensively, I foresee few problems, but the problems I do see must be combated. El Shaarawy and Kevin-Prince Boateng are likely to start bearing in mind Pato’s injury problems, and both will be looking to exploit any space left behind by Dani Alves, and possibly Carles Puyol. This will require one of the centre-backs to move across to cover, leaving Ibrahimovic one-on-one with the remaining centre-back. That is something that must be avoided at all costs. For all the stick we give Ibra, he is a great player, capable of changing games on his own. On Wednesday, the defense has to keep the balance between isolating Ibra by suffocating the supply, and keeping Ibra in check by doubling up on the Swede. If they keep the balance just right, then the onus will be on KPB to conjure up something spectacular, and having just returned from injury, that is looking unlikely. However the game develops, whatever tactics are employed, I simply cannot see a reason why Barcelona will lose this tie over two legs.