FC Barcelona travel to the San Siro tomorrow for their UEFA Champions League quarter-final first leg encounter with Italian league leaders, AC Milan. The two sides have squared off twice already this season, with the first match ending in a 2-2 draw at the Camp Nou, and the second ending 3-2 in Italy. If those results are anything to go by, the neutrals may be in for a treat when two of Europe’s most successful clubs face each other tomorrow night. However, no matter how entertaining the match is, one set of fans is set to be disappointed.

Now, the only question is, will us Culés be scratching our heads wondering what went wrong, or will it be the Milanisti who are left to suffer the anguish of yet another defeat to the Blaugrana? Only time will tell, but both the formbook and common opinion amongst journalists suggest that the former is a far less likely proposition.

As far as injury problems go, Pep Guardiola is drawing ever closer to a full squad of players. Whilst David Villa is still a month or so away from a comeback, and Adriano is unlikely to feature until next week at the earliest, there is good news as Ibrahim Afellay has been named in the provisional squad, although the Dutchman is highly unlikely to play any part in the match. Milan on the other hand are going through a rather troubling injury crisis, with Ignazio Abate, Alexandre Pato, Antonio Cassano, Mathieu Flamini, Rodney Strasser, Mark van Bommel and Flippo Inzaghi all ruled out for one reason or another, while Maxi Lopez and Robinho face late fitness tests. On top of that, the trio of Alessandro Nesta, Clarence Seedorf and Kevin-Prince Boateng have only just returned from injuries themselves and are unlikely to be at 100% for such a massive game. What could possibly go wrong for Barcelona?

Well, Pep Guardiola seems to think complacency is going to be the major issue, and I agree totally. This team is good enough to beat anyone, from whatever league, whatever continent, whatever point in history in fact; it’s just a question of whether they put in the effort to do so.

"We'll have to prove our worth again, the objective to stay motivated after all we've won, to compete until the end. Treble still possible? I don't look further than the next game. If we lose tomorrow and on Saturday, that's two trophies gone."

Clearly, Pep feels that motivation is the issue, and his quotes in the pre-match press conference hint to me that he wants the team to send him a message tomorrow. As per usual, he will give out the ingredients for success; it’s down to the players to cook up a treat on the San Siro pitch. With the title race becoming a factor once again, it would be so easy for the players to get carried away with their own hype. Even though they have been playing badly over the course of the season, they are still in with a shout of winning the title, surely they can get away with an average performance here and there?

Not so, Pep says "the only sure thing is that if we don't play two extraordinary games we won't make it to the semi-final". Once again, I agree totally, but I have faith in the team. They have been in this situation plenty of times before, they know what it will take, and I think they will deliver.

Despite my tactical analysis, I think that Pep will not start Cristian Tello, instead opting for Cesc Fabregas and shifting Andres Iniesta out to the left wing. 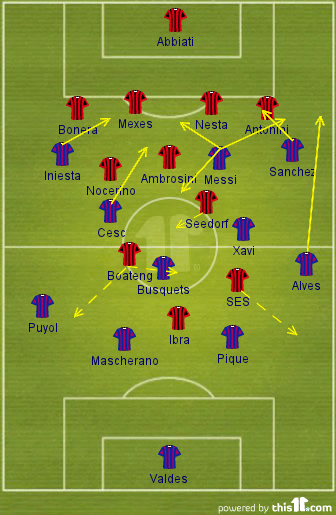 That has been my only problem with Cesc; how he disrupts the balance of the team when played in this manner. The 3-4-3 is not viable in the large majority of cases, while this 4-3-3 is too narrow for my liking. It takes Iniesta out of his comfort zone, which just so happens to be a comfort zone where he has challenged for Ballon D’Ors from and a comfort zone from which Cesc Fabregas has not challenged for Ballon D’Ors from. Is that really a smart move? Well, Guardiola seems to think so.

With Pedro struggling with his form, this 4-3-3 is the strongest XI we can possibly field, and I accept that, but it’s all a little too Galactico for me. Why does Cesc have to play when there are better options for the team on the bench?

However, it will keep possession, and possession will be vital tomorrow. Barcelona need to keep the ball as much as possible, not just to stop Milan from scoring, but also to wear away at what will be an exceptionally disciplined, and expertly drilled defense. Italian coaches have a reputation for forming unforgiving defenses, and the Milan side we face tomorrow, coached by Allegri is unlikely to be any different.

From this 4-3-3, the only real trouble is the lack of width on the left-hand side. Iniesta will look to cut inside, while neither Cesc nor Xavi are effective pushing out wide. If Puyol ventures forward he will leave the defense exposed, and being honest, he is unlikely to really have an impact on the left-wing anyway. Depending on which flank the Milan attack is situated (i.e. if Boateng or El Shaarawy has the ball), then Busquets must adapt accordingly. If SES gets the ball and tries to exploit the space left behind by Alves, then Pique should move across to cover with Busi dropping back to cover for Pique. While a lot of the plaudits directed at Guardiola are for his construction of a fluid attack, he deserves equal praise for creating such a fluid defense.

This is by far the most important match of the season so far for either club. Barcelona have to step up to the plate.

Match Prediction: Barcelona to win 3-1 with Messi scoring twice, and Xavi getting the other. Ibra on the scoresheet for Milan