Last night’s match was an enthralling encounter between two of the best teams in the world, so why exactly is everyone so downbeat? Well, purely because Barcelona should, can and will have to do much better in the return leg if they are to book their spot in the semi-finals for the fifth successive season – a new competition record. Despite the prediction of goals galore, we cannot truly be surprised by the end result: once again the fear of losing overrides the will to win for at least one of the teams. Sure, nullifying Barcelona’s attack is a fine achievement, but a 0-0 draw at home is far from ideal for Milan. Unless Allegri fancies his chances on penalties with the exact same gameplan, Milan need to score, which also means that they will need to attack Barcelona. At the Camp Nou. On a wider, and better maintained pitch. Looking at it that way shows that Milan have a difficult task ahead of them; Barcelona just need to show up.

At the Camp Nou this season, there has only been two final scores that would send AC Milan through if repeated, and both are 2-2 draws. The most recent was against Real Madrid in the Copa del Rey, while the second coincidentally was against AC Milan in one of the opening matches of the season. What about the odds of AC Milan winning at the Camp Nou? Well, the last time Barcelona lost at home was against Hercules some 15 months ago. The last time they lost at home in the competition was against Rubin Kazan, 29 months ago. The 0-0 was not ideal, but the Blaugrana are still favourites to progress and rightly so. While the title reads Tactical Analysis, this is more tactics and statistics rolled into one!

What sets the UEFA Champions League apart from the World Cup in my opinion is the tactical battles between the coaches when the competition progresses to the latter stages. Think back to the World Cup in 2010 for instance. Game-plans were ill-advised and poorly executed on the whole. In some cases I don’t even think that the teams had a set plan for the match ahead (*cough*England and Argentina*cough*). Arguably the most in-depth tactical battle was the final itself, where Spain played their usual style, while Holland "kicked them up in the air". There wasn’t a parking of the bus, just disruptive fouling. Last night though, we saw it all.

There was a surprise inclusion in an attempt to throw the opposition such as the start for Seydou Keita, while Milan had a trick of their own: Robinho starting despite a supposed injury. We were treated to two centre-backs at full-back as both sides looked to narrow the field, a Trivote to stifle Barcelona’s creativity and there was positional interchange in abundance. See below my rough recreation of the average positions for either side, with Whoscored.com being used as a reference. 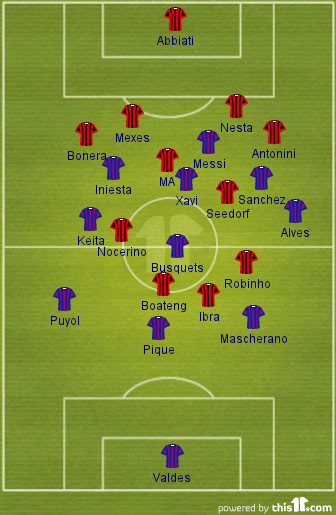 Whatever way you look at it, it is not a 4-3-3 at all. In fact, as Barcelona were in possession for the majority of the match, the average positions resemble a four-tiered approach from Barcelona. You have the three natural centre-backs, with Puyol a little wider than his colleagues thanks to his base position, while ahead of them you have Sergio Busquets as a deep-lying pivot, with Dani Alves and Seydou Keita taking on the role of wing-backs. In front of them there is the triumvirate of attacking midfielders: Xavi, Andres Iniesta and Alexis Sanchez, who were clearly attempting to pre-occupy the Trivote, all so that Lionel Messi could actually find space in between the defense and midfield to work his magic.

These average positions aren’t particularly precise, as for example I remember the Milan Trivote playing much deeper over the 90 minutes, but this was a clear 3-3-3-1 formation, similar to the one Marcelo Bielsa employed throughout the World Cup. However, Bielsa’s was successful as he placed an emphasis on width in what was an hourglass shaped formation, but Barcelona’s was more of a rightward leaning rhombus. I didn’t expect to write anything like that 24 hours ago...

The left-hand side was left empty, until the introduction of Cristian Tello that is, and Daniele Bonera had one of his easiest games in defense. That was reflected in the stats as well, as a paltry 21% of Barcelona’s attack come down that left-flank. Considering Bonera was out of position, that is simply criminal. Instead, Barcelona tried to force the issue down the middle of the pitch, with 45% of their attacks coming through the middle, which is exactly what Milan wanted.

When Barcelona attacked through the middle, Milan were in control. Sure, they didn’t have possession, but they practically dictated each pass that Barcelona made, and the tempo that was set. Milan merely stood there, goading the Blaugrana on a little bit, and Barcelona imitated them brilliantly by keeping the passes at a walking pace. There was no spark, no acceleration, and no spontaneity about the Barca possession. Dare I say, there was no purpose.

It was a sterile domination, very similar to the domination shown in the 2-1 defeat to Arsenal this time last year. However, I don’t think it was for a lack of trying (well maybe just a little...) but because Milan didn’t allow the space. How can you accelerate when a Milan player stands five foot away from you? How can you increase the tempo of passing when there is no-one to pass to in space? Milan knew that Barcelona were going to threaten through the middle, so they stuffed seven men into a narrow space and told Barcelona to do their best. They gifted them the wings, but what a lousy present as both flanks were in poor condition and totally negated the pace and trickery of the players who dared to play on them.

Barcelona were not clinical, creating 18 shots, but only managing three on target, the same number as Milan mustered even though they only took a third of the shots that Barcelona managed. However, I have a feeling that the Camp Nou will be a different story in just five days time.

Stat Quiz: Name the opposition the last time Barcelona drew the first leg of a UEFA Champions League knock-out tie. The answer to the last question was Real Sociedad, and that was correctly answered first by Sebanovic!