What a fine 90 minutes of football we were treated to last night. Athletic Bilbao entered the Camp Nou as slight underdogs, in what was supposed to be a close encounter between two of the best teams in Spain. By the end of the match however, one can imagine that Bilbao were grateful to hear the final whistle. Some matches disappoint, some matches live up to expectations, but then there are matches like this: 90 minutes of exhilarating entertainment; football is its purest form. The best part about that? In a little over a month, at the Vicente Calderon, we get to see it all over again.

Barcelona’s game-plan was superb, and executed near-perfectly. They pressed high up the field, asphyxiating the Bilbao backline, forcing them into mistake after mistake, whether they chose to "alleviate the pressure" by thumping the ball away or if the pressing led to a stray pass or loose touch. The end result was almost always the same: Barcelona retaining possession in the Bilbao half. In fact, a staggering 37% of the match took place in Athletic’s defensive third, with a further 48% in the middle of the field. Just take a look at the average positions for each side below: it is plain to see which side was in control. 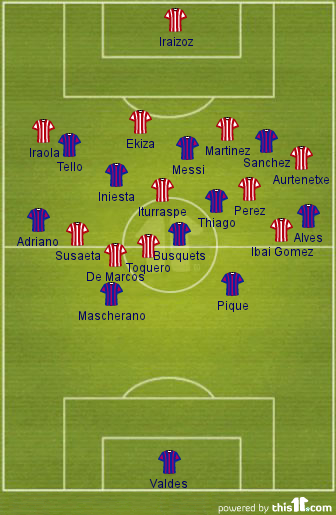 Almost every single Bilbao player is inside their own half and certainly not through choice. Marcelo Bielsa has built up a reputation as an attack-minded coach, and there is no way he sent out his team to "park the bus"; instead it was Pep Guardiola’s tactics and the Barcelona players that forced Bilbao to drop deeper and deeper into their own half. Depending on what way you look at it, Barcelona’s average formation could be anything from a 2-3-2-3 to a 2-4-4, but there is no denying that there was a certain fluidity about the Blaugrana last night, more so than usual anyway.

The defense took it in turns to surge from deep, with Gerard Pique and Adriano embarking on multiple runs from the back, while Dani Alves was positioned as a pseudo right-winger as per usual. Sergio Busquets was exemplary in the middle of the park, but even he ventured forward on occasion. Thiago and Iniesta were superb, drifting forward with relative ease, combining well with both each other and the attack to create chance after chance. Also, when necessary, the attack tracked back and hurried the Bilbao players along, chasing down lost causes, sometimes reaping the rewards as well. I cannot speak highly enough of the collective effort we witnessed last night, purely because no other team in World Football could keep up with the pace demonstrated last night. There’s a whole article to this next sentence; but few teams can both push the tempo of a match, and simultaneously control the opposition as Barcelona did last night.

Up until the 80th minute, it had been a master-class. Barcelona were 2-0 up and the Spanish TV directors revealed that telling statistic: Tiros (shots): Barcelona 20-0 Athletic. This was one of the teams of the season in Europe, the team that eliminated Manchester United with ease, the same opposition that held Barcelona to a 2-2 draw earlier in the campaign. They simply didn’t have an answer. Marcelo Bielsa, one of the finest tacticians of our generation, had no response. Until Barcelona momentarily let their foot off the gas.

This season has been plagued by complacency, and it threatened to rear its ugly head again. Iker Muniain, through on goal after a simple pass, slotted past Victor Valdes. Fortunately, Gerard Pique, the man every loved to hate just weeks ago, slid to the rescue, clearing the ball off the line, saving a certain goal. Football is a fickle sport, Pique’s poor form has been near enough forgotten, but make no mistake, had that ball of rolled into the net, it could be a completely different story. Maybe this goes to show that Barcelona really have turned the corner, but it was an unwelcome reminder about a dark time in the season.

Moving onto Tuesday and that pivotal clash with AC Milan, Barcelona have to build upon this performance if they wish to qualify.

Stat Quiz: Telmo Zarra's long-standing record of 38 goals in a La Liga season was broken last season by Cristiano Ronaldo, and looks set to be beaten once again this season, by both Ronaldo and Lionel Messi. What I want to know is what season did Zarra set his record?