Judgement day is upon us. Well, not quite, but tomorrow evening FC Barcelona play host to Real Madrid in the match that will almost certainly decide La Liga. Well, unless Barcelona win, where then it would be down to Sevilla or more likely Athletic Bilbao to decide La Liga, but you get my point. Of all the Clasicos we have seen in the past year or two, this is the one that is flying under the radar, despite the fact that it could well be the most important. After the two teams lost in midweek, we are in uncharted territory. FC Barcelona could lose consecutive matches for the first time since the end of the 2008/09 season, and being brutally honest, for the first time in truly competitive matches under Pep Guardiola. Real Madrid on the other hand haven’t lost in consecutive matches since last April. Guess who inflicted one of those defeats? Yup, you guessed it: FC Barcelona.

Curiously enough, the other defeat for Real Madrid was against Real Zaragoza, with that match taking place in-between their UEFA Champions League semi-final matches with the Blaugrana. The stats hint at a Barcelona win, but of course we know a Clasico can never be that simple. All we know is, that Barcelona simply have to win this game, and when placed in that situation, they almost always succeed. Over the course of Guardiola’s reign, I can only think of the Copa del Rey final where Barcelona have outright failed to win when necessary. Under Guardiola, Barcelona have played some outstanding football and attracted a vast number of plaudits for it, but ultimately, they have been a bona-fide winning machine the likes of which the world has not witnessed in a very long time.

Heading into tomorrow’s match, Pep Guardiola was dealt a body blow as Alexis Sanchez has been all but ruled out of contention. The Chilean wasn’t at his best on Wednesday night (I mean how do you miss this?) but his contribution this season has been absolutely pivotal at times, especially against Real Madrid. Of course Alexis was the man who got the equaliser in the Clasico in December, and some sections have forgotten his fine displays in the Spanish Super Cup, even if he didn’t grab a goal in either of those matches. However, for the sake of this match in particular, I am not overly distressed.

The only selection worries for Guardiola revolves around the potential for rotation ahead of that equally if not more important second leg match with Chelsea on Tuesday night. While Jose Mourinho is theoretically plagued by the same problem, it is worth considering the impact an extra day’s rest either side of this match will have on his selection, not to mention the athletic superiority of his squad compared to Barcelona. Furthermore, his "dilemmas" are far less problematic: Karim Benzema vs Gonzalo Higuain is a situation Guardiola would love to be in right now. So, while it is true that Barcelona need the three points far more than Real Madrid, the pressure is on Los Blancos to escape the Camp Nou with a favourable result. Lose, and their season and indeed Mourinho’s job could be in jeopardy. With that in mind, I think we can safely assume Madrid will be playing for the draw, and rightly so. 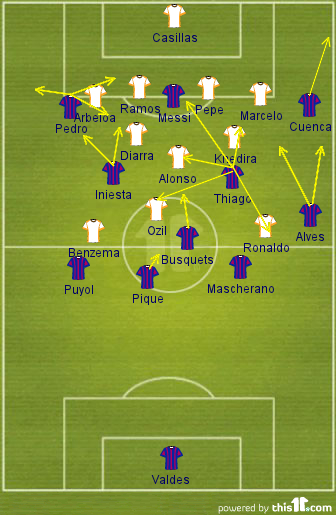 Bearing that in mind, I am almost certain that Mourinho will opt for Trivote, meaning starts for Xabi Alonso, Sami Khedira and a return for Lass Diarra, purely because Esteban Granero is not suited to a wholly defensive role in the team and Fabio Coentrao is just not a midfielder, no matter how many times Mourinho opts to play him there. Furthermore, Coentrao may be required to start at left-back (despite his average performance vs Bayern) because of Marcelo’s uncanny ability to make mistake after mistake against the Catalans. Aside from that, it will likely be business as usual for Madrid in defense, with Sergio Ramos and Pepe in the centre and Alvaro Arbeloa out wide-right. Or narrow right as it will likely turn out.

Then, I decided I might be a little abstract. How would Real attack in a Trivote? Ronaldo at CF? Benzema at CF? Higuain on the wing? Well, how about two attackers in Cristiano Ronaldo and Karim Benzema who each start a little wider in an attempt to disrupt the Barcelona defense, and a link-up/enganche in Mesut Ozil? This way, Madrid can attempt to limit the forward runs of Dani Alves, or at least exploit them if he ventures forward, and possibly goad the Blaugrana centre-backs to step forward as auxiliary anchormen if Barcelona have possession. But that’s enough about Madrid (check out SBN’s Real blog Managing Madrid if you are into that kinda thing), how should Barcelona approach a Trivote?

Much like my projected Real Madrid formation, I doubt expect Guardiola to follow this plan in any way, but hopefully it will provide some food for thought and even if the personnel aren’t right, the ideas will be evident in Barca’s play. I suspect Pep has little choice but to go for a back-four of Alves, Pique, Mascherano and Puyol, although Adriano could well start over Pique yet again depending on the latter’s fitness. Whatever the case, I think Alves will have license to roam forward as usual, and his overlapping runs will be vital down that right hand side. In midfield, Sergio Busquets will start, and his role will take on a great importance. Not only must Busi anchor the play and circulate possession quickly to up the tempo, but he has to push forward when he can so as to either pre-occupy the Trivote (it would become a three-man midfield on a three-man midfield) or at the very least, pull Mesut Ozil away from our goal. If he can succeed in at least two of those objectives, Barcelona have a better chance of avoiding defeat, and from that base, they can begin to build for the win.

Considering Cesc’s new-found awfulness and Xavi’s injury troubles, I think we might see a start for Thiago Alcantara, which would be great for a couple of reasons, but is also unlikely as there is no indication that Xavi is particularly struggling other than his form. Either way, I think this match would benefit from the presence of someone like Thiago, at least if Mourinho does park the bus. In that situation, Thiago’s pace would be crucial in defending the Madrid counter-attacks, while his relative physicality and athleticism would be useful in providing that Plan B if the Plan A doesn’t go entirely to plan. Not only that, but Thiago is a threat from long-range and while I am not suggesting Madrid defend base on reputation, I feel that Thiago would be afforded/allowed slightly more space than Xavi because of his unproven record. Lastly, how many times on Wednesday did Barcelona move the ball forward, only to back out of that final pass and choose to maintain possession instead? Thiago’s youthful arrogance could be key in breaking down an organised defense, or at least making them work that little bit more.

That would mean that we would be in need of a controlling performance from Andres Iniesta, but when has Andres ever gone missing? He played the 2009 Champions League final with a tear in his thigh, but still dominated Manchester United; I have no reason to doubt him tomorrow.

Same with Pedro on the left-wing (or right). No matter what, Pedro has always scored when it matters most. It didn’t matter what form the team were displaying, nor the form he was displaying; when this team needs a goal, Pedro is often the man who comes up with the goods. What Barcelona lacked against Chelsea for the most part was intensity – that will to win – and you cannot deny that Pedro brings an insatiable enthusiasm for the game with him for every match. His pressing lifts the fans, and crucially, it inspires the players as well. Both Arbeloa and Marcelo are potential weak links, and Pedro is the man to exploit that weakness, at least in my book anyway. I’m sure Gabe will agree if no-one else!

In Sanchez’ absence, I would love to see a start for Isaac Cuenca in a bid to stretch a Madrid defense that will almost certainly try to narrow the field. Whether he drags Marcelo out wide (the Brazilian does have a tendency to wander after all) or Arbeloa does not matter, so long as that defense is stretched, we can be happy. Not only that, but Cuenca’s turn of pace and subsequent delivery could create chances not dissimilar to Messi’s goal last season in the UCL, assisted by Ibrahim Afellay. In that sense, Cuenca is a unique player as he can stretch any defense with just a few yards to play with, and create chaos with his final pass, a skill that might be indispensible against a deep-lying Madrid side.

As for Lionel Messi, what can I say? The man has evolved past the use of mere arrows; he can go wherever he likes, I just hope it’s in between the Trivote and the defense. If he drops deeper he will be faced with a seven-to-ten man Madridista wall, and we don’t want that again. While part of me is resigned to a four man marking scheme on the Argentine, the other part of me thinks back to that UCL semi-final, the Supercopa and the hat-trick way back when. The world throws new challenges at Messi every week, and he usually comes out the other side unscathed; in Lionel Messi, Barcelona have a WMD, one that could quite easily score at any given time, in any given situation. No matter what happens, it promises to be one heck of a match.

Match Prediction: Remember that bit I said about Barcelona being a bona-fide winning machine? Well, I wouldn’t want to jinx it either way...