CRISIS!!!! If we truly believed every word the media published, I think it’s safe to say the world as we know it would cease to exist. Speculation and sensationalism are rife in modern media, so much so that it’s hard to distinguish where the opinion ends and the facts begin. For example, having suffered two successive losses, some journalists are claiming that Barcelona are not only in decline, but have been knocked off their pedestal. According to some, Barcelona’s indomitable brand of possession football remains highly marketable, but is losing its edge, while its arch-enemy Catenaccio has finally caught up.

As Roberto Di Matteo proved last week, Barcelona’s variation on Total Football is not without its weaknesses and Jose Mourinho reinforced that point on Saturday. However, it doesn’t matter how hard you try to dress it up, both sides went out with a game-plan at least inspired by Catenaccio. While Barcelona fans (and players) attract a lot of criticism for their "superiority complex", I think it’s worth mentioning that the support shown to the Catenaccio-based tactics by fans of each club and the subsequent criticism (whether direct or implied) of tiki-taka indicates a superiority complex towards Catenaccio or the counter-attacking philosophy.

Regardless of that, we cannot escape the fact that Barcelona have had difficulty breaking down these ultra-defensive tactics, and while I hesitate to admit that Barcelona are in crisis, a Plan B would be nice. So, with that in mind, here are a couple of keys to victory and a rather abstract idea for a Plan B.

Key Number One: Runs behind the lines

While it’s unfair to label Chelsea’s approach last week as true Catenaccio, it was almost certainly influenced by it. In fact, one could argue that it was a more extreme variation on the system that Helenio Herrera pioneered in his time at Internazionale. While Herrera’s teams operated out of a 5-3-2, it could be argued that Chelsea’s 4-5-1 was actually more defensive. For a start, there was no libero to start attacks (nor end Barca attacks I should add for balance) and while a 4-5-1 hints at a balanced if slightly defensive approach, a more accurate description would 4-4-2-0, with four defenders behind a line of four defensive midfielders and two players occupying the usual midfield positions (Mata and Drogba). Some described it as a 9-0-1, but ultimately all this does is display the limitation with using a sequence of three or four numbers to describe a formation. Perhaps it would make more sense if we described the midfield as a quadruple pivot, or as I would prefer to call it, a "quadrivote"?

Whatever you want to call it, however you wish to describe it, one thing’s for certain: it is nigh-on impossible to break-down. 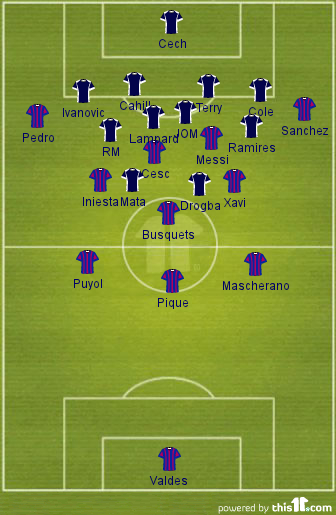 This picture pretty much shows the positioning of Chelsea’s defense and midfield last week at the Bridge, with the most important part being how tightly packed the final third was. Chelsea’s defense sat deep, which wasn’t a surprise. Neither was it a surprise that they kept as narrow as possible; they were both expected and really, if RDM had opted for a deep-lying narrow defense alone, we wouldn’t be having all this trouble because Barcelona carve through deep-lying defenses on a weekly basis. However, when you add in a Trivote – or in this case the Quadrivote (it will catch on I swear!) – Barcelona encounter problems. With around 5 metres of space between defense and midfield, there is little if any room for the false #9’s to do what they do best, and it doesn’t matter whether the false #9 is Lionel Messi or not, because no mere mortal can be expected to make an impact against a wall of six-eight players. However, this is not to say the false #9 becomes entirely irrelevant, far from it in fact.

While there isn’t a lot of space for them to exploit, chasm-sized gaps appear in the opposition defense. Ladies and gentlemen, I present to you the school-boy error that is ball-watching.

It’s painful to watch this miss again, but Xavi’s miss against Real Madrid is the perfect example of the havoc Lionel Messi can cause without ever entering an opposition penalty area. Messi doesn’t need to be approaching goal, or even intending to at any stage. All Messi needs to do is be in possession of the ball. The first time Xavi passes to him, I count at least three Real players turning their attention to the Argentine and even in that split second, it is plain to see that Real’s defense is well-organised, but ripe for exploitation. So when Leo gets on the ball for a second time and starts dribbling is it any surprise that a simple freeze frame shows no less than SIX Madrid players focusing solely on Messi and the ball? 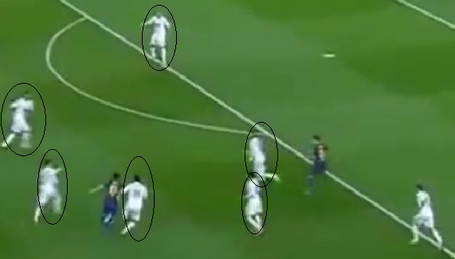 Apologies for the shoddy picture quality, but it shows the main weakness of such an ultra-defensive stance, and while the only consequence for this lack of concentration being Xavi’s miss, it could have just as easily been an equaliser. Borrowing the line-up projected by Inder in his tactical preview, Barcelona’s line-up could have around five players who can run behind the lines (Sanchez, Pedro, Xavi, Cesc and Iniesta) and in Lionel Messi, they have the ultimate distraction.

Key Number Two: Make it a game of transitions

So then, if you can’t break down a defense with wave after wave of attacks, what do you do? Roberto Di Matteo specified that he will "look at the strengths of his team" before deciding upon tactics, and he was adamant that Chelsea will be looking for another goal. Therefore, I think it’s pretty obvious that Chelsea will once again be playing on the counter-attack. The question is: why does that matter?

Well, if Chelsea are looking to play on the counter, then why not allow them the opportunity to counter?

The thing is, Barcelona are looking unlikely to score against such a well-drilled defense, but, if they can draw Chelsea out from their defensive shells, they will have space to manipulate/exploit and the only way I think they can do this is by making the game as frantic as possible. I’m not saying Barcelona over-commit and purposefully lose possession, but allowing Chelsea the odd attack wouldn’t exactly be the worst thing in the world would it?

Thinking back to the match against Athletic Bilbao, the Blaugrana went into the game without Xavi, never truly dominated possession, but entirely dominated the match. They played off of Bielsa’s tactics, making the match as frenetic as possible, and it’s clear to see who reaped the rewards as Barcelona nullified their opponents for 80 minutes, not allowing a single shot on goal in that time. Admittedly, Athletic were heading into the game fatigued, but it’s not like Barcelona’s schedule was overly kind either. High risk? Perhaps, but upping the tempo of the entire match could certainly carry a high reward. 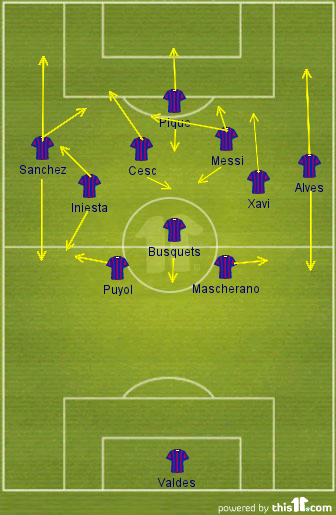 I know what you’re thinking; you’re thinking I’m absolutely crazy, but of course this wouldn’t be a formation Pep Guardiola ever started with. Instead, imagine (God forbid) that Barcelona still needed a goal heading into the last 20 minutes of the match. At this stage Chelsea have been in their own defensive third for so long that they are almost a part of the Camp Nou pitch, and the possession game isn’t working to the extent it should. In fact, remember when Barcelona were in a similar situation back in 2010 when they needed two goals to progress past Jose Mourinho and Internazionale? At that stage of the match, Gerard Pique went up-front.

It’s a rudimentary tactic that has been used for years; teams need a goal in the dying stages of the game so they throw their centre-back forward in the hope that his aerial prowess can drag the team back into the game. However, while Barcelona could send Pique up-front and bombard the Chelsea defense with cross after cross after cross, they can do so much more with Gerard in attack.

In this situation, Pique would require man-to-man marking from at least one of the Chelsea defenders, and as much was made of Drogba’s height advantage, would it be unfair to suggest that Pique would have a similar advantage over John Terry and Gary Cahill? At 6’4", Pique holds at least a two inch height advantage over both Terry and Cahill, while I think it’s safe to say that Geri is as strong as they come. Just in terms of sheer physique, Pique would make a superb target man, and when you factor in his La Masia schooling, Pique becomes more than just an auxiliary target-man, he becomes a target-man and enganche rolled into one.

Against Inter, Pique scored a quite simply superb goal operating as a centre-forward, while his back-heel assist for Messi in El Clasico serves as a perfect example of his La Masia influenced build-up play. I wouldn’t expect to see it tonight, but as time progresses the prospect becomes more and more appealing. Pep usually pulls a trick or two out of his sleeve with regards to team selection, maybe just maybe Pique at CF will be one of them...