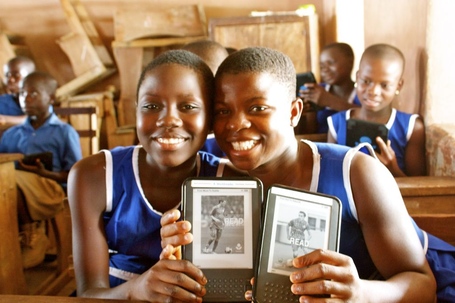 Més Que un Club - We all know what this means (at least I hope so!). It represent what FC Barcelona stands for on and off the pitch. The club has often showed how much helping people in need means and it is currently involved in many different campaigns, including helping to eradicate polio and fighting AIDS with UNICEF.

Now Barça has teamed up with Worldreader, a non-profit organization granting access to books and increasing literacy in developing countries. This particular campaign is focusing on sending 1 million e-books to students in the Sub-Saharan Africa. A donation of (only) $5 brings another e-book to students, so let's make sure we all make a contribution to this great cause. Donations can be made through millionbooks.worldreader.org.

With the help of Russ Mackey from Worldreader's PR department I was able procure information that you won't be able to find in the official press release. The questions were answered by many different people at this great organization, from the PR department to the co-founder/CEO David Risher, so I thank all of them not only for taking the time for my question, but also for the amazing work they do to make the world a better place.

(Much) more information after the jump!

What is the name of the campaign?

How did the partnership between the two sides materialize?

It was actually through some luck and coincidence that it happened. One of the Worldreader employees living in Barcelona had a child trying out for one of Barca's youth programs, so she in that time met some people from the Barcelona Foundation who were interested in Worldreader after learning what she did for work. They talked about it over time and eventually got a meeting set up, where Worldreader proposed the idea of having Barcelona players and images go straight to the children's e-readers with inspirational messages. This also partially answers your last question, but Worldreader didn't actually ask Barca for money, but rather just their support. Barca gets upwards of 500 requests a week for non-profits asking for donations to their cause, so of course they can't say yes to all of them. The resulting deal was more of the fact that Barcelona had a chance to promote all of the Foundation's core values and do something good in the world, all while their football season was going on.

What is the goal of the campaign?

Obviously the current end goal is to send 1 million e-books to Africa, but at the same time it's to promote the Worldreader name which in turn drives donations. The message is that a $5 donation = 1 e-book to a child in Africa.

From Barcelona's end, it's about promoting their core values I linked to earlier (all of which are relevant to this announcement) 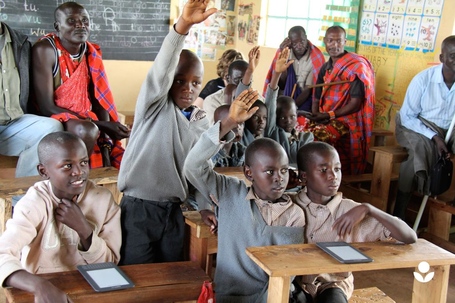 How do you intend to increase literacy with Barcelona's help?

Worldreader is using the significantly cheap e-reader technologies available to deliver libraries of books to children's hands. Previously the only thing happening was people sending old paperback books that could be outdated by decades. Not sure how it worked for you, but growing up my school had "book drives" where people donated all their old books to a cause similar to this. With e-readers, kids can get the book of their choice instantly, not the book of my choice from 20 years ago that's more than likely not relevant to them. Kids are becoming more aware of the world around them, and using existing cell phone technology (no regular internet required, which is very important to note) they're able to get up to the minute news as well as read books they never before had access to.

How is Barcelona expected to help Worldreader to achieve the goals you set have set?

Inspiration is the key factor here. Barcelona players have sent personal messages that show up on the children's e-readers every time they turn them on. They're short and to the point, but effective (ie. "I read, do you?" - Abidal, "Champions read!" - Xavi, "Every book is a goal!" - Messi). Barcelona is also going to promote on their social media channels like Facebook and Twitter, and some of the Barca players like Messi might be doing the same.

(If it's not a secret) how much money goes into a campaign like this?

So this has all pretty much been touched on above, but to recap, all the math from the logistics boils down to $5 = one e-book. So of course the end result will be $5 million in donations when the 1 million e-book milestone is reached. Worldreader didn't actually approach Barca asking them for money, so I don't know specifically if they will be donating to the cause, and if they are, I don't know how much.

This may sound a bit silly, but what happens when the 1 million book mark is reached? Does Worldreader start a new campaign or will people still be able to donate for this cause?

Who knows. The 1 million is simply the first goal Worldreader has set for themselves. It’s safe to assume they’ll set a new target of some kind, but at this point it would be purely speculation as to what that target would be (could be anything, not just a number of e-books milestone). 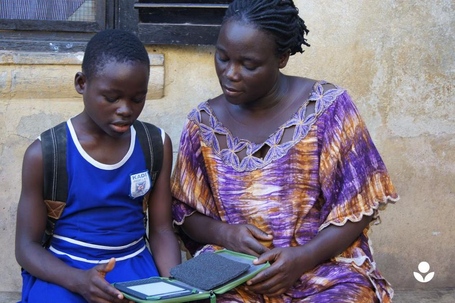 BARCELONA, SPAIN & SAN FRANCISCO – May 24, 2012 – Worldreader (www.worldreader.com), the non-profit transforming reading in developing countries by distributing digital books to children with limited access to literature, kicked off a campaign today with support from renowned soccer team FC Barcelona (Barça), asking people to help send 1 million e-books to students in sub-Saharan Africa. Using new technology and digital platforms, a $5.00 donation to Worldreader provides students in Africa to access books that teach and inspire, so they can improve their lives. Donations can be made through millionbooks.worldreader.org.

Having already put more than 100,000 e-books into the hands of 1,000 students in Africa, Worldreader is committed to further increase access to digital books in developing nations. Children in the Worldreader program have access to materials ranging from hundreds of local African textbooks and story-books, world newspapers, and classic literature from around the world. For the first time, students in these areas can read books from African authors like Meshack Asare and Peggy Oppong, experience the imagination of Roald Dahl and the joy of the Magic Tree House stories, and learn from local Ghanaian and Kenyan textbooks. With immediate access to books on health and science students are discovering how to better diagnose, treat and prevent diseases in their communities.

"Worldreader is committed to putting a digital library in the hands of all children throughout the world’s developing countries, and we’re thrilled with the support of FC Barcelona to send 1 million e-books to students in Africa," said David Risher, CEO and Co-Founder of Worldreader. "Together Worldreader and Barça are connecting students with their heroes to awaken their passion for reading and improve their lives."

Together Worldreader and Barça hope to use the popularity of the world’s most famous soccer club to inspire students to continue reading. Appealing to the students’ love of Barça, some of the team’s biggest names including Lionel Messi, Xavier Hernandez, Eric Abidal and Seydou Keita, send encouraging messages to students inspiring them to read more and "score big." Students in the Worldreader program receive messages from their favorite soccer heroes beamed directly onto their e-readers.

With plans for continued expansion around the world, Worldreader is already operating throughout sub-Saharan Africa with projects in Ghana, Kenya, and Uganda, and soon Rwanda. Beyond granting student access to literature, Worldreader’s unprecedented work also helps give local authors and publishers new reach. The organization works with African publishers and writers to help digitize books and bring their stories to a broader audience. By giving students access to a plethora of books by both local and foreign authors, Worldreader is changing the way students view the world.

"We’re so excited to be able to give our students the well-deserved opportunity to read a wide variety of classic and cutting edge literature by renowned authors," said Jacqueline Abiso Dzifa, a teacher at Presbyterian Primary in Kade, Ghana. "Worldreader has not only given us unparalleled access to books, the program has motivated my students and instilled a joy for reading that never existed before."

A U.S. and Europe-based non-profit social enterprise, Worldreader launched the first iREAD project in Ghana in November 2010. The project was the first pilot study to ever involve classroom use of e-readers in underprivileged areas. Independent monitoring and evaluation done by Worldreader and funded by USAID revealed that primary school students receiving e-readers as part of iREAD increased performance on standardized test scores from 12.9% to 15.7% (depending on whether they received any additional reading support).

Donations can be made at millionbooks.worldreader.org. Donations starting at $5.00 are sufficient for Worldreader to send one e-book to students in Africa. For more information, please visit www.worldreader.org.

Worldreader is a US- and European not-for-profit organization that aims to put a library of digital books within the hands of children across the planet. Founded in 2009 by former Microsoft and Amazon executive David Risher, and Marketing Director at Barcelona’s ESADE Business School Colin McElwee, Worldreader works with manufacturers, local and international publishers, governments, education officials, and local communities to bring books to all.

SutherlandGold Group on behalf of Worldreader