We're set to play a very interesting match between Portugal and Spain, and not just because the place in the final of one of the world's most prestigious tournaments is at stake. There's a curious Barcelona vs. Real Madrid subplot: Cristiano Ronaldo, Fabio Coentrao, and Pepe play for the Portuguese, while Spain relies heavily on Barca players. On the other hand, more Madrid players play for Spain than Portugal, but this aspect gets ignored in the frenzy.

There's another score to settle, though, and it's Cristiano Ronaldo's quest for the Ballon d'Or. Already, the claims are flying in that if Ronaldo manages to help Portugal to a win, or at least a final appearance, the world's best player award (the FIFA Ballon d'Or) should be sealed.

And for some, the fact that he's gotten this far should be enough. That's what former Portugal international Paulo Futre thinks, anyway. "After his goal against Czech Republic, you have to give the Ballon d'Or to him now. He has done more than Lionel Messi, he has broken the balance at the Euros."

But there's a more significant voice that echos a less extreme sentiment, that of Italian legend Paolo Maldini. He opined that Ronaldo "will definitely win it if he goes to the final with Portugal."

But why would the performance of Ronaldo in a competition Messi cannot even compete in prove that he is better? Strangely enough, I basically agree with Cristiano's own assessment of his Euro campaign: "I do not think my displays at the Euros will be decisive to win the Ballon d'Or, but they could help."

Now, Ronaldo is not known for modesty. So take anything he says that is not self-aggrandizing quite seriously. While the Euros are a massively important competition, they are just six matches, at most, out of the whole season.

Six crucial matches, sure, but six matches that Messi does not get to play in because he represents a country in South America and not in Europe. They could help, like any six crucial matches could help. But basing the entirety of a worldwide individual award on a European team competition? That's what some people will say.

Let's assess the four matches out of the six played thus far, then. Against Germany, Ronaldo was OK. He could legitimately complain that Portugal were defensive and thus he lacked service. But he did very little to influence the match and didn't take his chances. FourFourTwo's Stats Zone app "influence" chart showed Ronaldo's name in small letters, indicating he had little of the ball in the match. 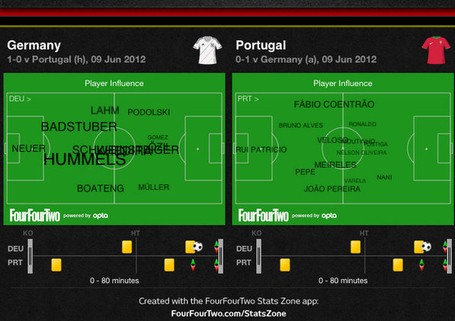 Against Denmark, it was a shock. Ronaldo stayed high up the pitch in hopes of scoring goals, or as ZonalMarking put it, he "was clearly desperate to make an individual impact on the tournament." This resulted in the Danes scoring goals from his undefended flank. Worse, he missed at least two clear-cut chances as the Danes clawed back to 2-2. Silvestre Varela scored a great goal to give Portugal the victory, but it was the worst game Ronaldo had played as far as I can remember.

Versus the Netherlands, it was much better. He bagged a brace, and hit the post a few times. Admittedly, it wasn't a "true" game: Holland needed to win by two goals and went into an all out attack, so their defense was outnumbered. Not only that, but it was woeful as it had been the whole tournament and could not compete.

He scored a timely goal against the Czech Republic, and again one would be right to praise him for that. Yet, the Czechs had been uninspiring in the tournament as well, allowing four goals against Russia (who didn't make it past the group stage.)

To the criticism, Ronaldo sniped at his rival, saying that Messi's Argentina had been eliminated in the group stage of the Copa America. Of course, they weren't, they were actually knocked out by eventual champions Uruguay, but that's not the point, I suppose.

Messi's critics would point to the fact that he did not find the net, and be done with it. That's just lazy: Messi assisted the majority of Argentina's goals as he played in midfield instead of upfront. True, the quality of the teams Argentina faced was dubious as well, so there is some legitimate criticism there.

But crucially, there was never a game in which Argentina scored three goals and Messi didn't do anything. Portugal are a much better functioning team than Argentina are now, and the Argentina of now is an improvement over the confused black hole of a team the albiceleste were in the Copa. Even then, they went out to the eventual champions, with Messi assisting Argentina's lone goal and scoring his penalty in the shootout.

Frankly, Messi had a good Copa campaign. Equally, Ronaldo has been good at the Euros. He has. But he's hardly set the world on fire. He's had two pretty good performances, one shockingly bad one, and a rather forgettable one. Is that truly enough to grant him the title of world's best over Messi?

Whether Portugal win today, whether Ronaldo scores or not, the best player in the world is not determined by one match, or two, or even six. It is not determined by which team collects the most trophies. We will see if this fact is taken into account when the Ballon d'Or is given out next year.