FC Barcelona: How Do You Solve A Problem Like Pivote?

With Seydou Keita having left the club, Barcelona are looking a bit thin at defensive midfield, a sentiment acknowledged by Tito Vilanova in his recent press conference. As much as I despised Keita playing pivote, it goes without saying that something is better than nothing. Sure, he couldn’t pass the ball anywhere near as well as Sergio Busquets, nor could he anchor the midfield particularly effectively and playing as pivote did inhibit his one true strength – surging forward from midfield like a [slightly worse version of] Yaya Toure, but at least he was back-up. Assuming Javier Mascherano is still needed at centre-half, Barcelona only have one pivote in their squad, and while he might just be the best player in the world in his position, he can’t play every match. With that in mind, here are a few ready-made "solutions" for the defensive midfield situation:

Sometimes the most obvious answer is the right one, and the most obvious answer to this problem happens to be Javier Mascherano. His transformation into a world-class defender has been a joy to behold, but prior to that move, El Jefecito was arguably the best defensive midfielder in world football. His partnership with Xabi Alonso at Liverpool was the stuff of legend; each player perfectly complimented the other, one would destroy play, the other would build it. If one went forward, the other stayed back, and it was as a defensive midfielder that Mascherano caught Pep Guardiola’s eye. Whether he was bought as a centre-back rather than a CDM we may never know, but Mascherano is a natural holding midfielder, and almost certainly the most obvious solution to the pivote problem.

Andreu Fontas? As a pivote? Despite spending the majority of last season on the sidelines with a knee injury, we still managed to ascertain that – at present – Andreu Fontas does not have the necessary attributes to play centre-back with the first team. Tactically, he is sound, but sadly that cannot make up for his glaring lack of pace. However, that doesn’t mean we should just give up with him – if anything it means the opposite – we just need to help him improve, or find him a new position. Therein lies the problem, you cannot train pace or acceleration, especially when the player in question has just recovered from a serious knee injury – look to Gabi Milito or even Tomas Rosicky for proof – so if we are to keep Fontas perhaps a Mascherano-esque transformation is in order...

Looking back at the players who have played pivote under Guardiola, a pattern emerges. There is the 191 cm tall Yaya Toure, Sergio Busquets (189cm) and Seydou Keita (183cm). If you include Rafa Marquez (182cm) and perhaps if we want to go even further back than that you could include guys like Edmilson (186cm) or Thiago Motta (187cm); whatever the case, the pattern is clear for all to see. If you wish to play pivote at Barcelona, amongst other things, you would benefit greatly from being at least six foot tall. So, at 186cm, Fontas has one box ticked.

Now, what else do all the above players (aside from Keita) have in common? Considering this is Barcelona, you need to be able to pass the ball well, and most of the players mentioned above were/are superb passers, but I would argue that Fontas is as well and he demonstrated that back in 2010 with a glorious assist for a Pedro goal against Almeria. Not only that, but in his sole La Liga appearance this season he finished the match with 93% passing accuracy, while he completed his sole Champions League appearance with 94% passing accuracy. Given that he used to play as a defensive midfielder, could Tito move Fontas back to pivote? 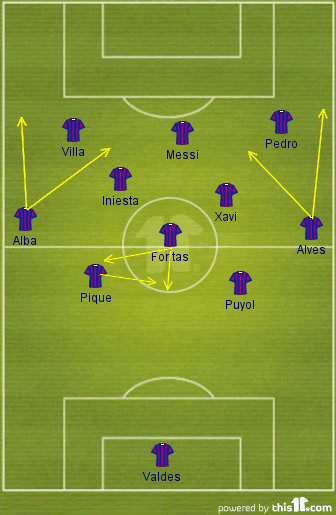 Tactically, Fontas at pivote makes sense. He is strong and tall, but also technically adept – much like Busquets – and as a centre-back, he would be comfortable dropping deeper to form the back-three we saw so often under Guardiola. As a left-footer, Fontas could provide a natural balance to that back three and could also cover for Alba if necessary having operated at full-back before.

Despite Spain winning the tournament, and despite Andrés Iniesta winning the prize for player of the tournament, Euro 2012 was fantastic for Andrea Pirlo. Anyone who watched Juventus last season (or even held a passing interest in football) would have known that Pirlo’s career was far from over, but it was one thing to dominate the Serie A, it’s another to dominate on the world stage. The Italian was utterly fabulous, playing the game at his own pace, dictating the tempo of virtually all the matches he played in (aside from the final), but most importantly he showed that a holding midfielder does not need to be able to destroy play. Could Cesc Fàbregas take up a similar role for Barcelona?

Given the protracted nature of his transfer, no-one really looked into the Fàbregas transfer in terms of its tactical ramifications. It was all about accommodating Cesc in the position he played for Arsenal, almost as if it was assumed he couldn’t play any other position. Furthermore, at a price of around €30 million, Cesc is too expensive to sit on the bench, but on the other hand, he isn’t necessarily better than Xavi or Andrés Iniesta, so to get the minutes his transfer fee (and ability) requires he has had to take up new positions. He excelled in the early part of the season as a false #9, working beautifully alongside Lionel Messi to form a deadly attacking duo. As the season progressed, and perhaps as Cesc became more and more jaded, he dropped deeper into midfield (although this is in contrast to his elevation to the CF position at the European Championships), so could pivote be a natural progression for Fàbregas?

There were times under Frank Rijkaard when Barcelona operated without a defensive midfielder, and although the tactic was not particularly solid from a defensive standpoint, it did allow Rijkaard to choose his strongest possible midfield of Deco, Xavi and Andrés Iniesta. Now, if the current Barcelona are playing without Busquets, it is usually in a match against a "lesser" opposition, so is there really a need to play a midfield anchor? For example, if the Blaugrana are at home to a relegation candidate, what exactly can the pivote do? There is next to no attacking play to destroy making that player almost a spectator. Would that valuable position be put to better use if that midfielder merely pushed forward to form a "flat" midfield trio? 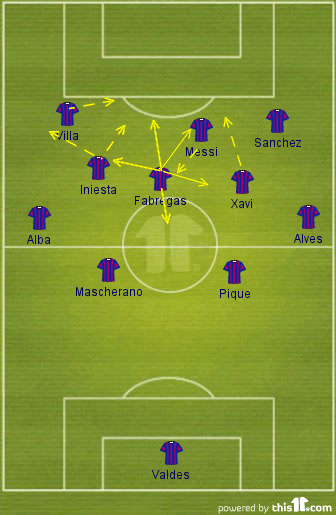 In my hypothetical diagram above, Cesc Fàbregas is the third man in the midfield, although it could just as easily be Thiago Alcântara, JDS, Sergi Roberto or anyone really. As the third man in a midfield that usually consists of two, Fàbregas (or Thiago etc) would bring flexibility, fluidity and simplistically, an extra body against the sheer number of defenders opposition teams often employ against the Blaugrana. While it is true that Barcelona were over-dependant on Leo Messi, they were hampered at times by their tactical rigidity, something the third man could rectify. The third man could still drop deeper if required, although he would come into his own on the offensive side of things. He could swap positions with the other two midfielders, in order to liberate them, and overload the opposition defense. For example, if the third man moves left to cover for (in this case) Iniesta, Andrés could drift out wide. Coupled with Jordi Alba’s attacking runs and a left-winger (in this case) David Villa, Barca would have three attackers, possibly against one defender. Villa would be free to cut inside, Messi could drop deeper to escape his marker, Xavi could push forward; the possibilities are endless and Barcelona all of a sudden looks more dangerous; more unpredictable. The usual positioning of the midfield trio would almost be picked up and moved further forward, the pivote becomes a central midfielder, while the two usual central midfielders become attacking midfielders – auxiliary #10’s.

These are just four ideas, all of which would not require any signings to be made. Have you got a solution that I haven't touched upon? Comment below with your ideas about the "pivote problem". Also, stay tuned for a second part to this article where I look at a few potential signings the Blaugrana could make to alleviate this issue.