FC Barcelona: The Impact of Villa

Share All sharing options for: FC Barcelona: The Impact of Villa

The sight of David Villa returning to training last week was a huge uplift for all Barça fans. El Guaje missed the second half of the season after breaking his tibia in the Club World Cup last December and his impact was sorely missed by the Catalans.

With an out of sorts Pedro, new arrival Alexis Sánchez and youngsters Cristian Tello and Isaac Cuenca all needing time to bed in, Barça needed Villa last season. The number 7 provides much needed width to the game and has a deadly, pinpoint accurate shot. He is also one of those rare players who seem to be able to score from anywhere. Take these two world class goals for example. The first coming against Real Madrid in the Supercopa de España and the second against Honduras whilst appearing for Spain in the 2010 World Cup.

The first shows the superb technique he possesses. The curve on the ball leaves a world class goalkeeper such as Casillas unable to get near the ball. Also look at the build up to the goal, Villa darts towards the penalty area where he is met by compatriot Sergio Ramos. Ramos is afraid of making a challenge because of Villa's quick feet and that he is dangerously close to the penalty area.

So wary of a conceding a penalty he tries to show Villa the outside and this is the special part. Villa fakes to go down the wing but with such quick speed cuts inside, leaving Ramos completely wrong-footed, allowing the striker that extra yard he needed to bend the ball up and and around the goalkeeper. A sublime bit of skill that earned his side the equalising goal.

The second clip best shows Villa's spontaneity. The Spanish striker skips past two Honduras defenders as he makes his way into the penalty area, again coming from the left side to allow a shot with his favoured right foot (Villa is ambidextrous but still stronger on the right), he is then in a near identical situation to that of the Madrid goal. The defender, Wilmer Crisanto, tries to force Villa outside by positioning his body that direction but he is left wrong-footed by Villa's skill as he cuts back in.

At this point he has the extra yard he needs to function, but nearly everyone is expecting a pass back to Xavi, who is now screaming for the ball just inside the area. Xavi looks the more logical choice, Crisanto is starting to regain ground and another defender is approaching, as Xavi is left unmarked with a clear sight of goal. But Villa, almost out of nowhere curls, this time in the opposite direction to the Madrid goal. By doing this he has ensured the ball does not strike the approaching defender, but also that the goalkeeper is unable to get a glove to the all. A majestic goal that sprung out of nowhere.

Just two highlights of the extraordinary talent Villa holds. While these two clips proves the player can perform on the big stage, the number 7 is also consistent.

If we look at his first season at Barça, he started 63 games in all competitions scoring 34 goals in the process. That gives him a ratio of roughly 0.54 goals per game, sure it's not on the Messi scale but it is still very impressive. To put it into perspective, during the same season Mesut Özil averaged a 0.2 ratio as did Ángel Di María. Both players play in a similar role as Villa but both have vastly lower goal ratios.

Last season Villa beat that ratio. Before his injury, the Spaniard had scored 18 goals in 32 starts, giving him a ratio of 0.56 goals per game. If he continued in that vain the striker would have overtaken his 34 goal tally of the season before and would have produced his second highest goal tally per season, behind his stunning 08-09 season where he hit 49 goals in 57 starts with Spain and Valencia.

Not only does Villa score goals he also affects the game with his movement. Sid Lowe, the Guardian sports writer, summed it up best. I asked him about Villa's impact for Spain and he said Villa is not an out and out striker but favours to move to the left. 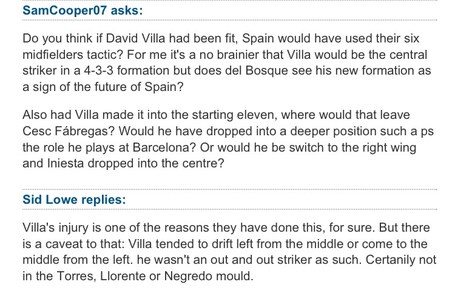 A quality, I think, that has been enhanced since his switch to the Catalans. Unlike at Valencia, Villa isn't the main striker, Messi is. So for him to retain a first team spot he had to adapt to a new position. His pace, technique and experience have all helped him to solidify that left wing spot by providing a much needed width.

Take this situation for example. Xavi is on the ball, playing 1-2s with Iniesta as Messi looks to receive the pass. Problem is both centre backs have doubled up on Messi meaning, as skilled as he is, he will find it difficult to carve out any chance. But moving away from the cluttered centre, Villa is lurking towards the touch line. Desperate for the chance to run at goal, Xavi spots Villa and distributes the ball.

At this stage the defence is stretched, the left back is aware of Villa but also wary of the space left behind the charging centre backs. So he is left in a no mans land. Not adequately marking Villa but also not covering the space in behind. This means when Villa does receive the ball he sprints towards the open space, the defender is wrong-footed allowing Villa much more space then is safely allowed. The two centre backs now panic and rush to aid the flailing full back, freeing Messi in the process.

An attack that would have been nowhere near as effective without Villa.

A big match player, unselfish, smart, quick, technically excellent, has a great touch, great vision and a natural ability to predict the play. Barcelona are lucky to have the striker within their squad and rumours of his departure must be quashed immediately. Guardiola was a strong supporter of the top scorer for the Spanish national side and I hope Vilanova shares the opinion.

As I write this @barcastuff has just tweeted:

"Official: David Villa, who broke his shinbone in December, has today been given the medical green light #fcblive"

Not a moment too soon in my opinion.