Day and night. Good and evil. Barcelona and Real Madrid. Contrast is the name of the game, and I do believe we have found a winner. Have there ever been two clubs that operate such stark contrast to one another? What started out as a rivalry has escalated to a war in recent seasons; El Clasico is no longer just a game of football. There are no neutrals: you’re either with us or you’re against us – after all, how can there be objectivity in this world of extremes? Even the conduct of each club over this summer break contrasts the other.

According to some, the summer break has brought little in the way of change for either of Spain’s top two clubs – Barcelona (despite a managerial change and two new signings) are perceived to be the same as ever, while Real Madrid have quite literally done nothing. With the signing of Luka Modric still not completed, Madrid have the same squad as last season – which at the time was being heralded as the "best in world football". However, can we say the same again this season? Sure, no key figures have left the club yet, but the rumoured departures of Nuri Sahin, Ricardo Carvalho and Kaka will affect the club – if they are completed. Perhaps in a bid to draw attention away from their own deficiencies, many Real Madrid supporters insist that Barcelona are the same under Tito Vilanova as they were under Pep Guardiola. Once again, the Devil is in the details.

Under Pep Guardiola, Barcelona operated out of a 4-3-3 system in which Carles Puyol marshalled the defense; Xavi controlled the midfield and Lionel Messi lead the line and if Sunday’s win over Real Sociedad is anything to go by, the same can be said of Tito Vilanova’s Barcelona. But is it really that straight-forward? On paper, each team does line-up in a 4-3-3, but neither side sticks rigidly to that formation once a match starts. For Guardiola, the 4-3-3 became a 3-4-3, and sometimes, there was no 4-3-3 to begin with – see the last Clasico for an example. Then we have Barca under Tito Vilanova; it’s 4-3-3 on paper, but once the match begins, it becomes something else altogether. 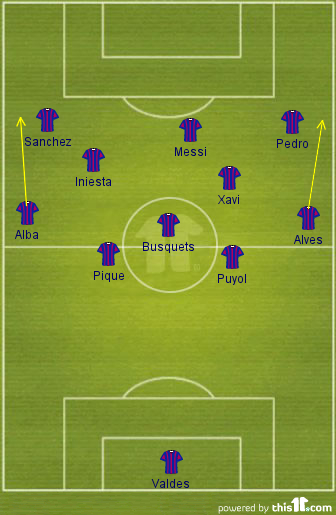 Taking Guardiola’s 3-4-3 one step further, Barcelona (so far) under Tito Vilanova have often found themselves in a 2-3-2-3 formation similar to the one created by Vittorio Pozzo back in the early 1930s. In fact, comparing the style of Barcelona’s performance on Sunday and Pozzo’s Italy team makes for interesting reading – in Pozzo’s sides, one of the two defenders would be responsible for marking the opposing centre-forward – a stopper if you will – (Mascherano/Puyol?) while the other played as a libero of sorts, covering his colleague and building the attacks (Piqué?). The two full-backs are positioned to support the midfield and were given the task of controlling the wings (something Alba and Alves contributed to) while the central midfielder (Busquets) operated as a regista. One of the few clear differences between the two systems is that Pozzo played with two inside forwards, and while Barcelona played with two inside forwards, one of those two was Lionel Messi, who would have played a more traditional centre-forward role in Pozzo’s system. Not only that, but in Xavi they had a combination of a regista and an inside-forward.

The benefits of the formation remain the same to this day as well, as the 2-3-2-3 creates superiority in midfield, both numerically and statistically in terms of possession. The 2-3-2-3 also allows for a quicker tempo of play, especially on the counter-attack. Little has changed on the surface, but if Jose looks closer, he will see that everything has changed. He has never faced a Barcelona side coached by Tito Vilanova, but Tito Vilanova has faced a Real Madrid side coached by Jose Mourinho. The players have faced Jose Mourinho’s Real Madrid many times before, they know their collective strengths, they know their collective weaknesses; Real Madrid however, can only rely on their knowledge of the individuals, for the collective has changed. Even before a ball has been kicked, this is what gives Barcelona the advantage headed into Thursday’s clash, but they need to ensure that they hammer home this advantage and here’s how they can do it.

One thing that strikes me as odd, purely from a neutral perspective, is how Real Madrid have not strengthened in defense. Granted, Pepe and Sergio Ramos are an excellent pairing in the centre of defense, but in the biggest games, it has been their full-backs who have let them down. Marcelo is a great attacking option, but is inept defensively, and similar can be said of Fabio Coentrao. Alvaro Arbeloa on the other hand is simply not of a good enough standard to start for a club of Real Madrid’s stature, especially with Ramos in the squad. Lukas Piszczek was heavily linked with a move to the Spanish capital, but it appears as though Jose Mourinho is content with his options on either side of defense, a decision he could live to regret. 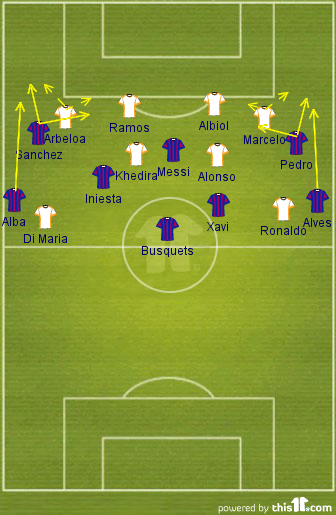 Angel Di Maria and Cristiano Ronaldo are great wingers, but neither are particularly fond of tracking back. Jordi Alba and Dani Alves on the other hand are full-backs who love to get forward and this should create a numerical advantage in Barcelona’s favour. With Alves and Alba on the overlap, Barcelona have created a catch-22 situation for the Real Madrid defense. If Alexis Sanchez or Pedro cut inside and the full-back follows them, then there will be space on the touchline for either full-back to exploit. If they cover the overlapping run, they there will be space for either winger to exploit, which in turn could force one of the centre-halves out of position (for Messi to take advantage of). If both the winger and the full-back drift out wide, then the RM full-back will be outnumbered, until one of his teammates drifts out of position to help.

Then, from this point onwards, Real Madrid have shown in the past that they have difficultly defending in this situation. They have conceded goals due to cut-backs (Arouna Kone in Levante’s 1-0 win last season, Messi’s winner in last season’s Supercup) and they have conceded when the ball has been simply squared into the area (Mario Gomez in Bayern’s 2-1 win last season, Messi’s first in the Champions League semi-final). Given how many chances and indeed goals (Messi's second and Pedro's volley) Barcelona created with crosses on Sunday, Real need to beware.

Here’s a quick diagram to explain what I mean (arrows indicate the run, the dotted line represents the pass), followed by a few videos. Given that Pepe is out injured, and therefore Raul Albiol is likely to fill in at centre-back on the same side as Marcelo, this should be a tactic that Barcelona attempt with great regularity tomorrow evening. 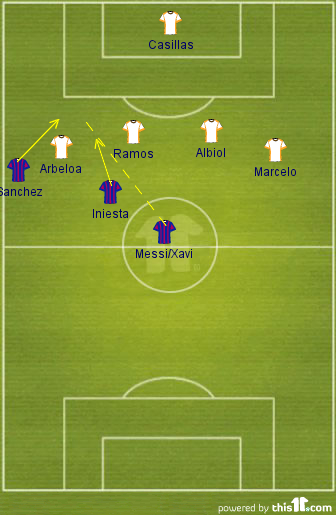 It was the first goal in the infamous Manita victory back in November 2010, and it was all possible thanks to Iniesta’s magical pass between Ricardo Carvalho and Marcelo.

Arguably the most eye-catching of the five goals on that fateful night, Villa’s second against Real Madrid came after a raking pass between Sergio Ramos and Pepe from Lionel Messi.

Abidal’s goal against Real Madrid in last season’s Copa Del Rey was assisted by a lobbed through ball angled between Ricardo Carvalho and Hamit Altintop.

Another assist for Messi, as he stabbed the ball between Pepe and Alvaro Arbeloa to set-up Pedro’s goal in last season’s Copa Del Rey clash.

Essentially, what I’m trying to get at is that Real Madrid are beatable, and given their slight change in approach under Tito Vilanova, Barcelona are the unknown quantity. Given that the Blaugrana have only lost one of the past eight Clasicos anyway, that should make them the favourites to retain their Spanish Supercup title.