Last Thursday’s win over Real Madrid at the Camp Nou was historic for a number of reasons. Firstly, it was Barcelona’s first Clasico victory under Tito Vilanova, and secondly it was their 87th competitive win against Los Blancos, drawing them level with Jose Mourinho’s side who – over the course of history – have also amassed 87 competitive wins against the Blaugrana. On paper, the 3-2 score-line allows Real Madrid a little room for manoeuvre, but looking at the form book, Barcelona must be considered overwhelming favourites. They haven’t lost at the Bernabeu in four years, or seven games, a sequence of results that includes the famous 2-6 in Pep Guardiola’s first season in charge, and two consecutive wins in his final season. Even the signing of Luka Modric is unlikely to mask that fact.

Speaking of the Croatian, there are murmurs from the Spanish capital that he may be thrown in at the deep-end and feature tomorrow. Personally, I think Luka will have to wait until Sunday and Granada to make his debut, but it’s one of many unknown elements that Tito Vilanova will have to think about. In my last tactical analysis I mentioned how Barcelona had the element of surprise in the last Clasico, so before I get to tomorrow’s match, let’s first take a look at a couple of observations from last week’s 3-2 win at the Camp Nou.

As Barcelona fans, we all know about the ability that Sergio Busquets possesses, his importance to the system, and crucially, how underrated he is. Ask any opposition fan who the most important player is in Barcelona’s system, and in some order their top three will likely consist of Lionel Messi, Xavi and Andrés Iniesta. Extend that to a top five, and most people would add Carles Puyol and Dani Alves with Busquets not even getting a look in, but in truth, Sergio Busquets is just as important to the team as an individual like Xavi or Andrés Iniesta. Perhaps not as eye-catching, but crucial nonetheless and Thursday’s win was proof of that.

Operating as pivote (as usual), it appeared as though Sergio Busquets had been given license to roam from his position, and he did so to great effect, especially from a defensive standpoint. Perhaps Tito Vilanova paid close attention to Real Madrid’s opening day draw with Valencia, or to last season’s defeat against Levante; maybe he assessed Barcelona’s weaknesses from last season’s Clasicos, whatever the case, he pinpointed Sergio Busquets as one of, if not the most important player on the field. 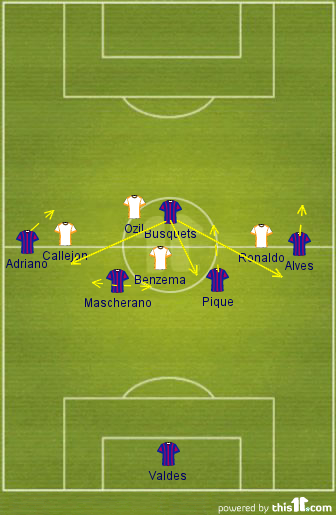 Busquets was sent out as the pivote, but at one point or another, he covered every defensive position to cover for his teammates. When Alves surged forward, there were times when Busquets would drop into that gap to cover Cristiano Ronaldo, although more often than not, Gerard Piqué was the one who would move across to cover his former Manchester United teammate, so Busquets found himself covering at centre-half. In addition to this, Busquets performed his usual role, dropping back to form a back-three on the rare occasions that both Alves and Adriano pushed forward. Even if it seems trivial – a defensive midfielder is often required to cover for his defensive teammates after all – it made a huge difference to Barcelona’s mentality and allowed Javier Mascherano freedom to roam forward, something he did to excellent effect for Barcelona’s equaliser.

However, it wasn’t only at the defensive end where Sergio Busquets made a difference; drifting forward a little more than usual, Busquets was a key figure in a number of Barcelona attacks.

Busi and Xavi interchanged positions a number of times on Thursday, which allowed Xavi a little more time and space when in possession – which is always a good thing. Furthermore, when Busquets goes forward, he gives the Blaugrana a physical presence and on Thursday, Busquets utilised his frame to good effect. Note how often Busquets would stand tall when faced with a challenge, and also note how often he moves the ball on with a single touch. One of Busquets’ greatest assets is his technique, but also his work-rate, he never stops moving, never stops looking for space to receive the pass. Whether it was because they under-estimated his influence, or simply because he is on another level, Busquets dominated Real Madrid.

In the immediate aftermath to last week’s clash, there were many who were unhappy with Lionel Messi’s performance. He may have scored, but "he should have scored more" was the mantra of his detractors. Where was the goal from open play? Why wasn’t he laying on goals for his teammates? Well, the answer is simple – Messi had a new role. 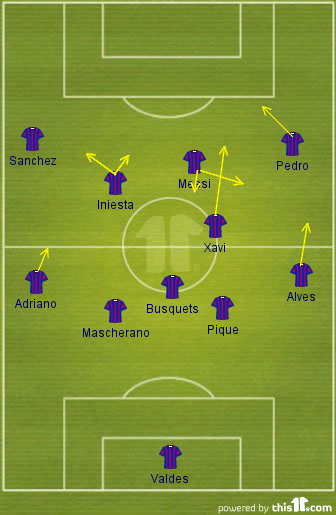 Real Madrid defended well, and having learnt from previous mistakes (the Manita), they chose to operate with a deeper defensive line, and as a result, Barcelona had trouble creating clear-cut chances. Usually, this is where a false #9 is useful as against a typical striker. As the false #9 operates three-quarters of the way up the pitch, the two opposing centre-halves do not have anyone to mark, and usually find themselves positioned higher up the field as a result. However, Sergio Ramos and Real Madrid have played against Lionel Messi before. They know his strengths, they know how he likes to play and having been caught out before, they also know how to defend him.

Naturally, a player of Messi’s quality can still create chances, and will continue to make a nuisance if himself, no matter the situation. He found space on Thursday, most notably for his uncharacteristic miss inside the penalty area, but for the most part Messi was creating space for his teammates by dropping deep in an attempt at luring the Real Madrid defense forward, including the two holding midfielders – Sami Khedira and Xabi Alonso.

Watch Pedro’s equaliser again, and a few things stand out. Look at Sergio Busquets for example. Watch as he notices that Javier Mascherano is moving forward with the ball, and then how he steps back to allow him a fraction more space to play the pass. Also notice Lionel Messi’s positioning when Mascherano made the pass, Messi is in a central midfield role while Xavi occupies the false #9 position. And then finally, notice Xavi’s movement, dropping deeper right before the pass is made to force Sergio Ramos out of position.

Similar happens for Xavi’s goal as Messi is again found in the middle of the field, with Iniesta and Xavi pushing forward to great effect. Busquets provides Iniesta with a fabulous pass because he possesses enough skill and vision to wreak havoc when pressed by the opposition.

It’s a system that doesn’t necessarily get the best out of Lionel Messi, but it possesses as much of an offensive threat as the 3-4-3 did last season, just without the defensive instability. It is also a system that would get the very best out of Cesc Fàbregas, and as we saw on Thursday, the system lends itself to wingers that boast a goal threat. Pedro was excellent on the right-hand side; could David Villa do similar on the left-flank? And what about the future? Neymar would be a potent threat either on the left or through the middle...

Regardless, with respect to tomorrow’s match, my advice has not changed. In signing Luka Modric, Real Madrid have ignored their defensive frailties and Barcelona will continue to benefit. Through balls between the full-back and centre-half continue to exploit Madrid’s horrendous positional play – take a look at the two goals above again; Pedro’s goal comes courtesy of a lobbed through ball between Ramos and Coentrao, while Iniesta threads a pass through to Xavi, in-between Khedira (covering at CB) and Coentrao.

Real also looked panicked whenever Barcelona entered the penalty area as well, and as a result, they couldn’t defend low crosses. Alves in particular benefitted from Real’s shoddy defending, creating one glorious chance for Messi before nearly scoring himself.

Real Madrid have started the season slowly, and have now gone three games without a win. Expect the crowd to be anxious, and most importantly volatile. This is a unique opportunity for Barcelona; yes, it is only the Supercopa, but if they make it four matches without a win for Real and lift that trophy on the sacred turf of the Santiago Bernabeu with the Cant Del Barca blaring out of the stadium’s loudspeakers it might just be one more nail in Jose Mourinho’s coffin...