Let’s be honest, it can be hard to get excited for pre-season friendlies. Much like international breaks, we often see our favourite players jetting half-way round the world, only to play for a fraction of the game, and at a fraction of the intensity, all to make the organisers that little bit richer. However, it’s not all bad. Pre-season is also a chance to see new faces, to gauge expectations for the coming season, and on occasions, there are matches that just look interesting. Barcelona’s match against PSG is certainly one of them. It’s a glamour friendly, between two of the best clubs in World Football, but it’s also a clash of styles. In one corner we have the "home-grown" success of Barcelona, and in the other we have the noveau-riche free-spenders, Paris Saint Germain. One team is led by a "rookie", the other by a decorated veteran; I’m sure you get the picture. With the standard preview coming later on today, here’s a look at the tactical side of things, and a few "keys to victory".

Despite spending upwards of €80 million this summer alone, PSG still look a little weak at full-back. Maxwell is a good player, especially in Ligue Un, but he shouldn’t be starting for a side that is looking to challenge for the UEFA Champions League, while much of the same can be said of right-back Christophe Jallet. With Barcelona looking particularly potent down either flank in the early stages of pre-season, the Blaugrana should be looking to play it wide with every opportunity they get. 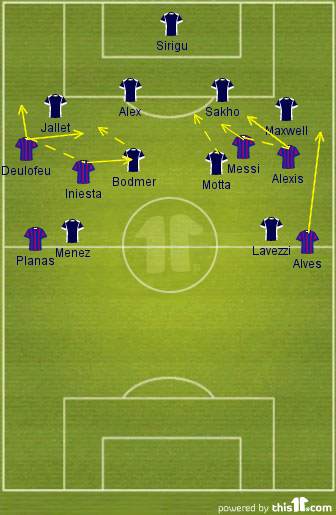 In this mock-up, Barcelona are playing with a front-three of Alexis Sanchez, Lionel Messi and Gerard Deulofeu, although given Ibrahim Afellay’s form, and the return of Pedro and Cristian Tello, Deulofeu is arguably the least likely to start. That being said, the role he takes on in my hypothetical scenario could easily be done by any of the replacements. Focusing on the left-side of defense first, Barca’s primary aim down the right-hand side of attack should not be to isolate Maxwell, but to isolate the left centre-back – in this case Mamadou Sakho.

Unlike La Masia graduates Isaac Cuenca and Cristian Tello, Alexis Sanchez isn’t a typical old-fashioned winger, especially when he is positioned on the right-side of attack. He is capable of stretching the play, hugging the touchline and crossing the ball, but his strengths lie elsewhere, with the stereotypical wing-play being Alves’ responsibility. Instead, what Tito will want from Alexis is that he runs with the ball often and straight at the heart of defense at this is what causes the most problems for opposing defenders. Furthermore, it also opens up space for Dani Alves, and more importantly, for Lionel Messi.

So, with this in mind, I would like to see Alexis run directly at Mamadou Sakho every chance he gets. In the best case scenario, Sakho is unable to deal with his combination of pace, power and trickery, but before Alexis can run at Sakho, two things will have to happen. Firstly, Alves needs to get forward so that Maxwell has to make a decision. Does he follow Alexis and leave Alves wide open on the wing or does he cover Alves’ run and leave Sakho one-on-one with Alexis? Either way, Barcelona have options. Secondly, Messi needs to be in close vicinity to the attack. If he is, then he could drift out wide instead of Alves, potentially finding space if Maxwell continues to track Alexis, or he could also make a diagonal run similar to Alexis in an attempt to create a two-on-one situation against Sakho (if he can get away from Thiago Motta that is).

Now, turning attention to the right-hand side of defense, and Gerard Deulofeu (or whoever starts left-wing) can, and likely will play a more old-fashioned game out wide. With Adriano officially ruled out of the match and with Jordi Alba on holiday until the Manchester United game, Barcelona are likely to start Carles Planas at left-back, meaning that before the match has started, the Blaugrana have lost one of their attacking options. Planas, given his inexperience at the top level and Alves’ presence on the opposite flank, should play a more defensive game. All this could be rendered irrelevant of course if Martin Montoya fills in on the left.

Regardless, Deulofeu (who gets my vote after his solid, if not spectacular, showings against Hamburg and Raja Club Athletic) should be sent out with orders to isolate Jallet – by any means necessary. Jallet isn’t the quickest, nor is he the best defender, so Deulofeu’s trickery could expose his weaknesses. If Deulofeu wishes to utilise his pace advantage, he would drive down the flank towards the byline and look for a cross, or if he wishes to take on his man, he would try and cut inside for a shot, or to open up space for Iniesta (or maybe Cesc Fàbregas) who could operate in a similar role to Messi.

For example, if Deulofeu cuts inside from the left and Mathieu Bodmer drops back to try and win back possession, then Iniesta would find space in the centre, or if Alex is the one to close down Deulofeu then Messi could find space with a diagonal run (as Afellay did for the fourth goal against Raja).

Prior to the announcement that Pastore was to join PSG back in 2011; the speculation was rife as to where the Argentine midfielder would end up. Chelsea, Real Madrid and Inter Milan were all rumoured to be interested, making it somewhat of a surprise that Pastore ended up moving to France. However, since arriving in Paris, Pastore has wasted no time, firmly establishing himself as one of the best players in the league – perhaps as the best now that Eden Hazard has left for Chelsea. Contributing 16 goals and 7 assists in your debut season in a new league is a good return for any player, and with a year of experience under his belt, much is expected of the 23 year-old. Indeed, Pastore looks set to deliver, at least if his pre-season performances are anything to go by –Javier was one of the best players on the pitch in PSG’s recent match with Chelsea. Facing Barcelona has never been easy for opposing midfielders for obvious reasons, but Pastore has the attributes required to still impose himself on the game – and naturally, Barca need to make sure that this doesn’t happen. Usually, that’s a job for the defensive midfielder, but to send Busquets out with a man-marking job on Pastore would be thoroughly wasteful and could have a detrimental effect on our possession stats – a highly unwanted scenario.

We can assume that PSG are going to line-up in a 4-2-3-1. Carlo Ancelotti has always insisted that his teams play 4-3-3, but in reality, it’s always a 4-2-3-1, or if he’s feeling adventurous, a 4-2-1-3. Regardless, Pastore should find himself positioned in the hole, just behind the main striker with two wingers in support, but how can Barcelona defend Pastore without sacrificing Sergio Busquets? 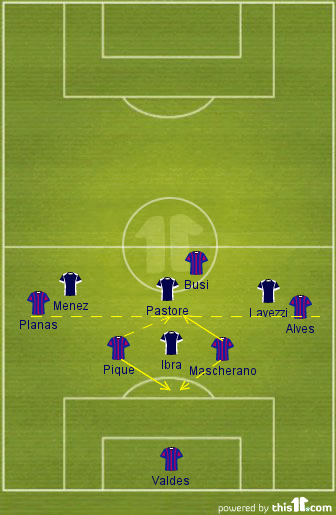 Ladies and gentleman, I present to you a variation on Karl Rappan’s verrou. Straying off-topic for just a second, some people suggest that anti-football doesn’t just encapsulate defensive football, but that it also includes possession football, the likes of which has been made famous by Barcelona and Spain over the past few seasons. So, what would happen if you combined the two? Tiki-taka and Catenaccio? Well, this is where the verrou comes in. In an attempt to nullify Javier Pastore without Sergio Busquets, one of the centre-backs (preferably Mascherano due to his previous experience as a midfield destroyer) will move forward to close down Pastore, while the other centre-half (Gerard Piqué) will drop deeper to compensate for the movement of his partner. What was initially a "flat back-four" becomes a libero with a back-three ahead of him – which conveniently doubles up as a way to man-mark each (offensive) member of the 4-2-3-1 employed by PSG. Considering the number of teams who play 4-2-3-1, it could be a worthwhile experiment for Tito, although it’s highly unlikely to have even crossed his mind.

Give Xavi time on the ball

I’ll admit it’s an obvious one, but nevertheless, if Barcelona can engineer time and space on the ball for Xavi, then the match will become a whole lot easier. Following on from the first point especially, and a little from the second, Barcelona have what it takes to create a huge pocket of space in the middle of the field. The back-four and double-pivot (likely to be Bodmer and Motta) will be hesitant to get forward given Barcelona’s potent attacking threat and I have a hunch that Ezequiel Lavezzi will be given orders to stay forward on the left in an attempt to curb Alves’s offensive instincts. Jeremy Menez and Pastore are both fairly lethargic players when it comes to tracking back, while Zlatan Ibrahimovic famously covered less distance than Victor Valdés during a vital Champions League match. Unless the full-backs are brave (stupid?) enough to surge forward at every opportunity, PSG could find it difficult to bridge the gap between defense and attack.

So, if Andrés Iniesta and Lionel Messi can keep the double-pivot occupied (purely by staying forward), then it would be solely down to the full-backs, or to Pastore – which would force the Argentine to drop deeper than he would wish – to act as the bridge between attack and defense. If the full-backs take up the mantle, then Alexis Sanchez and Pedro would be the logical choices to track back to cover their runs, ideally leaving Xavi with a pocket of space in the middle of the field in which to work his magic. 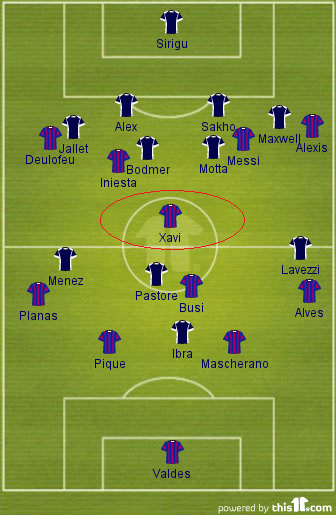 But that’s enough of my suggestions, what do you think Barcelona need to do to ensure victory against PSG tomorrow evening?