Ah, the perils of an international break. Headed into the break, Barcelona had nine points from nine in the league, and with the exception of Carles Puyol they had managed to get through a few weeks of competitive football without any new injuries. Eric Abidal and Isaac Cuenca are still sidelined, but their status has not changed since the end of last season, so we can leave them out of this discussion. However, upon returning from the international break, Barcelona have found that – through no fault of their own – they will be without Andrés Iniesta, Jordi Alba and Alexis Sanchez for tomorrow’s trip to Madrid where the Blaugrana will put their 100% record on the line against Getafe.

The situation must be infuriating for Tito Vilanova, especially as Getafe are arguably the biggest threat to that 100% record. After all, this is the team that defeated Real Madrid in Jornada Two and while we took great joy in poking fun at Real Madrid for their misfortune, lest we forget that Luis Garcia masterminded a 1-0 win in the corresponding fixture of last season. The fixture itself has always been tough, but when you factor in the supposed FIFA virus, injuries and Vilanova’s relative inexperience as a coach, the task at hand takes on a far greater magnitude. Taking all those factors into consideration, here are a couple of tactical possibilities for the match tomorrow. 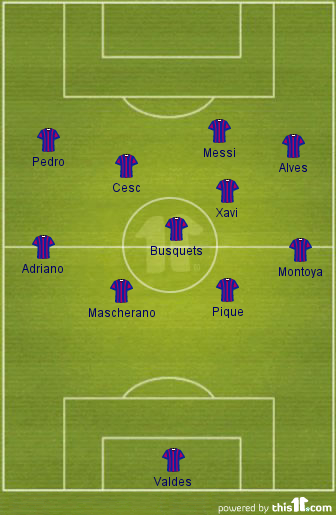 It’s a tactic that very few people enjoy, and a tactic that fewer would implement themselves given the choice, but given the current situation, it makes perfect sense for tomorrow’s match. The Blaugrana have claimed nine points from their opening three games, but their performance in the solitary away fixture against Osasuna was sluggish and the Catalans were fortunate to claim the win. A victory is a victory in football; that three points obviously holds the same value as any other win; does that make the performance any more acceptable?

Last season we witnessed multiple instances of performances similar to the 90 minutes seen against Osasuna and many of them ended without a win, such as last November’s clash with Getafe. First Barcelona need to assess what their weaknesses are in relation to performances at the Camp Nou, and only then can they attempt to take action to rectify those weaknesses.

So, what exactly is different when Barcelona travel away from home? Well, the most obvious statistic is that Barcelona find it more difficult to score away from home. Last season, Barca scored 114 goals in the league last season, and of those 114, only 41 goals came away from home. That still works out at over two goals per game, but compare that figure to the astronomical, almost unbelievable average of 3.8 goals in home league matches and it’s clear to see there is a fundamental issue. Is it that Lionel Messi has less space to work with away from home and suffers as a result? Does he simply "bottle" it when playing away from home? There are many "reasons", but I would argue that it is the former that makes the most difference.

It’s inescapable that Messi will – on very rare occasions – have an off-day. His position is not that of a typical #9, so unlike players like Falcao, or heading into the past, Ronaldo or Shevchenko, it is tougher for him to "just score" in a match. If a cross comes into the area, he will have to move to receive that cross while players like Falcao will already be there. It’s part of the reason why Messi is difficult to defend, but it can be a hindrance. Often we have watched as Messi has dropped deeper and deeper in an effort to involve himself in a match, and as a general rule of thumb, the deeper Messi’s average position is in an away game, the less likely it is that Barcelona win that match.

So, if Messi dropping deep is a problem for Barcelona away from home, one of the solutions could be pushing Dani Alves further forward. The understanding between the pairing is well-documented; in a sense; it would be a "back to basics" move to benefit Messi. There would be no need for him to drop deep solely to link-up with Alves, and ideally, the closer he is to goal, the more likely he is to score...

In his latest post, Luis looked at the 4-2-3-1 as a "Plan B" and one of the key reasons behind that was its defensive stability. Barcelona did struggle to score away from home last season, but that wouldn’t matter if Barca could keep clean sheets. Last season, Barcelona boasted a win percentage of 73.4%, but when they kept a clean sheet, that win percentage improved to 89%. Maybe Barcelona would win more matches if they signed a new striker such as Falcao, but it’s more likely that they will win more matches if they sort out their defensive frailties. Alves at right-wing may not solve anything offensively, but if it keeps the opposition out at the other end, then I am all for it.

The stand-out news this afternoon was that Gerard Deulofeu had been called up to the senior squad for tomorrow’s match. He’s only one member of a 19 man squad that will be cut to 18, but it would be awfully redundant for Tito to call up Deulofeu – therefore keeping him from playing for the B team – only to leave him on the bench. However, can he "afford" to start him? What if Barcelona were to lose? Deulofeu is often accused of playing in a selfish manner, and constantly berated for naming Cristiano Ronaldo as one of his idols; in other words, he would make the perfect scapegoat.

Jordi Mestre noted that the club cannot make the same mistakes with Deulofeu as they did with Bojan, so this is a bold move from Vilanova. Is Deulofeu ready or is this just a distraction for Luis Garcia to contend with? Whatever the case, Deulofeu would be a better option than Cristian Tello. Getafe are likely to "park the bus" so to speak, giving Tello little room to pull off his usual "kick-and-rush" tactics; this match requires a little more finesse and Gerard has that in abundance. Some say arrogant, I prefer to think of it as confidence in his own abilities and football is as much a psychological game as it is about skill. Whether he sees game-time or not, Deulofeu is in form and that always makes for a good option off the bench.