FC Barcelona: 2013 in Review: The Statistics

With 2014 upon us, it's time to take a look back at 2013, recapping some of the best moments of the calendar year, starting with this statistical review

Share All sharing options for: FC Barcelona: 2013 in Review: The Statistics

Despite claiming their 22nd La Liga title in record-equalling fashion, 2013 is unlikely to go down in history as the greatest calendar year in FC Barcelona’s illustrious history. Aside from the obvious disappointments on the field, there were countless setbacks off the pitch as well – as illness ended the Barcelona careers of two individuals: then head coach, Tito Vilanova and French defender Eric Abidal.

However, 2013 was not without its positives – Barcelona finally secured the signing of Brazilian superstar, Neymar and the Blaugrana ended the year on top of La Liga under the guidance of their new manager, Argentine tactician Gerardo Martino. All in all, the club managed to achieve modest success and build themselves a solid platform for 2014 – that’s more than Real Madrid can boast for instance.

Over the next couple of days, Barça Blaugranes will review some of the best moments of 2013, starting with this statistical review of the calendar year.

At the end of the day, only one thing matters in football and that’s the final result. Statistics like possession, shots and tackles usually paint a vivid picture about the flow of a particular match, but they are meaningless without the final result, and while we all appreciate Barcelona’s unique style of play, there is a growing belief that the result really is more important than the process.

Tiki-taka or something a little more direct; some Culés may not have a particular preference, just as long as the end result is favourable. Thankfully, that hasn’t been much of an issue for the Blaugrana in 2013... 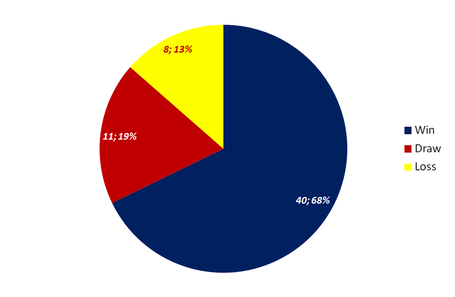 And if anything, the future looks bright for FC Barcelona. Since Gerardo Martino took over the reins from the departing Tito Vilanova, Barça’s results have actually improved in every imaginable way. For example, Barcelona’s win percentage has increased by nearly 20% while on average the club is scoring more and conceding fewer goals per game.

Over the course of the year, Barcelona used 29 different players, four of whom have since left the club – either on permanent deals, or on loan. Surprisingly, of those individuals, Andrés Iniesta made the most appearances, featuring in 54 of Barcelona’s 59 competitive matches in 2013, while predictably; Lionel Messi topped the scoring chart with 39 goals in his 40 appearances for the club.

Interestingly, the oft-criticised Pedro struck 22 goals across 2013, while Chilean forward Alexis Sánchez grabbed 18 goals to silence some of his critics. Furthermore, despite leaving the Camp Nou in search of more game-time, Thiago Alcântara has featured in half as many matches for his new club compared to the first half of 2013 that he spent at FC Barcelona.

And while Lionel Messi topped the scoring charts, he was perceived to have declined in 2013 – not just by pundits and journalists, but also by this very community.

Instead, we welcomed a new star to Catalunya: Neymar led the squad with an average rating of 7.74 over 2013, with Messi close behind. In roughly half as many appearances as the great Argentine, Neymar also secured 12 Man of the Match Awards, far eclipsing the total amassed by Barcelona’s "ironman", Andrés Iniesta.

So what does the future hold for FC Barcelona? Certainly early signs suggest that Neymar will continue his spectacular debut season in style, and the Brazilian could cement his place as one of the world’s best players with a strong finish to the season. Similarly, young defender Marc Bartra could emerge as a first team regular if his 2013 form continues, while despite rumours to the contrary, veteran midfielder Xavi Hernández is performing as well as ever – even if he is ageing, Xavi remains one of Barcelona’s best players.

And Barcelona have every reason to be confident under the guidance of Gerardo Martino. The Argentine has been nothing short of terrific since he took over from Tito Vilanova – and with the likes of Pedro and Alexis Sánchez finding form, he will be confident of the team’s chances in 2014, particularly with Lionel Messi set to return from injury.

However, there is cause for concern. Cristian Tello’s development has somewhat stalled over the past 12 months – a loan move away from the Camp Nou could certainly benefit his career, although it would leave the Blaugrana short of options in attack should injury strike. Javier Mascherano and Alex Song are also tipped to be looking for new clubs, and again, while neither have particularly impressed over the year – certainly not in line with their huge salaries – their departure would impact Barcelona’s squad depth, which is hardly impressive at the best of times.

Similarly, Victor Valdés has been ranked as one of our best performers, but will leave at the end of the summer. Can rumoured successor Marc-André ter Stegen cope with the pressure if he does indeed replace Valdés between the sticks next season?

Moreover, will the unrealistic pressure from an expectant fanbase impact the team? Even after a Clasico win and a table-topping start to the season, some Culés are anticipating the worst ahead of Barça’s upcoming clashes with Atletico Madrid and Manchester City.

What will 2014 hold for the Blaugrana? I for one cannot wait to find out.

Happy New Year and above all, Visca el Barça!