The Evolution of Cesc Fàbregas

The Barcelona midfielder is in great form and has adapted his game since moving back to Barcelona.

Share All sharing options for: The Evolution of Cesc Fàbregas

The Catalan grew up through Barça's La Masia with friend Leo Messi and best friend Gerard Piqué. The talent of the young stars was clear but Fàbregas grew tired of his lack of promotion and made the bold move to Premier League side Arsenal.

Under the influence of Arsene Wenger, Fàbregas devolved an edge to his game, learning new skills and combining them with the ones he learned in La Masia. The midfielder's progress was much more rapid through the Arsenal ranks and by the start of 2008-09 season, Cesc was club captain.

When Fàbregas eventually made his homecoming switch from the capital of England to the capital of Catalonia critics claimed he would not be good enough to break into the first team. "Good luck displacing Xavi and Iniesta" and "enjoy your view from the bench" were some of the snide comments made by pessimistic pundits.

But a year and a half later, the Barcelona number four can boast being a regular first teamer and crucially one of the most consistent ones. During his early months with the Catalans, Pep Guardiola allowed Fàbregas to not take up his fair share of defensive duties and to re-familiarise himself with the Barça way. This naturally brought a healthy run of goal scoring for Fàbregas but as the player picked up more and more defensive duties, his goals tailed off and he faced unjust criticism once again.

Fàbregas finished his first season back at Barcelona with 15 goals and 11 assists in 38 appearances and headed to Poland and Ukraine for Euro 2012.

Similar to teammates, Iniesta, Piqué and Alba, Fàbregas performed well for Spain at Euro 2012. Shoqing his willingness to adapt, the number ten filled the false-nine role for Spain and proved to be an effective player in that position. 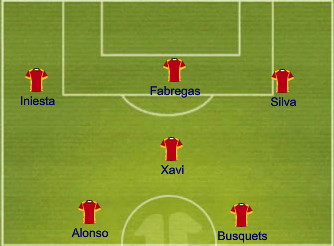 Scoring the team's tournament opening goal among others and assisting David Silva in the final, Fàbregas was alternated with Fernando Torres as Del Bosque finally found a way to include the Barcelona playmaker. 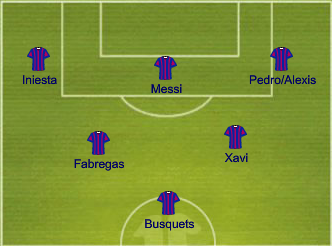 Vilanova has pushed Iniesta over to the left wing to allow Fàbregas to play centrally alongside Xavi. I have spoken before of the impact of having Xavi, Iniesta and Fàbregas on the field at the same time and I believe the player who has shone brightest this season has been Fàbregas.

He now sees the ball much more frequently and has started to dictate the play as much as the likes of Xavi and Iniesta. He also has a superb first touch and his close control has helped find space in congested areas, a problem Barça succumbed to last season.

A criticism of Fàbregas last season was that he was unable to play with Xavi. But this season he has shown his capabilities and pitched in with his fair share of goals and assists. After eighteen starts in the league his passing success rates stands at 88.7% and has completed nine assists. Granted this is not on the scale of a player like Xavi but it does show growth from Fàbregas who achieved only eight assists during last season's La Liga campaign.

With Fàbregas' development, the strain on Xavi and Iniesta has now been relaxed and Barcelona are less likely to face burn-out towards the end of the season. In the next two months Barcelona face a second leg Clásico in the Copa del Rey, two Champions League ties against Milan and a league Clásico away at the Bernabéu. Crucial months for the Blaugrana and squad depth will be truly tested.

Having an improved midfielder such as Fàbregas is an important weapon in Tito Vilanova's arsenal. A tool that could be the difference between a trophy-laden season and a bitter disappointment similar to last season.

After this run of games Fàbregas can be truly judged on how far he has progressed since the emerging talent that returned to Camp Nou and can finally silence his critics, if he hasn't already.