With Thiago Alcantara's exit this past weekend, the pressure on Sandro Rosell to answer tough questions has never been greater. But let's not forget that Tito Vilanova needs to clear the air on the Thiago situation as well. Many eyes will also be on Sergi Roberto, as he becomes the midfielder who will get his opportunity to shine.

Share All sharing options for: Why Thiago’s Exit “Calls-Out” Rosell & Tito for Answers

On Sunday, the inevitable finally happened, as Thiago Alcantara left FC Barcelona. The 22-year-old was sent to FC Bayern Munich for €25 million. Bayern agreed to pay €20 million, while €4 million will come from Thiago taking a pay cut. The final €1 million will be given to Barça from the friendly game both team will play later this summer.

In this article/editorial, I just want to share my thoughts on this issue, since I have remained fairly quiet on this issue ever since it began.

For starters, I am not going to say that I am upset or even mad at Thiago. He is a superb talent who, unfortunately, was not properly "handled", if you will, by Tito Vilanova, and thus he leaves.

And to a team with plenty of midfield talent in Bayern. I understand Pep Guardiola had the biggest influence, but by most football standards, perhaps Thiago would have been better off joining Manchester United. Then again, Man Utd messed up, and did not finish the deal to sign Thiago.

Let's give credit to Pep Guardiola. He has faith in Thiago, and he really wanted him in Bavaria. It also helps when your brother is Thiago's agent. Nevertheless, Pep has shown faith in Thiago, and Tito has not. This is one of, if not, the main reason Thiago Alcantara will be playing in the Bundesliga, not La Liga.

So now what happens next?

Sandro Rosell is expected to talk to the media on Monday, and on Tuesday, Tito Vilanova will has a press conference to talk about the team's preseason. But let's be real: no reporter will be asking Rosell or Tito about the upcoming preseason. It will be all questions about Thiago's departure, and what signings the club is planning to make.

Does Barcelona need to make more signings? Of course they do.

The biggest need has not been filled: a centre-back. With PSG rumored to be closing in on AS Roma's Marquinhos, and Thiago Silva's agent telling the press that the Brazilian will not be leaving the club soon, Sandro Rosell needs to act and act quickly to secure a major defensive signing. With the money Barça got from the Thiago deal, they need to turn around and use it to sign a defender.

In my opinion, Sandro Rosell and the rest of the Barça club officials cannot let PSG take away Marquinhos as well as keep Thiago Silva. Both players were on Barcelona's shopping list of potential singings, and to not get one would be a disaster for Rosell and the club. Barcelona would have to resort to second-tier defenders like Adil Rami, or injury-plagued CBs like Daniel Agger or Thomas Vermaelen.

Let's be clear: Barcelona will end up overpaying for a defender. That's what happens when it reaches this point of desperation.

Who will replace Thiago?

Now with Thiago gone, the pressure to fill his shoes falls on Sergi Roberto. The 21-year-old has been waiting for his moment for years, and now that it's here, let's hope the kid will shine. Sergi was actually a favorite of Pep Guardiola, who played Roberto in the final minutes of the famous 2-0 win over Real Madrid in the 2011 UEFA Champions League semifinal, 1st leg, as Sergi made his CL debut.

I know this sounds corny, but all Culés must support Sergi Roberto, and give him a chance. He may not be Thiago Alcantara when he starts this coming season, but this kid has incredible talent, and it's not fair to the kid to compare him to Thiago. Let's let Sergi be himself, and not constantly be saying "Thiago who?" if he does good, or "He's no Thiago!" if he struggles. Give him one season, at least.

Besides, the kid's got enough pressure trying to earn a start each week when he has to compete against Xavi, Andres Iniesta, and Cesc Fabregas.

One last thing I will say about Sergi Roberto: the kid wants to be at FC Barcelona, and has been patient for his time to come-something we can't say about Thiago Alcantara.

Very important weeks ahead for Tito and Rosell

These next few weeks will be very interesting for both Sandro Rosell and Tito Vilanova. For one, Rosell will need to work with his people to sign defensive help. Will they offer more money for Marquinhos? Can they somehow convince PSG to sell Thiago Silva? Will Rosell call Chelsea and ask about David Luiz? These are just some of the options Rosell will mull over the next few weeks. Also, will Rosell look to sign a midfielder to help fill the void Thiago left? There have been rumors about Juan Mata, İlkay Gundogan, and Mathieu Valbuena being looked at, but those signings would cost lots of money on a position that's not the main priority of needing help, which is centre-back.

One person who has not been put under much pressure has been Tito Vilanova. Given the man has had his health issues to deal with; the Barcelona manager has not come under too much pressure by the media. I say that changes now. This is business, not personal. Tito has to be accountable for the Thiago Alcantara situation. If Tito would have played him more this past season, this team would still have Thiago. 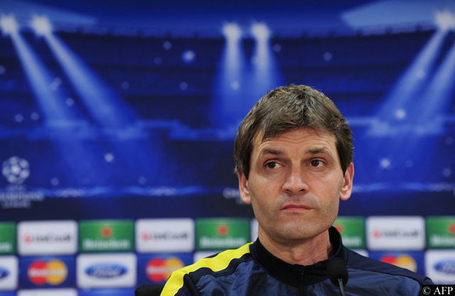 REMEMBER: It's not all Sandro Rosell's fault, even though fans and the media like to make it out like this. Rosell is at fault for many things, but others like Tito Vilanova share the fault as well.

Also, Tito has been a bit too stubborn when it comes to Thiago Silva. All he wants is Silva, and appears not to want to consider another defender. Tito needs to feel a bit more pressure on this issue. I'm sorry, but Thiago Silva is not the only defender that is capable of playing for this club. Yes, Silva is the best in the world, but we also have to accept realities. PSG don't want to sell him, and if they do, it will be for an extreme price of over €45 million.

Time to open up more, Tito. Stop making things more difficult than they already are.

Sorry for coming off as mean against Tito, but I'm just calling it as I see it.

These next few weeks will be very interesting in Catalunya.

I believe Sandro Rosell's fate is already sealed, and he will not be re-elected for presidency in 2016. I believe he's upset too many club members with his recent decisions. Plus, the fact that Pep Guardiola left and is now not too friendly with the club has only made things worse for Rosell's reputation. I believe Joan Laporta will run again, and will win in 2016.

Do you want to know who may even end up being Laporta's first signing in 2016?: Thiago Alcantara, who will be 25 years old by then, and will be entering the final year of his contract with Bayern Munich. A Cesc Fabregas-esque "coming home" situation is very possible.

But until then, I say "Adios Thiago!" and I hope you one day come back home.

Sandro Rosell, you made one great signing this summer in Neymar. Now it's time to get to work again to save face, and sign one or two more players. Just make sure a defender is the priority.

As I always say: let's not make things more difficult than they already are.