Next up for review is Jordi Alba, FC Barcelona's primary left-back, who completed his first season for the Catalan club.

Report: Jordi Alba, the little speedster formerly of La Masia, was one of two signings FC Barcelona made after the 2011-12 season. The left-back joined the Catalan club from Valencia after the two clubs agreed on a €14 million transfer fee. From an offensive standpoint Alba was more than worth that fee, but defensively his playing style exposed Barcelona vulnerabilities.

In the past Barcelona played with only one offensively oriented full-back, mostly Dani Alves, but with the addition of Alba that changed. Alba added an extra dimension to Barça's attack, showing remarkable chemistry especially with Andres Iniesta. But what Jordi added on offense he cost Barcelona defensively.

Of course, he wasn't solely responsible for all the added goals the team allowed compared to last season, but indirectly he was at fault for a good amount. Due to the failure to make defensive adjustments to the system Barcelona often found themselves outnumbered, many times leading to easy goals. But it has to be said that when Alba was well positioned in defense he was not a liability. He might not be Javier Mascherano when it comes to tackling, but he will always make it difficult for the opponent to get past him, even at the risk of a yellow card. 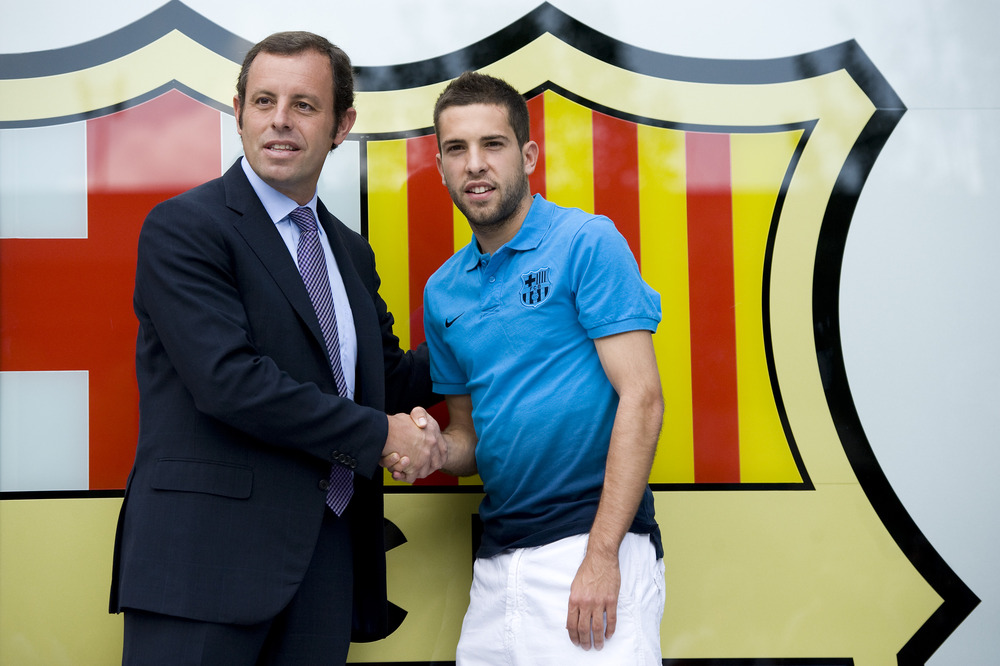 But let's be honest, Alba wasn't acquired to improve Barcelona's defense. He was brought in to give the team yet another option in attack, and in that area he did not disappoint. Despite playing away from Barcelona for the past seven seasons Alba played like he never left, fitting into the (attacking) system perfectly. His passing was excellent and his crosses more often than not found its target. But it was the left-back's speed that caused most problems to the opposing defenses. That combined with Alba's ball control proved to be too much to handle for most opponents.

On international duty Jordi was a key member for Vicente del Bosque's Spanish national side. Playing 17 games over the last 12 months at his natural left-back position Alba was an offensive threat once again. Scoring four goals, including one in the European Championship Final and two in the Group Stage game against Nigeria in the Confederations Cup, and adding one assist he was one of the leaders of the Spanish team that was crowned European Champions and finished the Confederations Cup in second place.

Moment of the season: Alba had plenty of highlight reel worthy moments in his rookie Barça season. He scored his first Blaugrana goal against Deportivo la Coruña, though, he also scored his first Blaugrana own-goal in that same game. He was also unstoppable in matches against Celta Vigo and Espanyol, but his arguably best game of the season came in the second leg against AC Milan. Alba caused the Italian defense problems the entire game and was even able to score the last goal of the tie. But he was also defensively sound on that day, notching four interceptions, two clearances and a tackle.

Record with Jordi Alba in the starting lineup: 28-6-7

2013-14 Outlook: Alba will enter the 2013-14 season as the starting left-back for Tito Vilanova and FC Barcelona. He should log about the same amount of playing time as he did this season because his playing style warrants him rest about once every three games. If utility defender, Adriano, remains healthy Alba will get enough time off. It would be unrealistic to expect Jordi to duplicate the offensive numbers he posted this year, especially the number of goals, however, he could improve in the assist category.

Next Up: Adriano Correia