Does Sergi Roberto's Promotion Mark An Era Of Change At FC Barcelona?

In a summer of change at the Catalan capital, 21 year-old midfielder Sergi Roberto has replaced the departed Thiago Alcântara in Barcelona’s first-team squad, raising a number of questions about Barcelona’s future midfield

Share All sharing options for: Does Sergi Roberto's Promotion Mark An Era Of Change At FC Barcelona?

In the face of adversity, FC Barcelona has typically triumphed by staying true to their ideals. Promoting from within, with a continued emphasis on passing and movement has been the strategy for years of success, both on and off the field. In almost every aspect of the game, Barcelona have been the universal "gold standard"; but now, after two seasons of relative disappointment, the Blaugrana are evolving – making a conscious decision to change their ways.

Understandably, Barça president Sandro Rosell is perhaps guilty of creating a "siege mentality" at the club as petty squabbles dominate the headlines – this is no longer a club that takes the moral high-road, this is a club that’s developed a bitter streak and after multiple seasons of provocation, we’re no longer afraid to bite back.

Take Pep Guardiola as an example; he deserted the club for whatever reason back in 2012, and as a result, his relationship with the board (and to an extent, with the fans) has been frosty ever since. No longer a saint, Pep Guardiola has even been painted as a villain in recent weeks, particularly alongside fellow "traitor" Thiago Alcântara.

In need of a fresh approach, Barcelona turns to Gerardo Martino 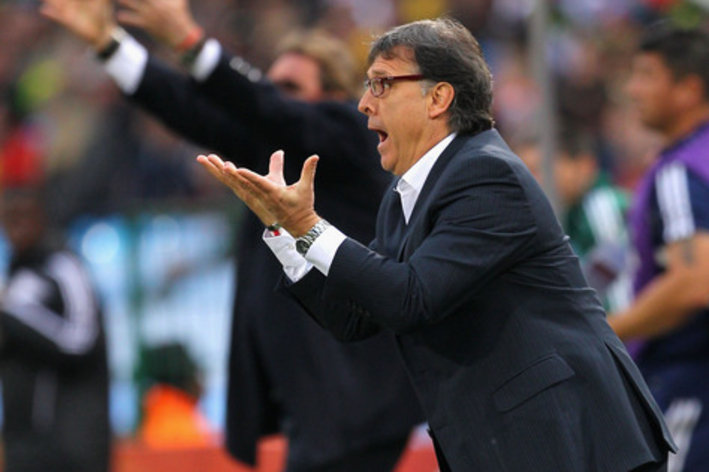 Last season's loss to Bayern Munich might have served as a bit of a wake-up call for Barcelona. Instead of hiring a big name or in-house coach that could pick up where Pep and Tito left off, they've turned to a different kind of manager entirely

Just like Pep, Thiago had valid reasons for leaving the club – and publicly, the players have been keen to show their support for their former colleague, congratulating him on his €25 million move to Bayern. Yet, there’s a sense that following his transfer, Barcelona are doing their best to almost "tarnish" his reputation – to soften the blow of his exit if you like.

No longer is Thiago a "good player", he’s an impatient player; more concerned with personal goals than with helping the team – hardly a typical La Masia trait, and therefore, we should be pleased that he has left. Who needs players like that when you have Sergi Roberto?

At the age of 21, Sergi Roberto is just ten months younger than Thiago; but has already demonstrated great patience. Biding his time in the B team, Roberto has waited for four seasons to get his chance in the senior squad – and is yet to complain about a lack of game-time, or insert a clause into his contract. Instead, he’s knuckled down in the hope that one day his faith and dedication would be rewarded.

It’s an inspiring story, in stark contrast to Thiago’s rise to prominence – and Barcelona haven’t been afraid to use it.

"Sergi Roberto, the patient midfielder" – even the official website has used Roberto’s loyalty as a "weapon", although fortunately, the player himself hasn’t resorted to such measures in an attempt to win the support of the Camp Nou crowd. Instead he’s let his football do the talking; starting last night’s friendly match with Bayern Munich, Sergi Roberto offered us a glimpse of the future – of his future, with the club.

Unlike Xavi, Busquets and Thiago before him, Roberto is not your typical La Masia midfielder. Sure, he’s comfortable in possession and more than capable of picking out a pass, but there’s an extra dimension to his game – a dimension that we’re not entirely used to seeing from a Catalan midfielder, and that’s physicality. Roberto isn’t afraid of a challenge, nor is he content to wait around for the ball to find him; instead he throws himself into the action with youthful enthusiasm, making a difference at either end of the pitch.

Defensively, he is a menace, harrying the player in possession until they either give the ball up, or move it onto someone else – at which point Roberto is on the move again, always searching for the ball. Equally, Roberto have also proven himself adept at reading the game, intercepting potentially dangerous passes before they can reach their target, a trait that could prove invaluable given Barcelona’s fragile defense.

Offensively, Roberto offers a "directness" and "unpredictability" that can frustrate opposition defenses – in his one meaningful start last season, Roberto’s livewire style drew the attention of the entire Benfica midfield, as the UEFA Europa League finalists combined to foul Roberto a staggering six times (which is more fouls than Barça committed in the entire match). Even at such a young age, and with such little experience with the first-team, box-to-box runs have almost become Sergi’s trademark – with our very own editor Inder Methil likening his late surging runs into opposing penalty areas to that of Frank Lampard’s, who recently became Chelsea’s all-time leading goal-scorer.

And it’s these ghosting runs that helped Roberto score his two goals with the senior squad – one against BATE Borisov and another against Osasuna. With a little more luck, and a fraction more composure, Roberto could have even tied the score yesterday, but off-balance from Jerome Boateng’s challenge, he toe-poked the best chance of the match wide of the target.

Still, it was an encouraging sign for Roberto who stood out as Barcelona’s best midfielder from last night’s performance, even ahead of €19 million signing Alex Song.

He might not possess the effortless talent that Thiago was renowned for, and he may not be able to truly control a game, like Sergio Busquets or Xavi, In fact, he’s not even a particularly decisive player, like Andrés Iniesta or Cesc Fàbregas; Sergi Roberto is just different, an amalgamation of multiple playing styles – he’s a player with talent, but defined by effort.

Above all else, Sergi Roberto is just exciting – and with a new coach to impress, expect Roberto to establish himself as a valuable member of this ever-changing squad.