FC Barcelona looks to continue its winning ways with new manager Gerardo "Tata" Martino now at the helm. Is the tiki-taka now dead? What is Martino's style of play that he will teach? What are the pros and cons of Martino has manager? In this article, I decided to give you my reaction and thoughts on Tata at Barça.

Share All sharing options for: Welcome, Tata!: Xoel’s Take on The New Boss

After two weeks that saw FC Barcelona lose Thiago Alcantara to Bayern Munich, and without question the biggest blow to the club in Tito Vilanova having to resign to dedicate his full attention to treat his illness, the Catalan giants will march forward with former Newell's Old Boys manager Gerardo "Tata" Martino as their new manager.

Martino signed a two-year deal, and will also bring two of his Newell's assistants with him to the Camp Nou.

Here are my thoughts on the new manager. Remember, you may agree or disagree, but please be respectful in the comments section.

First off, I must admit that I was not a fan of the idea of bringing in Tata when I heard he was a candidate. I felt his lack of any experience managing in Europe, his Marcelo Bielsa-like approach to managing (he was Tata's coach and mentor), and the clash of footballing cultures (Spanish football vs. South American football) would hurt FC Barcelona.

I am not as familiar with Tata Martino as I am Luis Enrique or some of the other managers that were linked with the Barça job, so I was a bit ignorant to judge/assume Martino's tactics and his managing other than what I saw when he was managing Paraguay a few years ago and the few Newell's game I watched this season. I knew he was aggressive on offense, but I felt like I needed to do more research. So, I decided not to write an article this past weekend, and instead, dedicate the weekend to reading up on Tata.

After reading some great articles on Martino and his managing skills, I've been won over.

As I mentioned, Martino has always put an emphasis on making his team tactically aggressive on offense. Of course this will be beneficial to FC Barcelona. I am confident the players will not need to adjust too much to the tactics Martino will teach them. Remember, Pep Guardiola was/is a "Bielsista" as well. In fact, Pep visited Bielsa in Argentina prior to Pep managing Barcelona. Also, Martino has been known to work well with his players, allowing them to continue their style of play without trying to change it completely.

One major question all Culés are wondering is now with Tito Vilanova gone and Martino in, is the "tiki-taka" dead?

The tiki-taka will still be there; it's just going to go through a new change. When Pep left Barça, Tito kept the same philosophy. Tito added more player independence to the tiki-taka. Tito let the players dictate the play, while Pep is a bit more "hands on" when it comes to how his players work. With Tata Martino, we'll see what he does to add on to the tiki-taka. 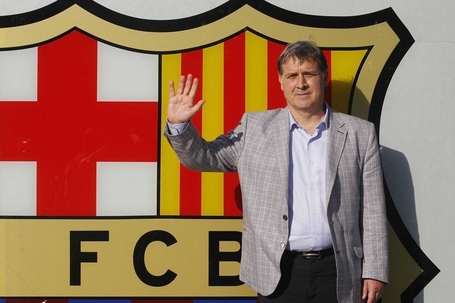 My concern with Martino's system is that Messi will not want to stay up on attack. It's Leo's natural tendency to move back to the midfield and work alongside Xavi and Andres Iniesta to then go on attack. If that happens, we're looking at a 4-1-5-0, not a 4-1-4-1. Another concern is how will the Barça back line play under this new style of defending. Tata's offense calls for the full-back to move up, but as we all know, that has been one major flaw in recent years with this team. The centre-backs need as much help as possible. Send Jordi Alba and Dani Alves flying up front too often is a recipe for disaster. I'm positive Sandro Rosell and Andoni Zubizarreta will sit down with Tata sometime next week to talk possible signings. One name that has come up is Newell's CB Santiago Vergini.

Finally, my last major concern is based on what I have read on multiple reports on Tata Martino's teams: they tend to run out of gas late in the season. We have all seen Barcelona run out of gas these past two seasons in the UEFA Champions League, so it's nothing new. But will Martino's system further enhance this? I'm not sure, but I hope not. I worry that our older players like Carles Puyol and Xavi will run out of gas-especially Xavi. With Thiago gone, Xavi will have extra midifielding duties late in the season, and that could be a big problem.

What does not concern me about Martino's system is pressing on offense. Some would say that is what Barça needs to do more often: be more aggressive on offense. Neymar will play a big role in this. Another factor I like about Martino's system is the fact that Busquets would quickly drop back to play sweeper on defense. The defense needs as much help as it can get, and this is a good start.

Tata will more than likely utilize the Masia products more than Tito did-with all due respect to Tito. From everything I've studied about Martino, he uses his second division/youth products players quite well.

When asked about what will be one of his first priorities at FC Barcelona, Martino said on Tuesday that it's getting to know his players on a personal level. "The day to day work will make us feel comfortable. The first thing we have to do is start work in order to establish personal relationships," said Martino. As far as playing style, Tata said it's up to him and his staff to adjust to Barça's style, while at the same time, adding his own personal touch to the tiki-taka. "We know Barça's history and we know that they follow a defined style of play. We have to see what we (he and his staff) can bring to a set of players who are very good. Barça have a define style and we are the ones that have to adapt to it."

I know for most Culés it will be tough to adjust to seeing a new manager on the Barça bench, especially one that we may not be too familiar with. But while we will all miss Tito Vilanova, and wish him a speedy and full recovery, we must unite, trust, and support Gerardo Martino completely. He is a proven winner, and he needs all Culés to back him up.